Dishonored 2 treks through the streets of Duke Abele's new palace district as we make our way to the last of Delilah's allies. 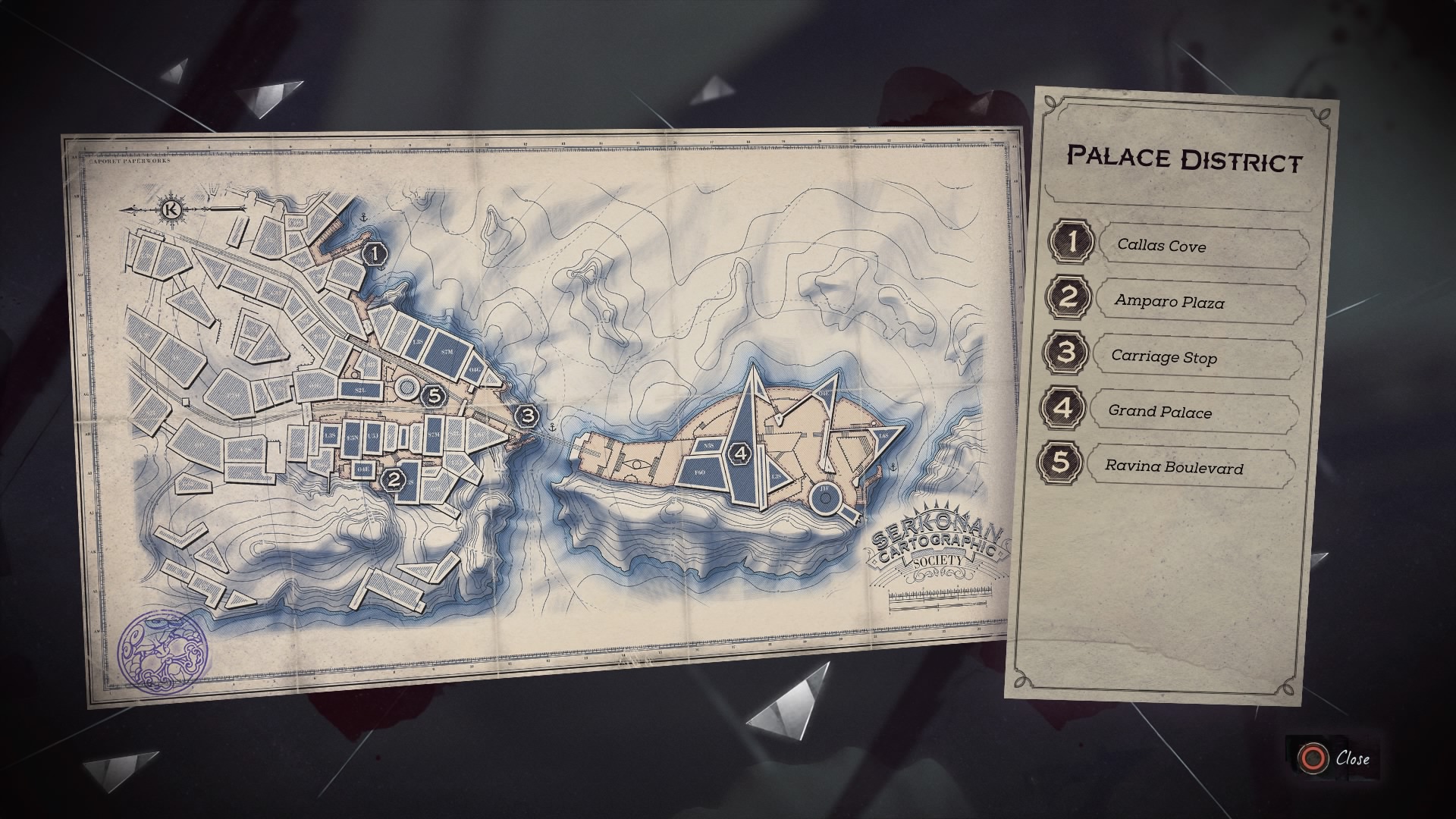 The map above shows the layout of the Palace District, AKA Ravina Boulevard. Here's a handy link to open the cleaner version in a new tab.

The objective in this part of the mission is just to reach the next area. There are two ways through the security checkpoint at the area border: a door behind a heavily guarded wall of light, and a door inside a locked apartment, for which you'll need to track down a key.

Only one of the mission's special actions is achieved in this area - the Black Market Heist.

There are three bonecharms to collect along with three runes including those on the single Outsider shrine. You can also collect one painting and one blueprint.

There’s not much to do in the Dreadful Wale on this visit. Collect Audiograph: Losing Deirdre from the top of the stairs and Audiograph: Decisions in Sokolov’s room.

Go out on deck and grab the Grand Palace map from the table, then talk to someone to kick off the briefing. If Aramis is alive and sane, he’ll give you a keen hint for your infiltration.

Search the fishmonger on the docks from some raw whalebone and minor loot. Proceed along the path and eavesdrop on the smugglers - we’ll come back for them as their boat is locked up tight right now. As you pass a shop on your right, pickpocket the civilian and loot his cash register. Moving forward there’s a blocked gate you can zip over and open, but there’s nothing there to reward this problem solving. Grab the Palace District map from just past here.

The path now splits. Go right and give the beggar some coins for a tip. Don’t eat his bread but do steal his minor loot, then continue up the stairs. You’ll eventually come out on a street lined with shops. Turn around and zip up to the balcony above and behind you. In this sculptor’s studio you’ll find a black bonecharm (open the vice to get it out) and some raw whalebone.

Cross the street of shops to Winslow’s Safes. Don’t bother trying to save the shopkeeper from the guard shake down - he alerts the others, the ungrateful beggar. When the guard is gone, collect Document: Gate Code, Document: Apartment Seizure and some minor loot, then wait till the shopkeeper wanders upstairs again to loot the cash register for the Apartment Key. Pickpocket him, too - why not?

Zip over to the sculptor's balcony again to evade the guards in the street, then face Winslow’s Safes. Zip over to the right side of it. Before you go down the alley, grab Book: Death in the Month of Songs, Document: The Silver Spike - Popular Shops Burglarized! (/cough) and some minor loot from near the two gamblers. In the alley, collect Document: Gate Must Remain Closed and enter the code from the document you got in the safe shop.

As you advance you hear the smuggler captain chatting with the Black Market Shopkeeper at the back door of the shop (we'll go in the front a bit later). Hide and pickpocket her twice for the key. Go back to the boat and you’ll find the guards robbing it - or more likely that they’ve been and gone. Loot the bodies and collect Document: Confiscated Merchandise from the boat. We’ll track the cargo down later, don't worry.

Go back to the Black Market Shop and climb up onto the grassy area to one side of it. Hug the right wall as you advance to break some boards and hit an Outsider shrine with two runes; you can also pick up Book: Old Stolen Diary, Book: Old Charm Carver’s Writings, and some raw whalebone. Go back to the wall of the building and hug it as you sneak onto the balcony to get the drop on two Howlers who are part of an ambush you’re avoiding. Don’t hang about here or the one opposite will spot you.

Zip up to the window at the end of this balcony to collect Document: Note from Petronilla, then sit on the railing and look across the street. You can zip to an open window and ambush the howler there - the one in the lit apartment who could have spotted you earlier. Grab the Rockwell Mines loot item and some nice minor loot in here, too.

Go down to ground level away from the key ambush zone and look for a tripwire. Disarm and loot the trap, then check a dumpster with some bodies for minor loot. There’s another Howler in this ambush and no really good way to get to her: she’s in the lit shopfronts underneath the apartment where you got the third one. If you sneak across the street you can ping her with a sleep dart, though. Loot her for Key to Petronilla’s Apartment, then put her body in the dumpster with the others. Did you think the ambush was done? No, oh, no: one more Howler awaits you inside the Black Market Shop across the street. The best way to get him is to throw a bottle (or a doppelganger, or yourself) in the door; nothing else seems to make him come out. If his patrol seems .. erratic, after this, reload and try again.

Now you can go shopping. This ambush probably has something to do with the Black Market Shopkeepers feeling they need a bit more protection … but as usual, only buy upgrades and we’ll steal everything else.

But for now, more burglary awaits. Zip up to Petronilla’s Apartment and take Document: The Silver Spike - The Outsider Walks Among Us. You’ll find some minor loot in here but the real prize is the Silver Snuff box loot item.

Go back down to the Howler ambush area and head for the corner with the dumpster full of bodies. Break the boards over the doorway and go down the passage. As you approach the door at the far end, a guard says “hey, where did you go” and patrols out, closing the door behind him, which is deeply mysterious. The best way to avoid him is to motor up the stairs as soon as you come in, then get behind him for an ambush as he goes to investigate the broken boards. The room he was in contains some good loot including the Serkonos Canal loot item and Audiograph: Black Market Code. This is the missing haul from the smuggler’s boat, by the way.

Go up to the top floor of this building and ambush the guard and the elite guard; the one playing dice doesn't notice the other go down. You can disable the windmill here; nobody ever seems to come and check on it although the guards below do notice every time you load your save. You may as well disable the watchtower while you’re here. Use the watchtower as a perch to look one level down from the windmill to spot a pair of balconies. Zip onto on the one blocked by white shutters and be patient; a nestkeeper will come into view, and you can sleep dart him through the gap. Go inside and take out the bloodfly nests to collect a rune and Painting: Daud and the Parabola of Lost Seasons, as well as Document: Letter from an Admirer of Daud and Book: The Knife of Dunwall. You don’t think this nestkeeper could be…?

Getting out of the flat is far easier than getting in - just chop the boards at the door and climb over the debris. I couldn’t make this work in the other direction, unfortunately. Anyway, with code in hand return to the Black Market Shop back door. The shopkeeper will open the door, but if he catches sight of you when you enter he’ll run and alert the guards, so stay outside and lean in to sleep bolt him. It’s not a very good haul this time - the Disable the Carriage Rail paper is the key item to grab, but there’s only a little minor loot in here otherwise.

Go right back to where you met the beggar, and then a little further to where the road splits. Take the other path this time but zip up to the big platform around the tree when you can, to avoid the many guards below. From here it’s pretty easy to get onto the balcony across the street. Collect Document: Note to Lucia Pastor’s Mother and some minor loot as well as a bonecharm under the bathroom sink. There’s some minor loot in the flat one floor down but it’s super not worth the effort of getting through the two guards and the civilian, who is hyper alert for some reason.

If anybody tells you there’s a blueprint down among the many guards in front of the wall, laugh merrily - it’s one you should have picked up ages ago so you won't find it if you did. The only reason to go down there is to pickpocket and grab Document: Grand Guard Returns to Dust District, which, like - no? Super not worth it if you’re trying to ghost.

Instead let’s get to the apartment adjoining the palace - it’s at the end of the street on the same side as the last one we robbed, and the only way in is via the very well guarded front door. Find a gap in the patrols and zip through. Upstairs you’ll find an apartment door you can unlock. Inside, collect the Underwood Cigar Box, some minor loot and a bonecharm under a cushion on the bed - hit it with your sword to move it. By the loo you’ll find Document: The Silver Spike - Mystery Women Leave Conservatory. You’ll also want to grab Blueprint: Small-scale Combustion Refinement from on a desk. Above the desk is a silvergraph of a man in front of a safe. Zoom in with your spyglass to read the combination and enter it on the real safe just outside. There’s only cash loot inside.

And that’s it - we’re done. Go through either of the doors in the apartment to enter the Grand Palace and begin the next elimination.