Instead of an E3 booth, Devolver Digital revealed Devolverland Expo, its FPS minigame that lets you watch upcoming release trailers and hunt for rare collectibles.

In amongst the game booths, lasers and flying robots, you'll be able to find items that will unlock a special screen at the end of the game that hints at three mystery unannounced games. As this is Devolver we're talking about, that's all you'll be getting, so don't get too excited.

You can explore the expo and earn different achievements for watching trailers, finding items and, of course, avoiding those aforementioned lasers. So, let's take a look at where you can find these shiny collectibles.

Devolverland Expo: Where to find every collectible

To get started, use the fuse box next to the entrance to gain access to the expo. Once inside, hug the wall to the left and keep going until you find the Devolver merch booth and pick up the gun. 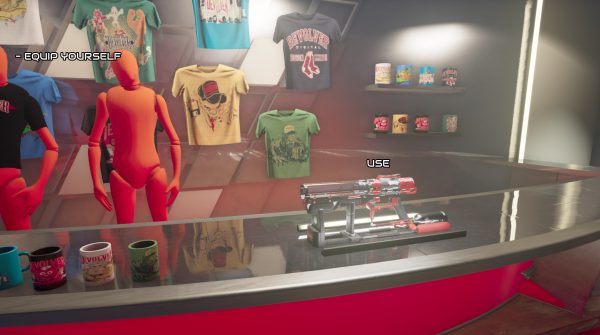 Once you're in the South Hall, you'll find your first collectible to the left at the Nvidia booth. It's a book sitting on a desk, so go ahead and pick it up to unlock the first collectible for Unannounced Game 1.

Next, take a wander over to the Carrion booth. To the right of the big screen you'll see some stairs, so head up them to find a teacup on one of the PC desks, which unlocks the collectible for Unannounced Game 2. Come out of the Carron booth and turn left and follow the path round to find the Weird West booth.

Just as you enter the area, you'll see a plastic bag sitting on the floor, which you can collect for Unannounced Game 3. There's a second item to be found up at the general store in the area to your left.

Carry on out of the area and you'll come across a cherry picker lift. Climb in and interact with the panel to raise yourself up to find the next collectible. It'll be on top of the boxes once you reach the upper level.

To get through the laser section, it's easier to slide under using the crouch button - CTRL - until you reach the last grid. Instead, if you look to your left, you'll see a red security bollard as you did at the beginning, so shoot that to deactivate the grid.

You'll see a boardroom with a screen rolling credits and in there you'll find another collectible on the table. You'll eventually end up outside, so interact with the panel near the fan to halt it by flipping switches 2-0-2-0; there's a wee clue next to the panel as well.

Climb into the vent and follow the paths and you'll see that there's a connection between two routes. In the middle of the connecting tunnel, you should find a book you can pick up.

Shoot the grid overlooking the expo centre to escape the vent and access the Blightbound and Olija areas. In the Olija booth, you'll see a plastic bag on the end of the spear you can collect and in Blightbound, you'll see a book on the edge of a desk.

If the Olija booth is in front of you, turn to your right and head to the Serious Sam 4 booth. You'll find a plastic bag near a pile of bricks on the stage that you can pick up.

In the next room, shoot the red floating robot that's nipping about and climb up the Fall Guys exhibit to enter the area. To the right of the screen there's a ramp, so climb up it to find the next collectible.

Finally, enter the Shadow Warrior 3 area. You'll find the final collectible - a gold plastic bag - sitting on the left of the statue. After that, use the zipline to enter the expo area and pick up the glove so you can enter the VIP area.

You'll fight the expo boss, which shouldn't take long. You can use the glove to launch chairs and boxes at him, as well as return any projectiles he fires at you.

Once he's dealt with, head to the exit at the back and providing you've collected each of the collectibles, you'll be treated to a webpage that says three unannounced games were discovered. Unfortunately, we don't know what they are or when we'll find out, but it's a nice teaser all the same. 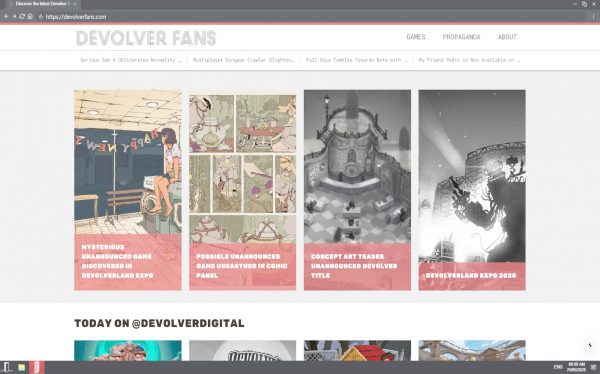 You can visit the Devovler Fans site here for a recap on the Devolver presentation from the weekend. If you watch all of the game trailers, you'll get achievements for doing so, as well as avoiding the lasers and landing a hit on one of the robots.