If the new Public Event has you stumped, we've got you covered with everything you need to know before you head in. 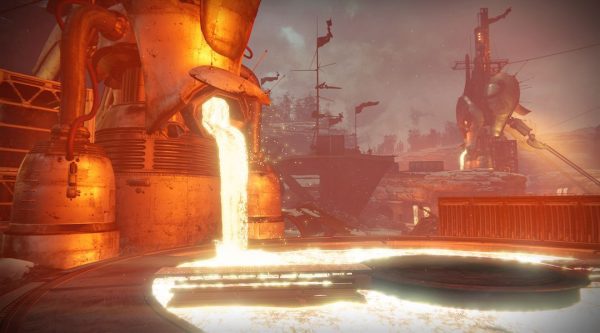 Not what you're after? Our Destiny: Rise of Iron guide may have the answer.

Players will face waves of SIVA-enhanced enemies for five minutes, followed by a Boss. The event unlocks along with the Plaguelands patrol once you've completed the Rise of Iron story.

While Bungie has said it's the quickest way to level up, it's not as straightforward as its Taken King counterpart - the Court of Oryx - so let's jump right in.

You can find the entrance to the forge in Archon's Keep. There's a Fallen console near the entrance that you can use to make a SIVA offering to start the event.

There are three difficulty levels:

It's important to note the differences in general gameplay between Archon's Forge and the Court of Oryx, as you can't just wander in and out of the arena willy nilly while the event is going down.

Firstly, if you're defeated during the event, you'll respawn outside next to the Fallen console unless you're resurrected. If there are no other players still active inside when you're defeated, the Public Event will fail.

You can gain entry to an active event by using a Splicer Key at the Fallen console.

SIVA offerings are the tokens you need to start the event, similar to the runes for the Court of Oryx. You'll need Splicer Keys to join already-active events.

You can only hold one SIVA offering in each of your character's inventories at a time, and one in your vault. If you see one drop, be sure to grab it as it won't transfer over to the Postmaster later.

SIVA offerings can still drop even if you're already holding one, so it's worth using an app to manage your inventory and free up space. [Update:] SIVA Offerings have been temporarily excluded from the gear manager API due to a duplication exploit. Here's hoping Bungie resolves it quickly.

Be sure to enter Archon's Forge pretty sharpish once you've use your SIVA Offering. Some players have reported that dilly-dallying resulted in getting locked out of the arena and having to use a Splicer Key to gain entry. There's only about a two second window - drop the SIVA Offering and jump in immediately.

If you're defeated in Archon's Forge, you'll respawn at the Fallen Console and as long as there are players still active inside, you can use the Splicer Key at the console to get back in.

Splicer Keys are random drops obtained by killing Splicers in Plaguelands patrol. You can also farm Splicer Keys if you need them in a hurry.

You can hold up to ten Splicer Keys at a time per character and ten in the vault. As with the SIVA Offerings, if you leave them uncollected on the ground, they won't appear at the Postmaster.

There are three main phases and a boss phase in a typical Archon's Forge encounter.

Phase 1 is pretty straightforward - kill the baddies. Phase 2 triggers when you're about half way through; you'll know when it kicks off because Ghost will highlight incoming reinforcements. Again, just kill the baddies.

In Phase 3, Ghost will warn you that the enemies are planning something. Search the domes scattered around the arena to spot one opening, revealing a SIVA cluster you need to destroy. a Phase 3 won't trigger if you're chopping through enemies too quickly, so you might not need to do this. If you destroy the SIVA cluster you'll spawn three flaming axes, but you should save them for the boss.

When Ghost makes a comment about having nearly finished the event, it's time to grab the axes, or otherwise prepare Heavy weapons and supers. If every player climbs to the top of the central dome, they can jump through the crack as soon as it opens far enough to perform strong (right trigger) axe attacks, which will absolutely wallop the boss. You should be able to pick it off rapidly with Heavy, supers and snipers after this start.

All players that participate in the Archon's Forge Public Event will have their rewards pop up directly in their loot stream - so you don't have to be the one to throw down a SIVA Offering to get the goods, or even get damage on the boss.

Rewards include Legendary gear exclusive to the Archon's Forge Public Event and Legendary or Rare Engrams. Enemies killed in the event can also drop Engrams as usual. Some players have reported receiving Legendary equipment after dismantling Uncommon and Rare (green and blue) Engrams obtained through Archon's Forge.

Bungie has said Archon's Forge is a primary means of advancing your Light level, and it certainly seems rewarding. Between loot rewards and random drops, the Engram drop rate is high enough that you may find your inventory and even Postmaster will fill if you aren't rapidly dismantling spare gear for parts or infusion. Remember the Postmaster collects Uncommon gear now, so you have less space to work with.

Bungie has said that the quality of the rewards isn't tied to difficulty levels so don't ramp up it up thinking you'll get something extra fancy.

One of the biggest problems with Archon's Forge is that so often you turn up and there's nobody else there, which makes defeating the bosses pretty damn difficult.

Rather than turning to LFG or waiting for someone to arrive, you can stack the deck in your favour by giving Destiny's matchmaking servers time to find you a populated instance with a good connection.

To do this, travel to the entrance to Archon's Forge in Archon's Keep and then get off your Sparrow. Walk very slowly through over the steps and along the corridors until you cross the Archon's Keep threshold and get the onscreen prompt indicating you're in the instance; crouching will slow you down considerably if you need a manual restraint.

If there's nobody inside, exit the instance and run around Archon's Keep for a couple of minutes, then walk slowly in again. Rinse and repeat till you luck out; it shouldn't take long.