If you're ready to take on the big new Royal Pools challenge in the Destiny 2 Leviathan Raid, you're going to want to be prepared.

We've covered the Leviathan Raid in some depth before as part of our extensive Destiny 2 guide. We've shown you how to complete the Raid and the best way to collect all nine secret chests, but now that Challenge Mode has arrived, we're faced with the first uptick in difficulty since Prestige mode.

Challenge mode is now live. Discover the new way you will be challenged in the Royal Pools encounter. pic.twitter.com/Qhz5syOYwI

The first Leviathan Raid Challenge can be encountered in the Royal Pools, and will require some real skill and teamwork to get through. Luckily, Arekkz has all the best advice for overcoming the challenges ahead.

This Challenge is tied to the Royal Pools, which is the first major encounter in the Raid. This means that if you just want to try the Challenge, but not tackle the full Raid right now, it's easy enough to dip in and then leave again.

As covered in our Raid advice, this room requires players to stand on four pressure plates around the outside of the arena. There's a plate in the centre too, and players need to collect the Psionic Protection buff from here to really stand a chance in this encounter. For this Challenge, though, one player must always stay in this central area.

They need to either stay on the plate or in the water surrounding it. If they go outside the water - or even jump, leaving the ground - the challenge is failed. This means that you need to nominate the most reliable and heavily armoured member of your team for this position - get a good Titan in there, we'd say. They'll need to be careful with Psions, which can, of course, lift you up.

The best way to do this, Arekkz says, is to nominate one player for the center, another as the 'runner', and then assign the other four players to the four pressure plates. It's important that each person knows exactly what their role is. The person in the center needs to stay put, while the runner's job is to dash between different pressure plates and hold them while the players on them travel to the middle to recharge their buff. 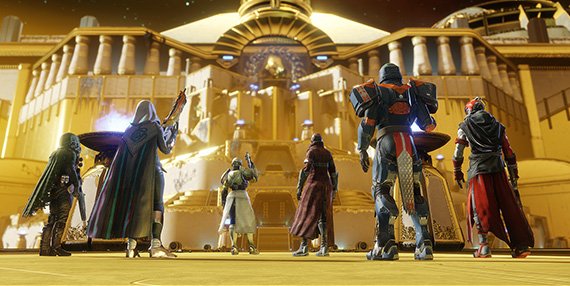 Every time the runner leaves to go to the next plate, they should pass through the middle to recharge their buff as well. Ultimately, the runner won't be able to pull off a perfect version of this plan - every now and then a player will need to leave their plate before the runner gets there, or the runner may want to leave a plate 10 seconds early if they know the player is on their way back. It's all about good communication.

The person in the middle basically needs to look after themselves as best they can, fending off enemies while trusting in their team mates to handle the pressure plates. Luckily, they're always right next to where the buff spawns.

This will take longer than the Royal Pools usually would, but if you work together, and the runner does their job effectively, then this shouldn't be too much harder than it usually is. Basically players on the plates should prioritise always having a buff, and the runner's job is to make the process of them going to collect it as painless as possible.

Once the plates are all locked in place, all players should rush into the middle to attack the canisters together - if you can get this done fast and do all the canisters in one phase it'll all be over much faster. The players who aren't forced to stand in the middle should prioritise the Psions, too, lest your central player get lifted.

This may take a few attempts and some practice, but if you follow this guide and work together well you should be able to crack it. You'll get your usual chest for completing the Royal Pools, but after that there will be a second Challenge Mode chest, with the Emblem and some gear. And then congratulate the rest of your team, of course, because you couldn't have done this without them.