Following the deleted post from earlier in the week, Bungie has now re-confirmed the date for Destiny 2's big reveal.

Update: It is now official! Bungie has confirmed that we are indeed going to learn more about the next chapter of Destiny 2 on Tuesday, June 9 at 9am PT, 12pm ET, 5pm BST.

There's now a dedicated landing page for the stream on Bungie's website. The show itself will likely be available on Twitch and YouTube.

This is the exact time and date revealed in the deleted, and since reposted, teaser that went live on Tuesday, so there's no surprise there. Interestingly, however, Bungie did not use the same video to tease the event. Instead of Eris, the official teaser shows The Drifter also heading to Europa, likely one of several NPCs who are going to be joining Eris on the snowy moon.

Fan believe Europa will be humanity's first point of contact with the mysterious new race. Tuesday also happens to be the start of the final season in Year 3, so we're likely going to learn more about that during the stream.

Something calls. It's time to answer.

Original story: Overnight, the official Instagram account for Destiny 2 posted a teaser video that ended with the confirmation of the time and date of when the game's next big content will be revealed.

Destiny expansions typically drop in the summer, and this next one will be unveiled on Tuesday, June 9 at 9am PT, 12pm ET, 5pm BST.

The post was deleted off the page fairly quickly, but a functioning link still exists. The teaser itself had character Eris Morn, the star of Shadowkeep and other Destiny expansions, struggling to climb a mountain covered in thick snow. 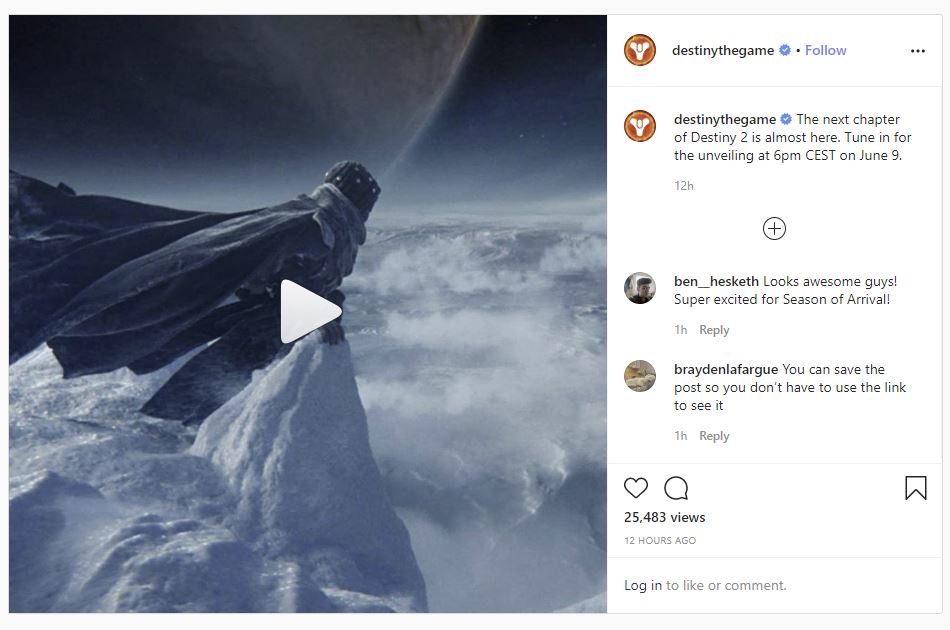 Fans believe Eris is on Europa, the Jupiter moon, which could be the first front in the fight against the rumoured new race.

It's not immediately clear why the post was deleted. Assuming no errors in the information, the other likely reason is that the developer didn't want to start talking about new content in the midst of the US' current social crisis. The protests against racism have already garnered responses from a number of gaming brands, and caused Sony's big PS5 event this week to be delayed.

In any case, the June 9 date is in line with Bungie's statement from Friday, which suggested the wait for new Year 4 information will be short.