The Season of Dawn has begun and you'll be facing off against some challenging enemies in the new six-player activity, the Sundial.

After defeating The Undying Mind in several different realities, it's time to face a new challenge thanks to Osiris' new toy. The Sundial activity sends you to a different time and place at the beginning of each event, but the mechanics are similar to those we've seen during the Menagerie where you'll face a range of different enemy and level types, culminating in a boss battle.

There are a few steps you'll need to go through before you can reach the Sundial, so let's take a look at what you'll be doing. 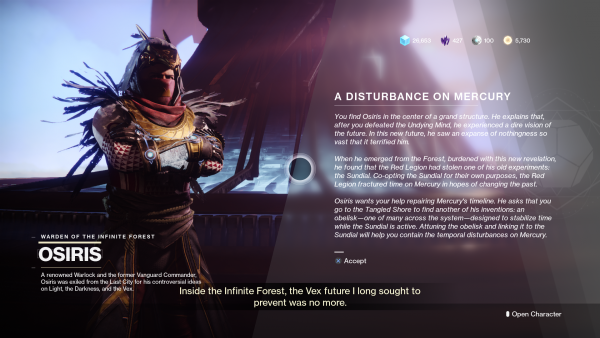 How to complete A Matter of Time and unlock the Sundial

Before you can tackle the Sundial, you'll first need to speak with Ikora to pick up the quest A Matter of Time, where she'll ask you to visit Osiris. He's at a new location on Mercury, the Sundial Spire. He then tasks you with finding an Obelisk, which you'll need to get rewards from The Sundial. The first Obelisk can be found on the Tangled Shore but when you arrive you won't be able to interact with it.

You need to head over to Sorik's Cut on the Tangled Shore and collect 50 Sundial components from Cabal enemies. They'll drop between one and three at a time, so it shouldn't take you very long. Next, you'll have to bank those items, before you're tasked with filling your progress bar up to 100% by getting Super kills, ability kills and collecting Orbs of Light. If you tackle a public event on the Tangled Shore this step won't take you long at all. 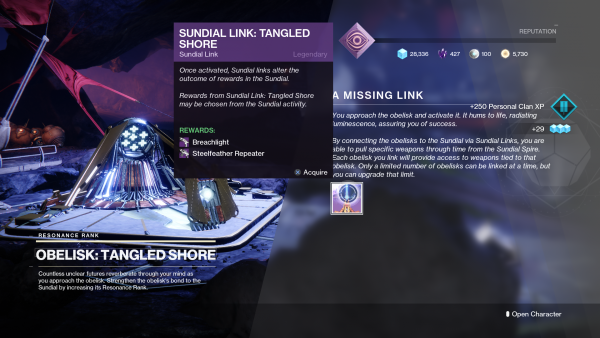 You can then interact with the Obelisk and see that it offers up two rewards for completing Sundial runs: the Breachlight sidearm and Steelfeather Repeater auto rifle. You can also upgrade the Obelisk's Resonance Rank by completing various bounties, such as getting 90 Grenade Launcher kills. You'll only be able to link a limited number of Obelisks at a time but you'll be able to increase that number as the season continues.

Head back to Osiris for a chat. Once you've done this, open up the Director and select Mercury, where you'll see a new activity near his location and you can finally enter the Sundial. There are several stages you need to complete, starting with the Ascent. You'll need to deal with waves of enemies while fighting against Cabal Champions, as well as taking on challenging new minibosses. More bosses will be added as the season progresses and you can read more about what to expect in the not-too-distant future here. 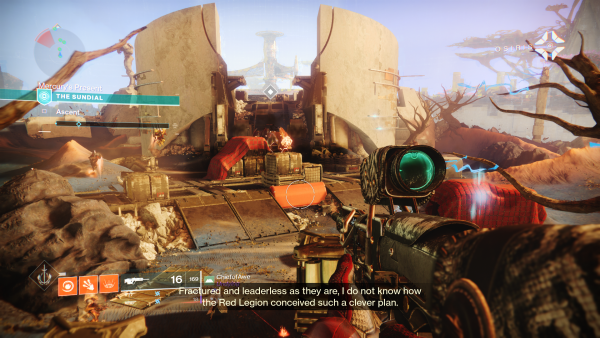 You'll find that Charges drop from more powerful enemies that you can lob at groups of Cabal or deposit, depending on what stage you're at. Eventually, you'll face your first Sundial boss, Niruul, The Hollow Voice. Watch out for Void Prisons here as they can trap and kill you - just remember to shoot your way out.

It would be a good idea to bring some decent crowd control weapons like Riskrunner and a powerful Grenade or Rocket Launcher. The recommended Power level is 850 so it shouldn't be too much of a challenge, but you can get overwhelmed pretty easily. You can use matchmaking or enter with a pre-made Fireteam, as well as choose the difficulty you'd like to play at. For harder difficulties, you'll only be able to play with a pre-made team, so grab your buds and jump in. 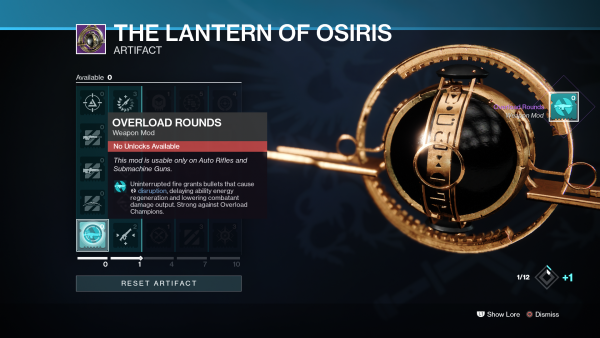 Afterwards, you'll have a choice between the two aforementioned weapons and you'll receive this season's artifact, The Lantern of Osiris. Season pass holders will also be able to unlock the Exotic Scout Rifle, Symmetry, right away.

You'll be able to equip new Season of Dawn Seasonal Artifact mods that will boost your strength and provide you with buffs against certain enemy times, much like the Barrier and Overload mods from Season of the Undying. Once you've done that, you can take on new quests from Osiris such as Recovering the Past, which we'll have a guide for soon.