Bungie has updated the Destiny 2 development roadmap with some features being moved from one month to the next.

A few items, such as Nightfall Strike Unique Weapons have been moved to later Destiny 2 releases.

Previously, these unique rewards were slated for release next week with Destiny update 1.1.3. Bungie said it really wanted to get these in players hands next week alongside Nightfall Scoring, it's "more important that each of those rewards live up to the difficulty it will take to earn them."

Plus, they have to be "super cool," so the studio is giving the artists more time to work on the aesthetics.

Bungie said Mod System Improvements are also still planned, but will not be available in May when 1.2.0 is released. More details on these improvements and when to expect them will be announced at a later date.

Another change is the addition of Rumble being added to the new rotating weekly Crucible playlist in 1.1.4 coming on March 27. It will be joining 6v6 Iron Banner and Mayhem.

"We want to make sure players have a more diverse set of game modes available in both Crucible and Private Matches," said game director Christopher Barrett.

Doubles is also planned to return, but a release date isn't known just yet. Next week, Bungie will go into further detail on its future Crucible plans. 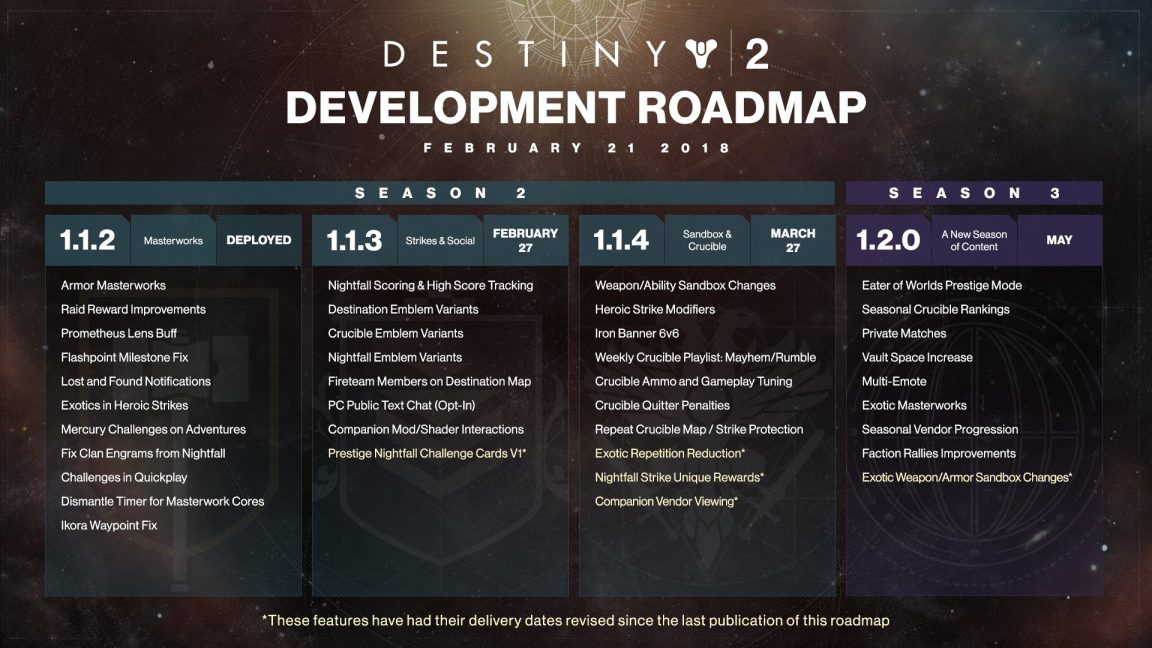 Along with the aforementioned, here are some of the other features which have been moved around from the previous Destiny 2 roadmap.

Exotic Repetition Reduction and Companion Vendor Viewing have been moved to update 1.1.4 alongside Nightfall Strike Unique Rewards. Expect the update to arrive on March 27.

Changes to Exotic Weapons/Sandbox changes also moved to the May 1.2.0 update. The latest roadmap is shown in the image above.