Destiny 2 opens with a bang, and then some. Welcome back, Guardian.

This walkthrough should ease you in to Destiny 2 is you're a newcomer to the series, but our Destiny 2 guide is where all the goodies are; hit it up for more info,

The Homecoming mission is a quick reintroduction to the cast and hub of the original Destiny, but things have changed dramatically. The Cabal, specifically Ghaul and his Red Legion, have decimated your old safe space on Earth, The Tower, leaving it burning and battered.

If you're new to Destiny or you want to try out a different class, this is a cool little mission to practise and get familiar with the Titan, Warlock and Hunter builds, and if you're on PC it's a great chance to work out your key bindings if you don't enjoy the default PC controls.

It can be worth playing through this first mission then logging out and trying it again with a new class, to get a feel for each of the three, before committing to which you'll play through the game with. Right now you'll be using the second of the three subclasses you'll eventually unlock as you play the full game, but shortly you'll be switching to the new subclass introduced with Destiny 2 appropriate to your class.

Anyway, once the first cutscenes have finished, make your way through the burning corridors and pick off the small number of Cabal here. There are only a few and only one way to go. You'll meet Cayde-6 briefly too. 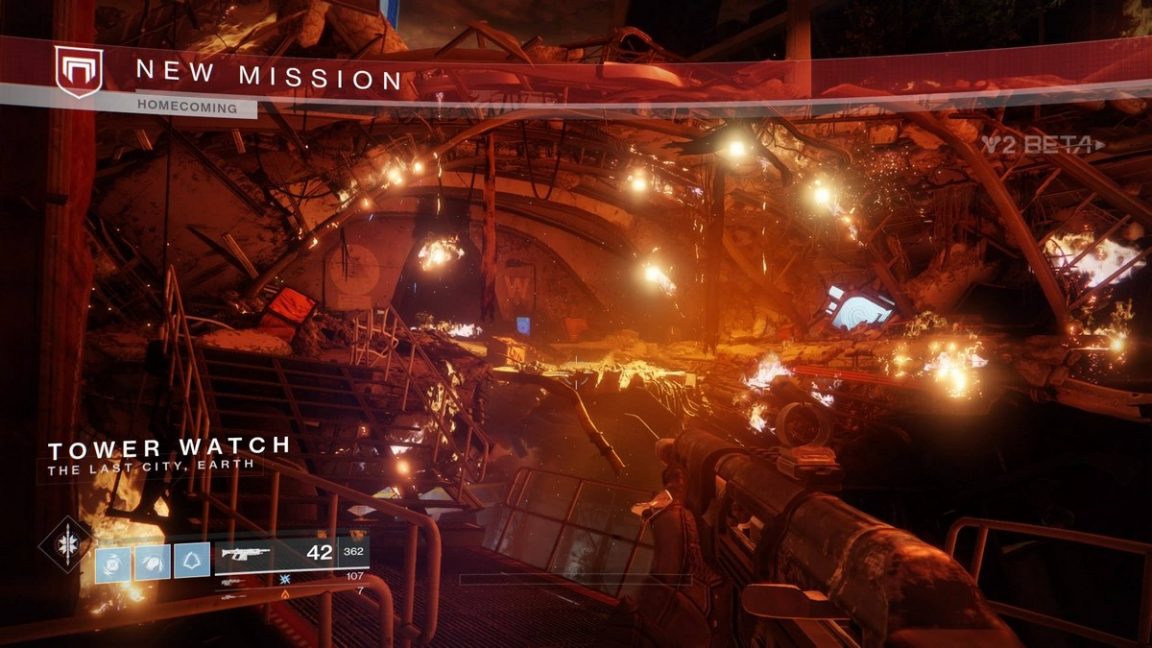 Follow the corridors in to the hanger and you'll come up against your first Centurions and Phalanxes. Phalanxes have physical and are tougher than the regular Legionary. Aim around the shield or, when they have extended it, shoot the exact centre to break it. Centurions have energy shields, so shoot them with an energy weapon for extra damage. Once taken care of, head up through the burning debris and when you arrive at the Tower Plaza, clear out the enemies landing in drop pods and then meet with Commander Zavala, Titan Vanguard. 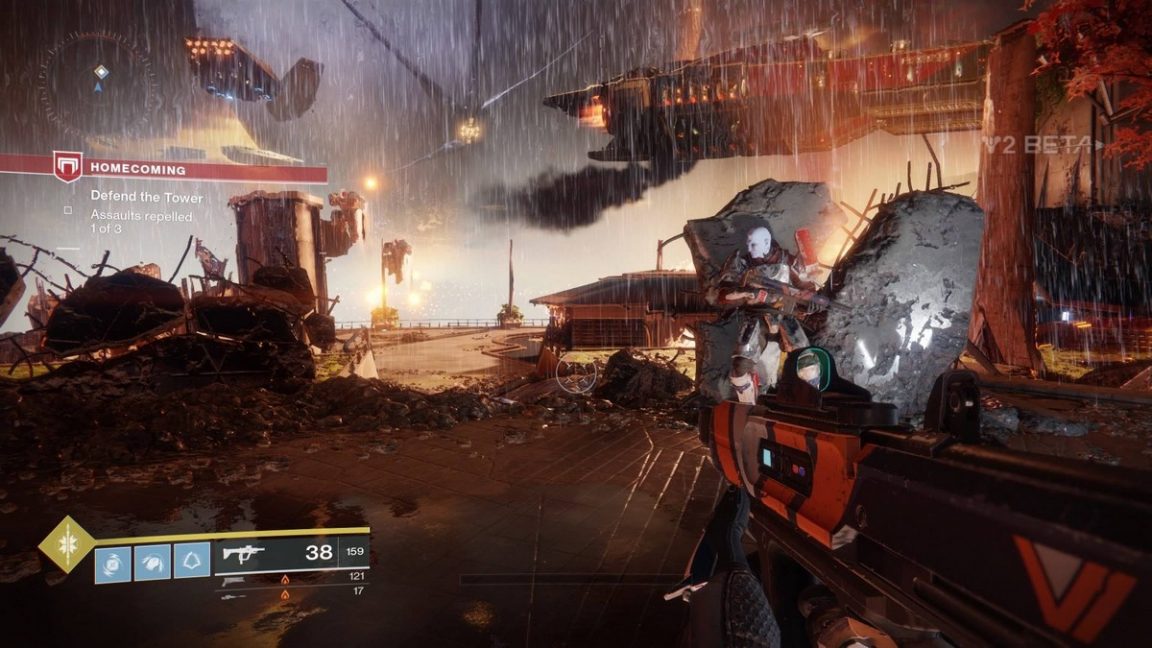 You'll now have to face off against three waves of Cabal as your first proper challenge. This is easy enough, but just remember when you hear Zavala's warning make sure you regroup with him to take advantage of his shield. Ride out the incoming barrage of explosives in his shield and then finish off three assault waves as they come at you. This is an excellent time to try out your melee attack and your Super. Revive Zavala if necessary - along with any randos who join your game in this public area. Don't worry, you're not stuck with them.

Ikora will now instruct you to go find The Speaker while Zavala remains to defend the plaza. You can hang around here if you like and pick off small handfuls of Cabal if you feel like you need a little more practise or want to clear up a little more ammo.

Head over to the steps that lead down to Tower North. If you're disorientated, from Zavala's position head forward to the right, and down the steps into the Tower North. Go past the maintenance robot sweeping up and you'll then arrive in The Speaker's chamber.

As soon as you arrive you'll see Ikora Rey, Warlock Vanguard, who annihilates the Cabal threat - so don't waste any ammo. Take out a couple of drop pods and Zavala will tell you to board the Command Ship. 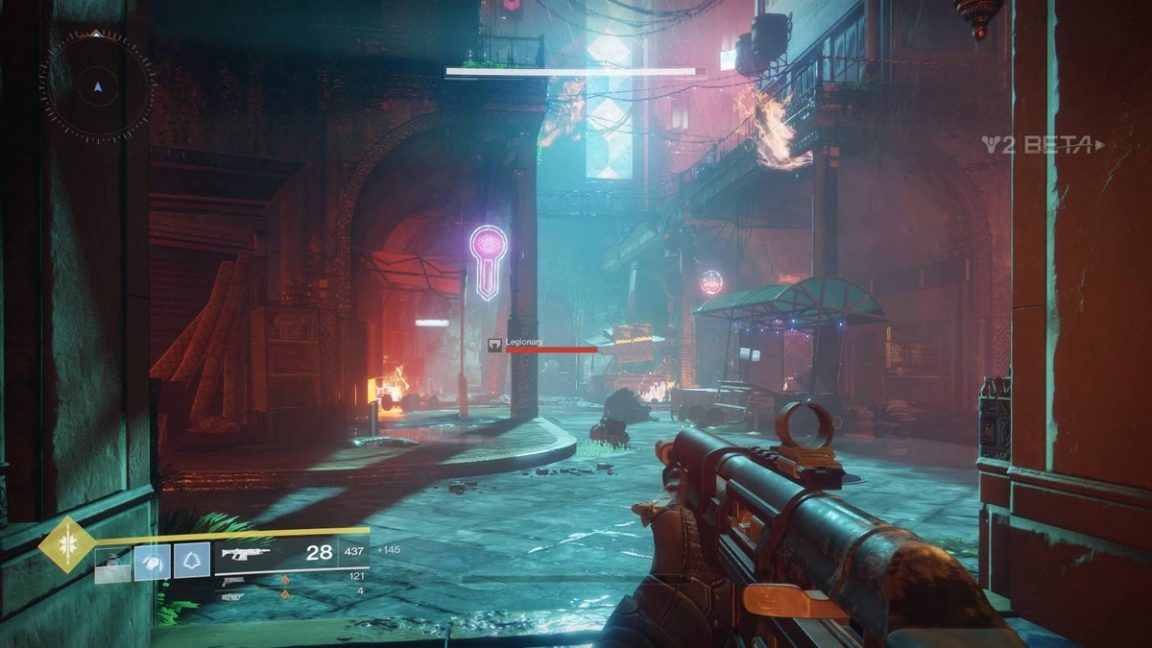 Burst through the double doors here and you're now in a completely new part of the Tower map. Work through the market taking down the Cabal as you go. You'll come across Cabal Incendior troops here. Aim for the fuel canisters on their backs and they'll go down quicker - and damage any enemies nearby as a bonus. In the next courtyard Amanda Holliday arrives with a lift to the Command Ship, after a fight with an Honoured Centurion and a few of his buddies.

Once Holliday drops you off admire how pretty your view into space looks and then make your way up the two ramps. Take out the Cabal here and have your ghost download the schematics. You now need to find the Shield Generators.

Follow the corridor taking out Cabal until you come face-to-face with Pashk, The Searing Will. He's not that hard to take out, but use the pillars here for cover and drop his shields with your energy weapon to make short work of it. 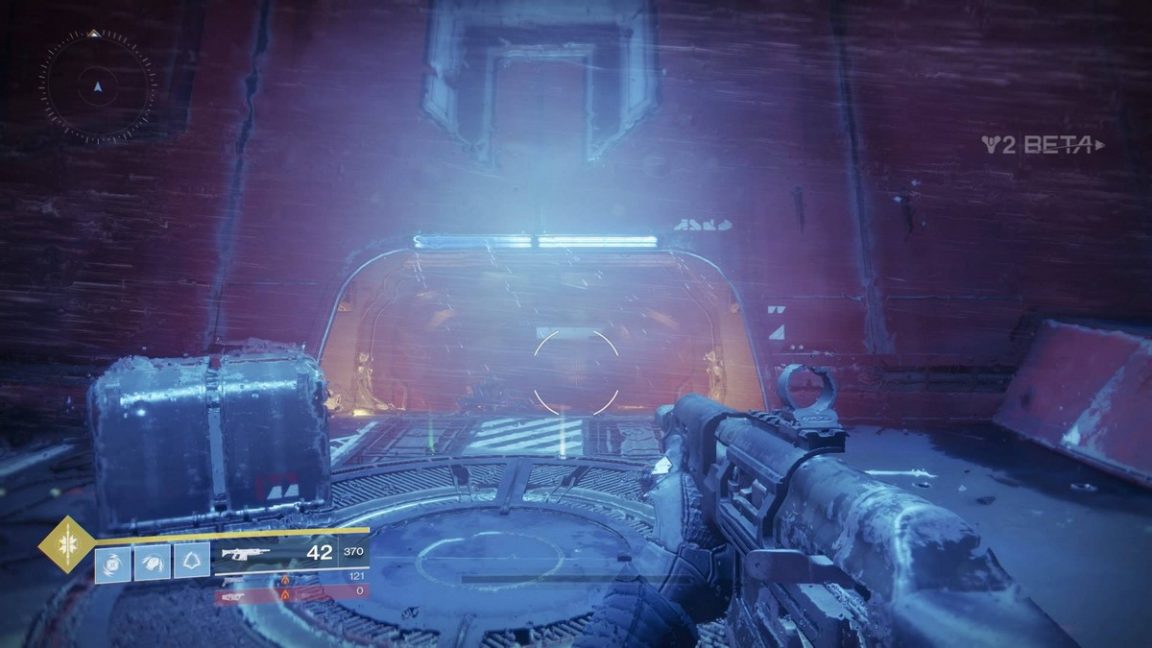 At the top of the ramps you'll find yourself fighting outside on the ship's hull, facing Cabal Gladiators and Psion, as well as their leader Brann, The Unbent Blade. Use all the space here to keep moving and stay away from him while picking off his adds. He has three distinct bars of health so it's easy to keep track of the damage you're doing against him. Hit him with your energy weapon to drop his shields, then switch to kinetic for headshots. It's easy to avoid his fire if you shelter in one of the nearby towers.

Through the next set of doors you'll have to fight a bunch of different enemies in a tiered hanger. Do it logically by taking out the enemies at the top first and working your way down, but be careful not to fall down the middle and out into space. Again, hitting the Incendior troops will damage those pesky sniping Psions. 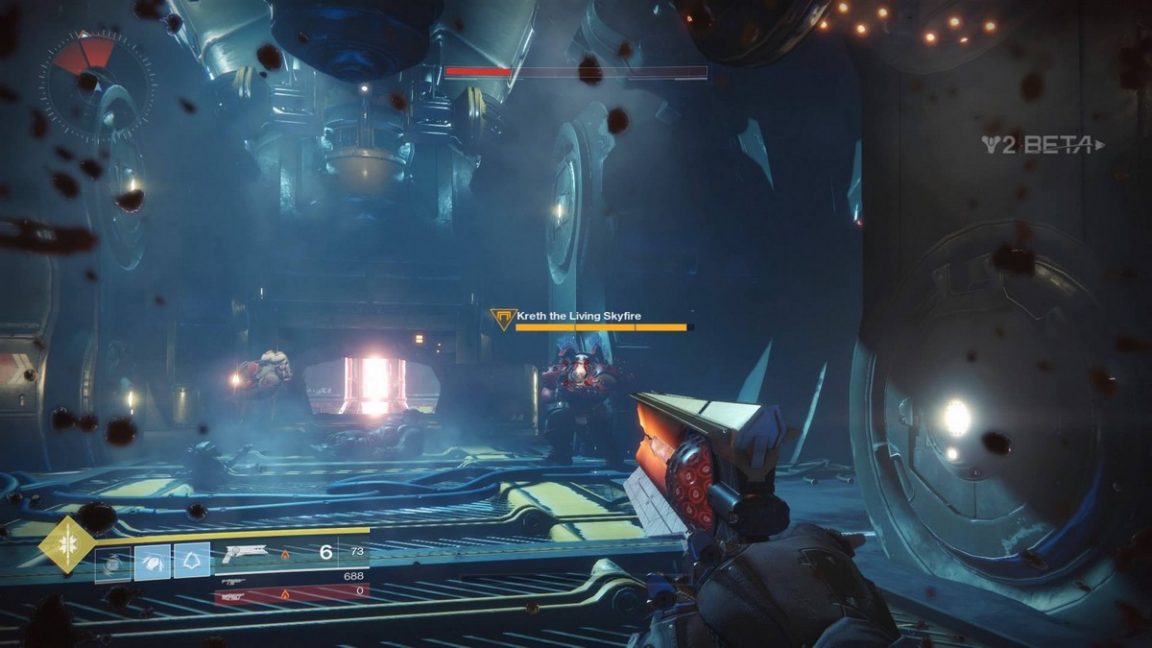 Once cleared, carefully glide down to the platform below and head into the next corridor where you'll face Kreth, The Living Skyfire. Aim for his head and you should take care of him easily enough. Now move into the shield generator room. 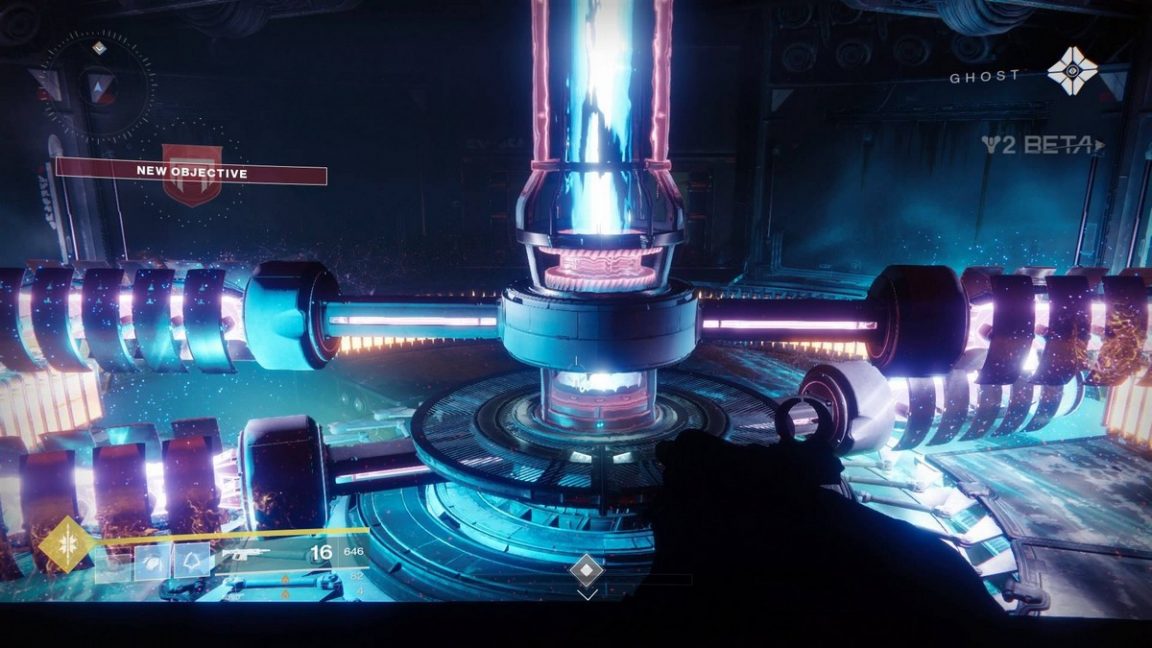 Here you need to take apart the shield generator by destroying three exhaust turbines. You don't need to waste ammo on anything other than the exhaust turbines, so just drop down to the floor below the rotating arm. It's slow enough that you can sprint along behind it as you move between the three pits, which are safe areas where you can unload onto the turbines. The rotating arm will kill you if you get hit, but after the three turbines break it slows, then stops, and can then be safely touched. 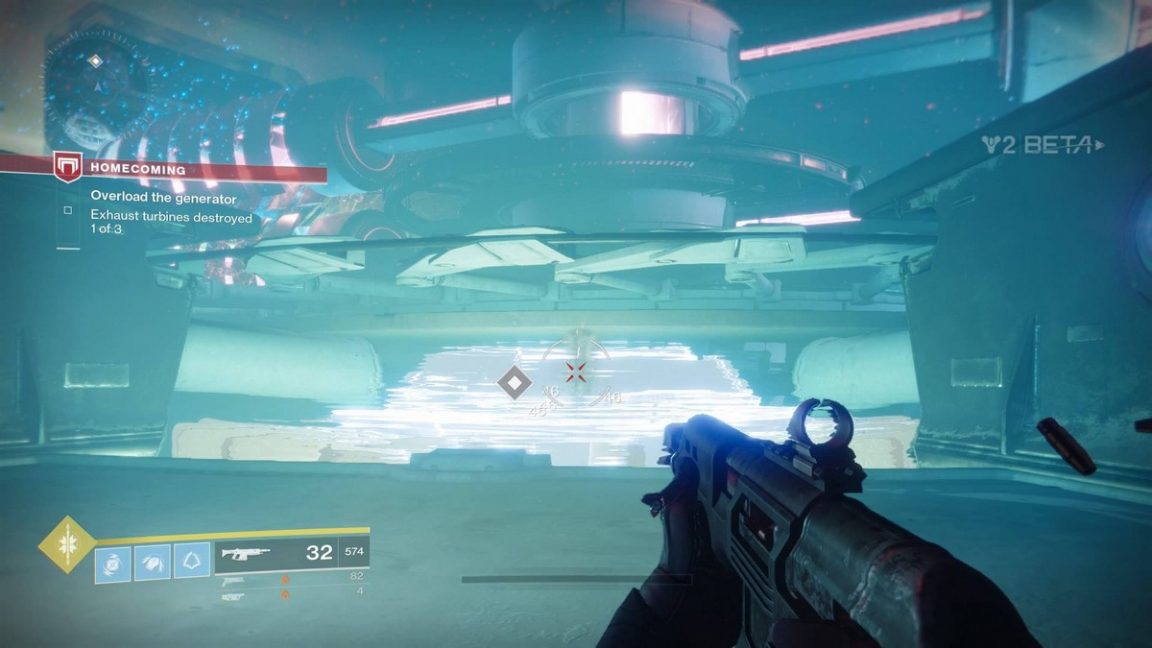 With that taken care of you need to get off the Command Ship. Race to the hull through the new opening and you'll come face-to-face with Ghaul himself.