Bungie has once again updated the development roadmap for Destiny 2.

Destiny 2 update 1.1.4 will be available two weeks from now and due to issues impacting Heroic Strike Modifiers, the feature has been pushed to update 1.2.0.

Bungie said it will use the extra time to add additional variety than was in the original plan.

When update 1.1.4 releases on March 27, as previously reported, the Weekly Crucible Playlist will become available to all Destiny 2 players.

At launch, the playlist will contain Rumble, Mayhem, and 6v6 Iron Banner. Things kick off next week with Rumble. 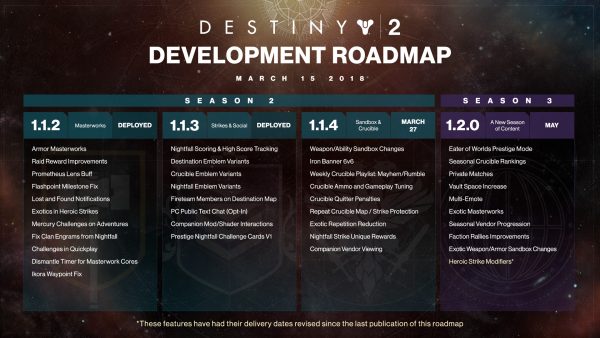 The game modes will rotate out weekly through May 1. The schedule is below.

Until the next update arrives, players can busy themselves next week with the final Destiny 2 Faction Rally event for Season 2. Hopefully, Future War Cult will win this time out.

Faction Rallies will return at some point during Season 3.