The latest season in Destiny 2 has brought a slew of fresh content: including the Aspect of Influence quest line. One of the major new additions shows that we are getting accustomed to our darkness power by giving us a new Stasis aspect to play with. But what are they and how do you get them? We got you covered.

Upon completing the Aspect of Influence series of quests, Hunters will unlock the Grim Harvest. While Titans add Howl of the Storm to their arsenal, and Warlocks acquire the Bleak Watcher.

To start there are a couple of prerequisites. First, you have to have beaten the Beyond Light campaign. Also, you will need to have access to the Salvation's Grip grenade launcher. You also need to have done the previous Stasis aspects. Hopefully, you got those done last season and are ready to go now.

How to complete the Aspect of Influence quest in Destiny 2

Your journey starts with a trip to the Exo Stranger on Europa. She will have a new quest for you and a nice bit of lore about getting stronger and new opportunities. Essentially, you are going to have to craft a Skeleton Key. 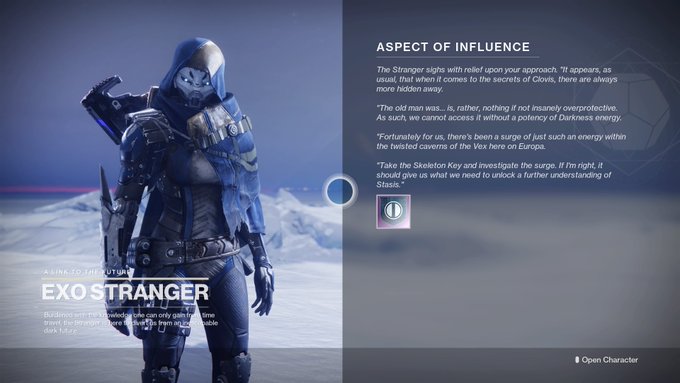 The first objective in the Aspect of Influence quest will direct you to the Well of Infinitude. That is where the Glassway Strike begins, so drop into Charon's Crossing on Europa, then head over to the Asterion Abyss. Your minimap should have a quest marker, so track that. It will make your life easier.

Here you will see an Entropic Shard above you with a quest marker. Shoot it with the Salvation's Grip grenade launcher. This will spawn more enemies and more Entropic Shards which you need to follow and shoot as they appear.

Keep pushing through and freezing all of the shards with your grenade launcher.

You'll enter some rooms where you have to fight a bunch of Vex, but once you've killed enough and defeated the boss, your Skeleton Key will be ready and you will have a new quest objective: complete the Heroic Exo challenge over by Bray Exoscience on the left-hand side of the map on Europa. 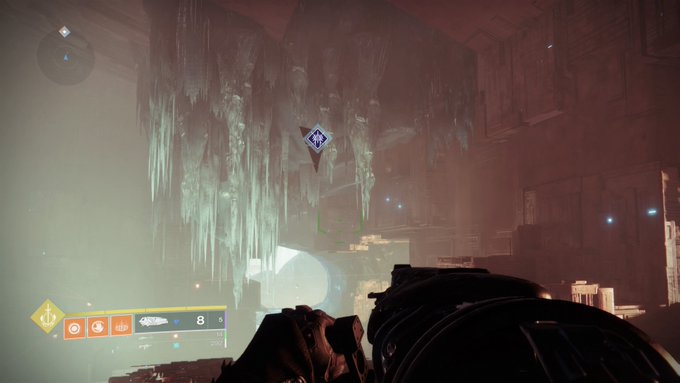 You're now headed to an Exo Challenge, except this one is Heroic. For this, it's advised to go in with a whole fireteam as these are hard. It's likely these will change each week but are significantly harder than last season.

The challenge of the week of writing is the Simulation: Safeguard.

The job is to keep Vex off of the platforms in the middle. This used to be easy, but you'll have a much harder time now as you get overwhelmed by Wyverns and Overload Champions. As you go, they will begin to spawn from both sides too. Again, we highly advise bringing a couple of friends for this. 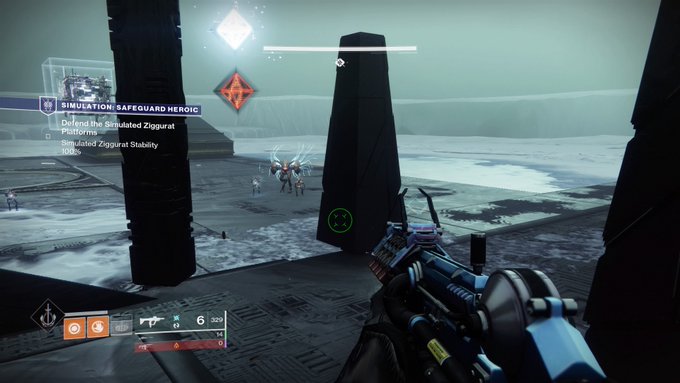 Collecting Grim Harvest, Howl of the Storm, and Bleak Watcher

After that, to collect the Aspect of Influence, you're taking your empowered Skeleton Key to the Ziggurat back at the Beyond location.

Fast travel there and then commune with the Darkness. You'll be teleported into the pyramid where you have to go talk to the freaky Darkness statue. However, it will yield rewards as you are now the proud owner of a new Stasis aspect.

If you are a Warlock, this will be the Bleak Watcher. It will allow you to convert your grenade into a stationary Stasis turret that will freeze enemies for you.

Hunters, you get Grim Harvest. This means that when you kill slowed or frozen targets, you create Stasis shards. These can be picked up by you and your team to grant melee energy.

If you're a big chunky Titan though, you get Howl of the Storm. This means that when you have a melee ability ready and you slide, you will create a line of Stasis, not unlike a glacier grenade. Enjoy!

For more what's new in the Season of the Chosen, here's everything you need to know about Battlegrounds and the Hammer of Proving.

We also have a page on how to open Tribute Chests in Destiny 2, here.