Deathloop – Arkane Studios’ new project about an assassin in a time loop – promises an action-packed adventure of creative kills and thrills. Colt wakes up every day from the same spot on Blackreef Island, whether it’s the end of the day or the end of his life. He and the eight Visionaries seem to be the only ones who realize that the island is in Groundhog Day mode.

To break out of the loop, Colt has to kill the Visionaries -- a plan that they don’t seem to approve of. The Visionaries order islanders to kill Colt on sight. Julianna, a rival assassin and the strongest Visionary, also appears to hunt Colt down during every loop. The plan? Kill eight people before the end of one loop. As the game’s slogan goes: “If you fail, then die, die again.”

Here’s what you need to know about Deathloop.

Deathloop is set to release on 14th September 2021 for the PlayStation 5 and PC. It’s been highlighted as console-exclusive to the PlayStation 5, even though Microsoft now owns Bethesda and Arkane Studios. Deathloop director Dinga Bakaba claims that joining the Xbox Game Pass family allows them to stay “creative,” even for PS5 projects.

Originally, the game was supposed to release on 21st May 21 2021, but then the developers pushed the date back to avoid crunch. “We’ll be using this extra time to accomplish our goal: create a fun, stylish, mind-bending player experience,” read the post from the Deathloop Twitter. Many can’t help but be more forgiving about the longer wait after Cyberpunk 2077’s botched launch.

All Deathloop pre-orders come with bonuses. Even if you just get the standard edition, you should get:

At this time of writing, Deathloop pre-orders are still available for the standard and deluxe editions. Click these links for the full list of pre-order listings for both. 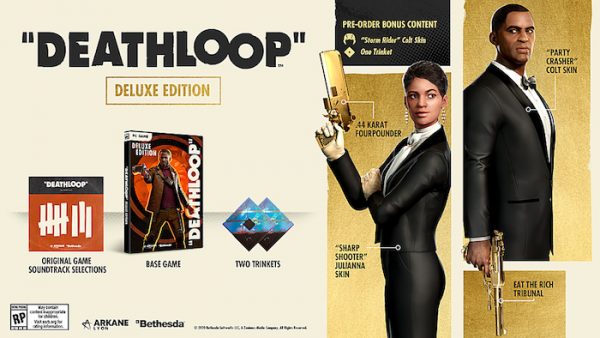 The Deathloop Deluxe Edition offers these goodies in addition to the base game and pre-order bonuses:

In addition, Best Buy and Game have an exclusive steelbook that comes with both the Deluxe and Standard Editions of the game. If you’re all about swag and steelbooks, you don’t want to miss an additional goodie!

Deathloop Deluxe Edition in the US:

Deathloop Deluxe Edition in the UK:

Like the Deluxe Edition, you can also get the exclusive steelbook at Best Buy in the US or Game in the UK. Also, it’s important to know that in the UK, the PC version of Deathloop is £10 less at Game than over editions, but there is no steelbook included. 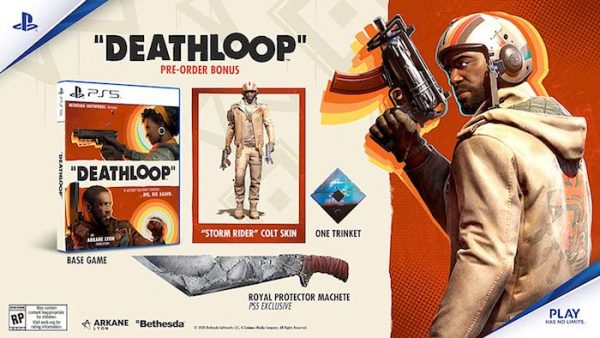 Deathloop Standard Edition in the US:

Deathloop Standard Edition in the UK:

Alternatively, for other retailers, you can just check our Deathloop pre-order guide in its entirety.

Players must kill eight visionaries in order to stop the time loop. Somewhere in the middle of the game, Julianna will appear to try and kill you. She also frequently pops up in comms to taunt Colt during the game.

The loop, while similar to roguelikes, lets Colt keep the weapons and abilities he unlocks throughout the game. Similar to how he retains all memories, he retains all this progress. However, players won’t be able to equip all these upgrades at once, so they have to choose wisely for certain points of the game.

Deathloop showcased a 9-minute gameplay segment showing off how one might choose to go about killing Aleksis, one of the eight visionaries. In the video, players can glimpse what seems to be knives and a variety of guns, including a pistol and sniper. An exclusive video from Game Informer shows a knife, the Tribunal pistol, the Strelak 50-50 assault rifle, a PT-6 Spiker, and the Fourpounder hand cannon. More unconventional equipment like a teleportation device and a hacking device also appear in the footage.

Players need to take into account context clues when killing targets. Apparently, there won’t be any notification for when one of the visionaries appears in view, so keep your eyes peeled and pay attention to what they say and do. When Colt assassinates a visionary, a symbol pops up on the screen to let him know that he successfully offed the target.

Deathloop is a mix of many things. Some fans are convinced that it's connected to Dishonored, one of Arcane Studios’ other works, because of the many gameplay similarities. Deathloop director Dinga Bakaba calls out inspirations like Dishonored, Persona, and even Cluedo when describing different parts of the game’s design.