G3 Studios' Deathfire: Ruins of Nethermore is an classic first person dungeoneering RPG in the vein of Wizardry or the Legend of Grimrock on Kickstarter. For what it's worth, it looks alright and smartly targets an audience whose "heart sings" for the games of yore. However it's also the latest in a troubling Kickstarter trend: over half of this new IP's Kickstarter page is dedicated to backer rewards and merch. It has 30 different tiers to back the game with.

Now this might be an unfair criticism that only I feel and clearly isn't a knock against the wonderfully titled Deathfire: Ruins of Nethermore. Looking over the Kickstarter page I can't see any unusual lack in quality from their pre-alpha assets and the team's hearts seem in the right place.

But what is up with this focus on merchandise? It smacks of desperation on the teams behalf, a lack of faith in their game to sell itself. Like a blog that obscures all of its content beneath gratuitous SEO. There are 30 basic tiers for this Kickstarter, along with dozens of optional add-ons you can customise every tier with. It just comes off as tacky.

Who do they think is going to go so deep into their merchandise? Where do they think this demand is coming from? This isn't an update to Planescape, this isn't a bunch of fans given the option to buy one last set of trinkets for a game they grew up with. This is a new property which only exists in pre-alpha. Why should anyone care that much yet?

This might sound crazy, but perhaps your Kickstarter's page shouldn't be 60% tier-descriptions. How about you have a few paragraphs describing the game behind it, a couple explaining who's making it and maybe a couple more show off any backer rewards that are so different they require a little bit of explanation.

Before you launch the Kickstarter, double check to make sure you've spent more time thinking about your game than your reward structure. If you have, double check your page reflects this.

Deathfire is being designed around a launch in December of 2014 and it might be worth backing. The Kickstarter page sure makes it hard to tell though. 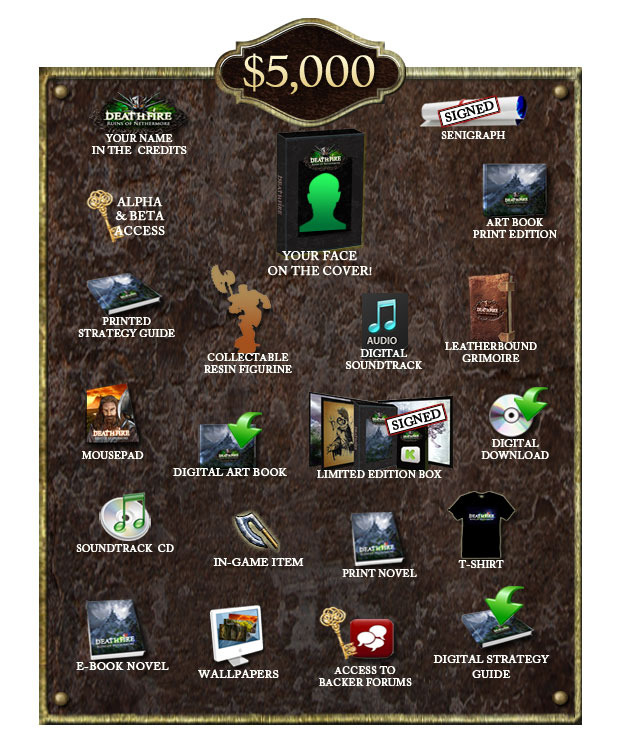