A bit of legacy code in a build which was never meant to be released has lifted the lid on gaming's undercurrent of sexism.

Techland and Deep Silver have muffed Dead Island's launch. Not only did it release in need of a significant day-one patch, somehow an unfinished version of the game was uploaded to Steam, and the patch to fix that wiped player's saves. What a disaster. It's a PR nightmare.

Then this happened: trawling through the unfinished build, one curious gamer found a line of code referring to a skill called "Feminist Whore". And things went nuclear.

Some of you may be wondering why these two words used together have caused such an outrage. You probably get called pretty terrible things when you win an online game, after all.

In short: it's complicated. Countless books and articles have been written about sexism, feminism and language, and to go in detail into why the term "feminist whore" is so problematic would take thousands of words, cover myriad other topics, and likely bore you to tears.

So throw me a bone here and accept that it is problematic, because we're already moving on. What makes the appearance of this term in a mainstream game like Dead Island so troubling - even when it was never meant to be seen by the public, even when we very generously assume it was some sort of very poor taste joke - is that it is indicative of a much broader, consequential issue plaguing the entire games industry, to whit: sexism.

So Sexist
The games industry - alongside other geek cultures like comics, in particular - is riddled with sexism. Sexism hangs off it like ticks off a dog; you might not notice it until you look, but once you do, you'll be disgusted, and you'll notice how it's starting to drain the life from its host.

There are entire sites and journals devoted to discussing the myriad ways sexism manifests, but here's just one example: female characters in games are almost universally reduced to their sexual capacities. They are sexualised, while male characters are not.

Try to name a prominent female character who isn't designed around sexual attractiveness. There's the original FemShep, who like the Resident Evil heroines, has been made over, and - from what I've seen so far - the female COGs in Gears of War. Final Fantasy XIII's Lightning wore an almost practical outfit - although she’s also thin enough to inspire a whole generation of bulimics. Left 4 Dead’s ladies are generally pretty sensible.

And that’s it. I’m out. Who else is there even.

Women in games have massive breasts. They have shining thighs. Their clothes are cut away to show flesh or unrealistically skimpy (have a look at Women Fighters in Reasonable Armor for alternatives to the chain mail bikini). They're impossibly thin. They share similar facial structure. They're almost always shown wearing make up, as if women wake up wearing it. They often sport completely impractical hair.

If you start to look at promotional artwork for games you'll begin to notice some alarming trends. Women are posed with their boobs or bottoms as the focus of attention - often, disturbingly, impossibly twisted to squeeze in both at once. Their poses often fail to show action, falling mainly into passive "come hither" territory. 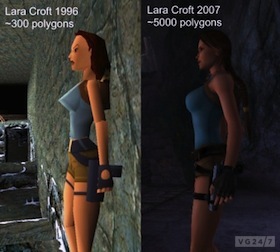 In 1996, we maybe had some excuse for this nonsense.

There are many excellent examples and explanations of how women are sexualised in games and beyond on the blog Go Make Me A Sandwich, but this examination of World of Warcraft art, part of a series, clearly demonstrates the kind of issues we're discussing.

Most of these female characters aren't just prettified - they're physically impossible. Have a look at Boobs Don't Work That Way for more precise discussion of the ridiculous depictions we often just accept as normal. Remember these artworks are produced by paid professionals, usually with formal training. They ought to know better.

If you still can't see it, you may want to check out this gallery of sexualised males and gender-swapped superheroes. If it looks strange and wrong to you, it's because you are used to seeing males and females treated in vastly different ways, and seeing them in the opposite role is confronting. 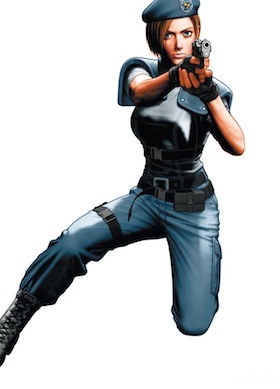 Sweeping it under the rug
Normally at this point someone is jumping up and down pointing out that men are idealised to the point of ridiculousness in gaming, too. That's often true - nobody's going to say Marcus and Dom are normal looking-human beings - but you could hardly say they're sexualised. This gallery of male characters is extremely light on broken anatomy, uncovered flesh, and grossly exaggerated sexual characteristics - although there's a lot of perfect hair.

But hey! Most gamers are heterosexual males, right? They want to see boobs and butts!

Even if it were true that most gamers are male - and it's becoming increasingly obvious that it's not - we don't want to encourage that trend. We don't want to block out half of our potential consumers and their sweet stores of cashmoney.

But more importantly, that attitude is plain insulting to the heterosexual men it claims to speak for. It reinforces the suggestion that females exist solely for the purpose of being looked at, and it reduces the viewer to a collection of impulses to do sexual things to ladies. That’s an unfair reduction of both sides.

Who to blame?
Techland and Deep Silver have reacted with horror to the discovery of the "Feminist Whore" skill, declaiming knowledge, and giving all signs of setting up a witchhunt for the culprit. I don't think that's really fair, any more than it's fair to blame individual men for the existence of sexism. That such a "joke" would be made in a professional context shows that a culture exists to nurture it.

That's not to say Techland or Deep Silver are to blame. The entire industry is to blame. I don't just mean producers - developers and publishers - but also our deeply interwoven media (including VG247, when we thoughtlessly post images with boobs front and centre) and consumers (when we vote with our dollars) - of all genders. Together, we foster a culture of sexism that leads to precisely this kind of scandal.