DayZ has been re-classified for release in Australia.

Update: Australia has lifted the ban on DayZ now that it has been modified, according to Kotaku Australia. Last week, the Australian Classification Board de-listed DayZ due to in-game files which would have allowed players to heal after smoking some sticky icky.

The feature wasn't implemented just yet, but Australia still frowned upon the files being included in the game.

DayZ's weed-free modification will apply to all versions of the game in all territories.

Bohemia Interactive will be changing everyone's copy of DayZ to comply with Australian regulations.

DayZ found itself in hot water this week. While trying to approve a physical version for release in Australia, Bohemia quickly found both the physical and existing digital version of the zombie sandbox to be banned. Not quite what the developer was expecting, really.

Why now? It seems the Australian Classification Board missed a trick when it rated the digital edition back in the day. While Bohemia hasn't confirmed what changes need to be made, the Board has. Murder all the zombies and survivors you like, just don't smoke a spliff while you're doing so (via Kotaku Australia). 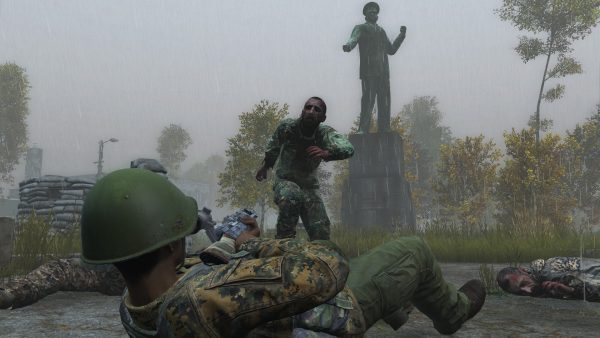 Yep. Turns out, DayZ let you patch up wounds by picking a gnarly-looking joint off the ground and getting lit.

Or at least, Bohemia wanted you to. It turns out the addition doesn't even really work in-game right now. DayZ's been kicked out of Australia for a feature that doesn't work. Buying from the shifty lad down the stairs again, have we?

Rather than create a bespoke edition for down-under DayZ fans, Bohemia will instead update everyone's copy to remove the offending items. It's probably the most sensible option.

Hastily put-together Aussie builds of games that remove blood, violence and other obscenities can be notoriously janky.

"We don't want to separate Australian players from the rest of the world, since many people play cross-region," Bohemia told Kotaku earlier today. "We love that DayZ is the place to meet with friends and experience the game without dramatic regional lag."

Maybe stick to the CBD alternatives next time, Bohemia.