Beyond: Two Souls is more about its writer's personal journey than Quantic Dream wanting to turn a dime. David Cage speaks to Patrick Garratt in Paris.

David Cage doesn't want your money. The Quantic Dream creative head, currently working on supernatural thriller Beyond: Two Souls, is on a mission to write. He's doing what he wants to do.

"I put a lot of myself in the games we make," he said, speaking to VG247 in Paris. "I don't do work for hire. I don't make games to make money. I make games by passion, because I want to share something, because I have something to tell."

You should believe him. It's a consistent message. David Cage is a passionate man, a person trying to achieve his potential. He's a fiction writer. He sanctions creative elements classically associated with film and novel narrative; writing 'what you know' is a prime example.

"I really feel I became a writer on Heavy Rain," he said. "Before that I didn't know what I wanted to say, what I had to talk about. I was just telling stories, borrowing things from different things I'd seen in the past. I really discovered on Heavy Rain that I could talk about myself, and that it was easier to write about things you know, things you experience yourself."

He "never" considered a Heavy Rain sequel, the obvious financial choice given the original grossed over €100 million. Cage wanted to move on. Sugardaddy Sony didn't try to coerce the Frenchman into a second game.

"I really thank them for that," he said. 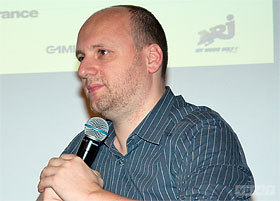 Cage is the founder and CEO of French developer Quantic Dream.

David Cage is a stage name: David De Gruttola is written on his birth certificate.

Quantic Dream, based in Paris, has been responsible for Omikron: The Nomad Soul, Fahrenheit and Heavy Rain. The studio's next game - releasing this October for PS3 - will be Beyond: Two Souls.

While Heavy Rain grew from Cage's experiences as a young father, Beyond: Two Souls sprouted from a sadder seed.

"It was really me being confronted with death. I lost someone I felt close to, and I wanted to write something about that. It's about changing, it's about accepting who you are, it's about confronting your fears. And it's about what's after death."

Beyond is based on a dual mechanic in which the player controls both Jodie and Aiden, her guardian "ghost". The concept started with the idea of a person who could see an invisible someone. While gameplay is complex - it involves two distinct control methods, fighting, puzzle-solving and conversational interaction - it's clear Cage's primary investment is in plot and his personal journey as a writer. Beyond's narrative leaps around chronologically. This isn't the sort of thing people make if they want to sell as many copies as possible.

"Many films are really surprising in the way they deconstruct narrative, and I've always been impressed by the extra layer it adds to story-telling," Cage said.

"Suddenly the audience is not just watching and passively looking at the story being told; you need to think, you need invest yourself in the story, and you need to be clever. You need to connect dots. It creates an extra layer of complexity that I really, really enjoyed."

He added: "You'll never know what to expect. You don't know. You can't tell. Will you be Jodie when she's an adult, or when she's a teenager, or when she's a kid? You don't know. Will I be homeless? Will I be chased? What will happen to me? There's no way you can tell. The fact that the game is totally unpredictable is something I really enjoy, and it's not just unpredictable in story but in terms of what you're going to do, where you're going to be, what the context will be. That's something I found very appealing."

If you're still think Cage is in games for the money, take a look at Beyond's content. The demo we saw in Paris involved a homeless woman giving birth, characters stealing food and street begging. Not shooting bad guys. Cage has always espoused the need to draw emotion from the player, and this has never been more obvious than in Beyond. This is not intended to be a "mass" game. David Cage is trying to make a work of art.

Beyond: Two Souls gameplay, showing off the
relationship between Jodie and Aiden.

"I thought it was really interesting to talk about homeless people from a different angle," he said, talking specifically of the birth scene.

"I wanted to put you in the shoes of someone living outside and begging and being hungry, needing to find a place to sleep. But at the same time, I didn't want to have something that would be purely depressing where nothing good can happen, and I thought that having someone who was pregnant would be something very interesting. It gives you a contrast between the difficulty of someone living on the streets and the fact that this cycle keeps happening, that a new life's coming. That there's hope."

Cage is not a cash-in. He's an artist, or at least he wants to be. He even told me he doesn't "have the talent" to "lie" in his creations. We'll see. Anyone can be talented, David. It's all about doing the work. Every writer knows that.