It seems Niantic has lots of first and second generation Pokemon variants to set loose in Pokemon GO.

It's not just new Legendaries making their way into Pokemon GO - Niantic also has quite a few variant shiny Pokemon ready to launch as well. And we know it because a dataminer uncovered a massive haul while digging around in recent updates.

This information was first uncovered by Twitch streamer Chrales and later summarized by fan site Pokemon GO Hub (as reported by Polygon). What Chrales ultimately discovered was over 100 shiny variants of first and second generation Pokemon just waiting in game code for Niantic to set loose in the wild.

Rather than list every single Pokemon, Chrales worked with Twitter user Leek Duck to create a visual representation of the various Pokemon. Let's start with the Kanto Pokemon:

Oh, we're not finished yet. Take a breath and check out the Shiny Johto Pokemon: 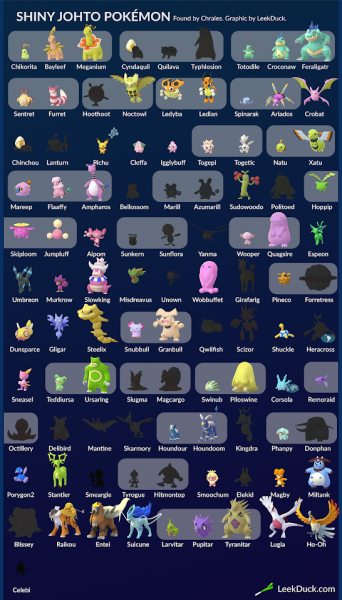 With all these shiny Pokemon just sitting in the game, the only question now is when they'll be available for players to collect. Thankfully there are no shortage of special events during which Niantic could hit a switch and set them loose in the wild.

Gotta catch 'em all, after all.