There have been some damn fine remasters of last-gen titles in recent years. Bluepoint, for instance, has made a name for itself with original-beating revamps of older Sony titles - the developer’s work on God of War, Uncharted, and Shadow of the Colossus being standout examples of how a lick of paint can bring a classic bang up to date.

It’s no surprise publisher Bandai Namco is having a crack at the original Dark Souls, then. Dark Souls is an all-timer - a hugely influential piece of work that game critics still use as a high watermark to compare other games to. Despite that, its age means it could use a bit of a touch up. The most loved game in the series is full of areas infamous for their frame rate dips, and there are rough textures scattered throughout Lordran, backing dead-eyed NPCs.

However, after my brief hands-on with it, it is clear that this is not ‘the Dark Souls of remasters’. It’s the same brilliant game, only with higher definition textures, new lighting and, well, we’ll talk about frame rate in a bit.

Until I ran the footage back, side-by-side with the original version, it wasn’t even a noticeable upgrade. Sure, the new 4K textures look great, but it’s a tidy up, not an overhaul. Even running on a PS4 Pro, it wasn’t impressive. 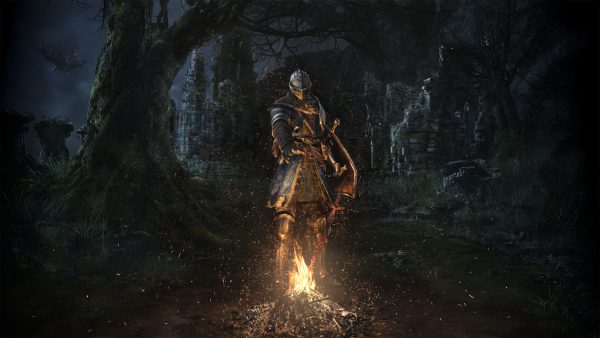 Still, series director Hidetaka Miyazaki’s art direction shines through: the European, medieval gothic style of the Undead Asylum, Undead Burg, and Chapel still providing an interesting and occasionally stunning backdrop to all the death. Tunnels are damp and dark, structures are intimidatingly huge, and the bosses that halt your progress are disgusting and unique eldritch monstrosities. But, then, they always were.

The game has always dripped atmosphere and the inclusion of high definition textures doesn’t make this any more the case.

Performance is an unknown quantity, too. I experienced some stutters in the area near the bonfire in the Undead Chapel, which does not exactly instill confidence. Of course, this isn’t the final build, so we have to give Bandai Namco the benefit of the doubt ... though I wasn’t allowed to travel to Blighttown.

Initially, my plan for this session was to take the Master Key as my starting gift and power straight into Blighttown to see how much it chugged, but was told but that I wasn’t allowed to progress past the Capra Demon and had to take what is considered the ‘linear’ route through the game - Asylum, Undead Burg, Chapel, done.

This isn’t uncommon at preview events, but with Blighttown being the area notorious for the worst dips in performance in the original release, not being able to confirm if it has improved is a worry.

In places, it appears as if the developers just slapped the new textures directly over the old ones, and all the models are exactly the same. This could mean that some of Dark Souls’ performance can’t be fixed with the brute force of new hardware. If this is the case, it’s no surprise Blighttown is being closely guarded for now.

A 1080p resolution and 60fps is regarded as the bare minimum for this kind of remaster, and it would be a shame if Dark Souls Remastered doesn’t hit that frame rate target. Right now, I simply cannot confirm it consistently does, unfortunately.

Thing is, this never really mattered. Taking issue with Dark Souls because of a few select performance issues is like criticising the Mona Lisa for being a bit small. It had been a while since I had played the original game last and, in the time I had with it, it was already starting to get those hooks back in: every inch of progression satisfying; every boss defeated a Triumph; areas and bosses I had visited and defeated many, many times, although familiar, were no less enjoyable.

It’s going to be a great old time to revisit Lordran once again - a place that remains FromSoftware’s highest watermark, despite Bloodborne’s stiff competition. If you’re one of the few who haven’t played Dark Souls, I am insanely jealous of you getting to experience this game for the first time with this remaster, regardless of the tech behind it.

Dark Souls is a true great. If this remaster allows new players to discover it and provides veterans a much more convenient way to experience an old favourite, then it’s time to praise some kind of celestial body.

With the promise of enhanced multiplayer that falls in line with the sequels - which is the one area where those follow ups did eclipse the original - Dark Souls Remastered will likely end up being the definitive version. However, for those looking for a more considerable upgrade, a true next-gen version of one of the best games of all-time, you will likely find yourselves wanting come release.