A new set of scientific research identifies Dark Souls III, Fall Guys and Mario Kart as the most stressful experiences you endure whilst gaming.

A new study, conducted by BonusFinder in collaboration with sports scientists and competitive gamers, discovered that the average players' average heart rate increases the most whilst playing Dark Souls, but Fall Guys and Mario Kart – games supposedly aimed at the more casual side of the gaming market – also have a pretty significant impact.

In the study, 14 players were asked to play 16 of the most popular games currently on the market while having their heart rate monitored. Readings were taken of the BPM rate whilst playing, and compared to the subject’s baseline readings to get a measure of just how stressful various games were – and the results were quite interesting (thanks, TheGamer).

The study discovered that Dark Souls III caused players' heart rates to spike more than any other game, with peaks measuring as high as 127 BPM in some players. When you consider a normal heart rate to be between 60-100 BPM in most healthy adults, you can see how much of an impact that has!

The chart below shows just how stressful various games can be and – to be honest – we’re not all that surprised by the top five entries.

Anecdotally, we’re pretty sure any gamer you ask will mention any one of those games when you ask about ‘stressful gaming experiences’. Just throw Bloodborne or Sekiro on there, too, and you’d be set.

The takeaway from all this? If you’re finding life under the pandemic stressful and intense, stay away from Mario Kart, Dark Souls, and Fall Guys and maybe boot up The Sims or Animal Crossing instead – your heart will thank you for it. 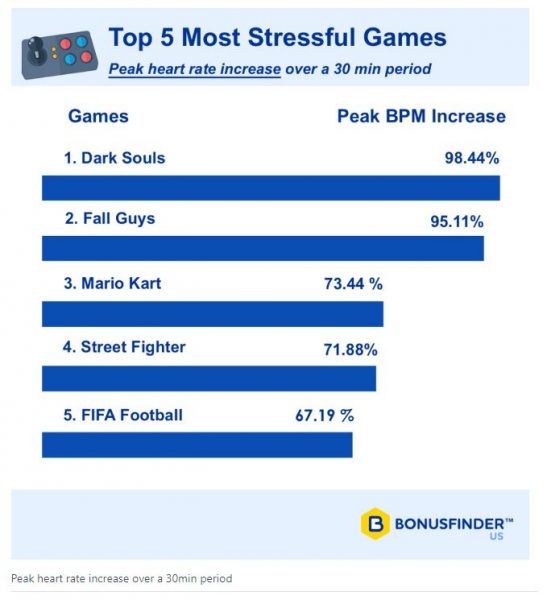