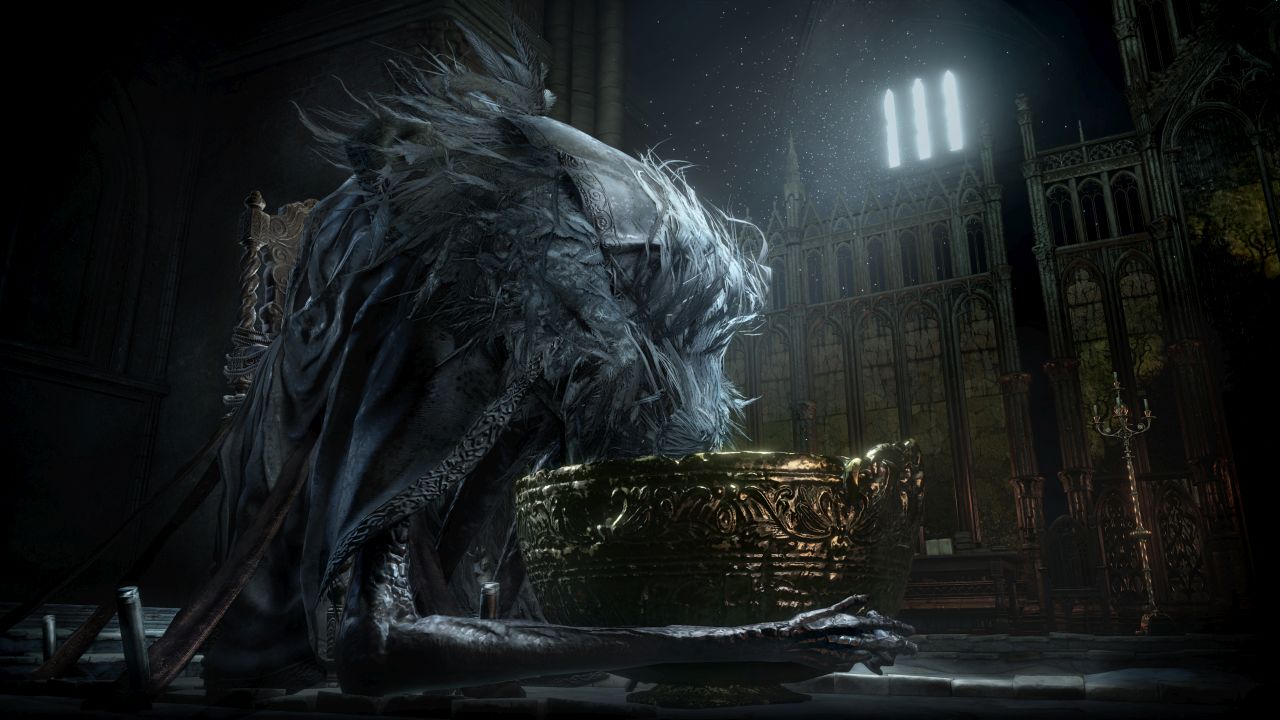 The final boss of Dark Souls 3: Ashes of Ariandel isn't the most terrifying challenge the game has thrown at us so far, but it is definitely epic.

The boss fight is in three phases - Sister Friede, Sister Friede and Father Ariandel, and Blackflame Friede. If you are alone, the difficulty escalates through the three phases, and the most important tip for this fight is to bring at least one summon with you. If you're offline, playing this in the distant future, or just really against co-op, there's an NPC just outside the chapel door you can "summon", but he won't appear until the beginning of the second phase.

Dark, fire and ice resistance are helpful here. That said, agility is going to matter most, probably.

As a cheeseburger assassin, you can do yourself an enormous favour by summoning two real-world co-op phantoms from near the Chapel of Ariandel bonfire. Look for some nice big tanky types with outlandish hats and weapons. That's who you want onside for this.

Sister Friede is a fairly standard scythe wielder and her melee won't trouble you if you're already a veteran of that sort of nonsense.

It's her special attacks you have to watch for. First, she can cast frost along the floor; it hits you hard and rapidly infliucts frostbite, and since it is annoyingly persistent it means you have to be aware of running over it as you move around the arena. This move is easily interrupted.

Second, she teleports, turning invisible and appearing somewhere else - generally directly above your head, which will probably insta-kill you if it hits. Look for the visual effect and listen for her footsteps to dodge this. This move is easily interrupted, thankfully.

Because Sister Friede moves so fast when she has you in her sights, tackling her with ranged or magic spells isn't recommended; what you want to do is get behind her and backstab her over and over again.

Cheeseburger Assassins with two co-op buddies should concentrate on staying a good distance form the action and feathering Sister Friede with arrows; this will interrupt her attacks and give your friends much-appreciated breathing room as they chop her up. If she focuses on you just run away until one of your buddies hits her again.

By far the hardest of the three phases. Father Ariandel joins the fight, clomping around the arena hitting things with his pot and spreading flames everywhere. Between the fire effects and Sister Friede's frost, you can end up with a very bad situation.

The two bosses share a health bar so any damage you to do to either is worth the effort. Father Ariandel takes more damage than Sister Friede does, and in general he's easier to evade than his swift and deadly daughter.

If you are alone, let the NPC attack Friede while you lure Father Ariandel to the other side of the arena. You just want to stay partially behind him and get the rhythm of his attacks so you can chip away at him. Watch for his AOE attacks, and don't miss the great opening after his rush attack - you van get two, three or even four swings in and get away, easy.

If you are a Cheeseburger Assassin, have two buddies with you and they're both marvellously competent, it's actually best to stick with Sister Friede here and let one of the others else tackle Father Ariandel. Once again, your arrows will interrupt Sister Friede's attacks and make life easier for your pals, but attacking Father Ariandel at range will usually pull him to you, which can make things harder for your friends who are trying to keep them apart.

Friede is extremely dangerous in this phase, but at least there's only one of her. With two melee co-op buddies and your arrows, she will barely have time to attack with all the staggering and backstabbing going on.

Alone, with the NPC or in event of death of summon buddies, you need to take this fight very seriously: this is by far the hardest part.

Freide starts handing out dark damage in this phase, and she's much faster than before. In addition to her usual melee attacks she can fly up in the air to divebomb you, cast a magical beam of dark, and unleash a charged explosion that will just wreck you. If she gets off her AOE spells you'll have to deal with them hanging around for ages, and she can inflict a devastating bleed effect.

Going toe to toe with Friede is not advisable; keep your distance. Dodging left works for almost all her attacks, although you need to get a long way from that explosion. Be patient and watch for her to slow down between attacks; that's when you charge. Then it's back on the defensive.

Good luck with this one. When she's down, light the Sister Friede bonfire and accept the Soul of Sister Friede. Now's a good time to try the optional boss - let's head for the Depths of the Painting.