Fans are becoming increasingly eager to get their hands on CD Projekt Red's upcoming blockbuster, to the extent that one particularly artistic player recently posted art of what Cyberpunk 2077 Yennefer could look like.

This isn't the first instance of a Witcher fan drawing up imaginings of what their favourite characters could look like in Cyberpunk 2077. In fact, a variety of players have already designed what cyberpunky Geralt could look like using Cyberpunk 2077's in-game character customization suite, as well as a particularly futuristic version of Ciri.

Here's what Cyberpunk 2077 Yennefer could potentially look like if you decide to model your character after her. 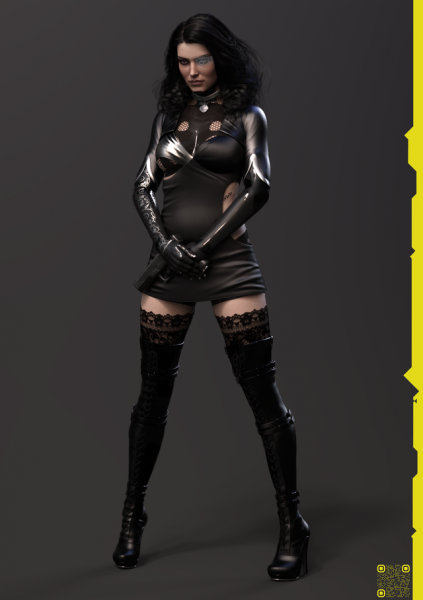 This particular Yen design - which was shared over on Reddit - imagines the sorceress as a corpo, which is one of the three life-paths players can opt to go down in Cyberpunk 2077. There was also a corpo Triss concept posted a little while ago, if you'd be more interested in modeling your character after her - although I would imagine most reasonable people are Team Yen.

In related news, check out this incredible detail a fan noticed during the recent Braindance trailer from Night City Wire. If you're interested in taking a look at something slightly more niche, the 2019 Russian beatboxing champion recently covered the Cyberpunk 2077 theme, and it's absurdly good. I have no idea how he managed to nail the synths that precisely.

Keen for more? Check out 25 minutes of Cyberpunk 2077 gameplay. Also, good news: you can pet the cat in Cyberpunk 2077. (Although that's not quite as cool as the fact that you can recruit the cat as a Viking raider in Assassin's Creed Valhalla).

After being delayed twice, Cyberpunk 2077 is due to launch on November 19, 2020. It's coming to PS4, PC, Xbox One, and Google Stadia, and will receive a robust upgrade for the Xbox Series X and PS5 editions.

If you want a proper deep dive, be sure to check out our Cyberpunk 2077 interview.