Rogue-lites/likes tend to blend together. They often rely on analogous art styles and hit the same notes. Though I could appreciate why they’re popular, barely any have clicked for me.

Every once in a while, however, along comes a gem that I can’t help but get excited about. Curse of the Dead Gods is one of those games.

Curse is, on the surface, a very safe and predictable rogue-lite. It’s an action game played from a top-down perspective, with a world that’s essentially a series of similar-looking dungeons you’re meant to retread for hours. It’s challenging and relies on a fair share of RNG, meaning luck plays a factor in your runs. And since we’re ticking all the boxes, there are even secrets and hidden paths for those who dare explore.

It’s only when I got my hands-on that Curse’s unique qualities came into focus. 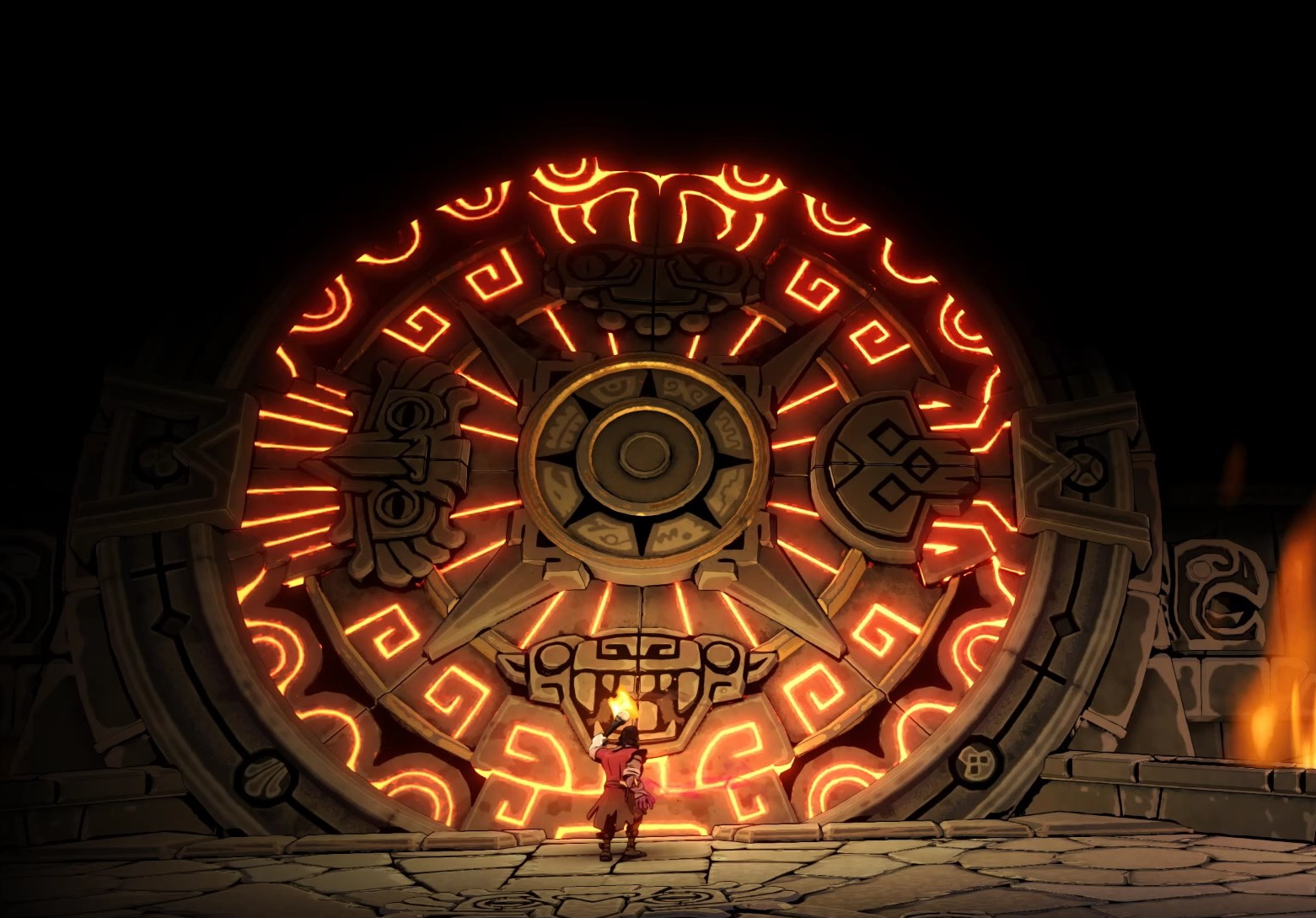 The combat in Curse is the best thing about it. Not the act of swinging a warhammer or lining up a shot with your pistol, mind you - those are great, too - but rather how the game is built around interactive and dynamic combat arenas. Dark and light form the basis of exploration. Rooms start off shrouded in darkness, and you’re given a torch that lets you see just enough around you to avoid traps and explore your angle of attack.

Perhaps you’ll line up a shot from your heavy weapon, down a summoner immediately, or charge up your melee attack for a high-damage opening - there’s always a reason to survey the edges of the room before plunging in. You’re encouraged further with the placement of traps you can activate. If you know there’s an explosive barrel close to that group of enemies, you best shoot it or quickly dash in to trigger it.

Different rooms also offer plenty of environmental hazards, most of which can be used to your advantage. Crucially, though, torches are automatically unequipped as soon as you pull out your weapon, adding an element of risk to these maneuvers since you can no longer see those environmental hazards. This set up phase not only gives the player room to breathe between fights, it also allows for some degree of control over encounters. Utilised correctly, those precious seconds offer a clear advantage at the start of each fight.

It’s immensely satisfying to trigger one trap after another as chasers get whittled down to a single straggler.

There’s another layer to this in the combat model itself. Curse of the Dead Gods’ arsenal encompasses a number of weapons with unique properties, such as attack speed and arc. This is further explored in their animations and combos. The game doesn’t do a great job of detailing these effects without you manually trying each weapon, but that’s a minor issue.

Regardless, this introduces some depth to what would otherwise be a numbers game of raw damage and affixes. Keeping this in mind is essential, as you need to be thoughtful about how you take on enemies. Committing to combos too often creates a big windup that leaves you open. You also have a stamina bar that needs to be managed, and though it’s mostly there to stop you from spamming dodges, it can also curb your momentum if you don’t pay attention.

You begin by default with a pistol in your off-hand. Pistols and other ranged weapons suffer the most from stamina drain, and it’s easy to eat up your last chunk of stamina with a desperate shot, causing you to take a couple of big hits. This is likely a balance consideration, but a better solution would be to nerf the damage of pistols or increase their charge times a bit, since the current implementation is often frustrating. Ranged combat could use a bit of work overall, in fact. The aiming reticle should follow the right stick/mouse, not the way the character is facing - I would like to be able to dodge once and quickly whip around to finish off a chaser, but I can’t. I have to dodge twice to create distance, then rotate my character until it’s facing an enemy and shoot. Not quite John Wick.

Like all great combat systems, Curse also has a satisfying parry. It works as you’d imagine: time your block correctly and you stagger the attacker. Enemy attacks are mostly highlighted with a clear red flash, but timing varies so as not to make them easy to predict. Pulling off a parry, especially if you’re stuck between a few enemies, is exhilarating. Enemies stagger long enough for you to land a few hits. With how wide your arc is for most weapons, this can also interrupt other enemies close by.

Animations are smooth enough that you can quickly cancel into a block, but a slight delay stops you from spamming it. Working parrying into my attack patterns, especially early on, was all I needed to ease through the early parts of a dungeon and emerge relatively unscathed. 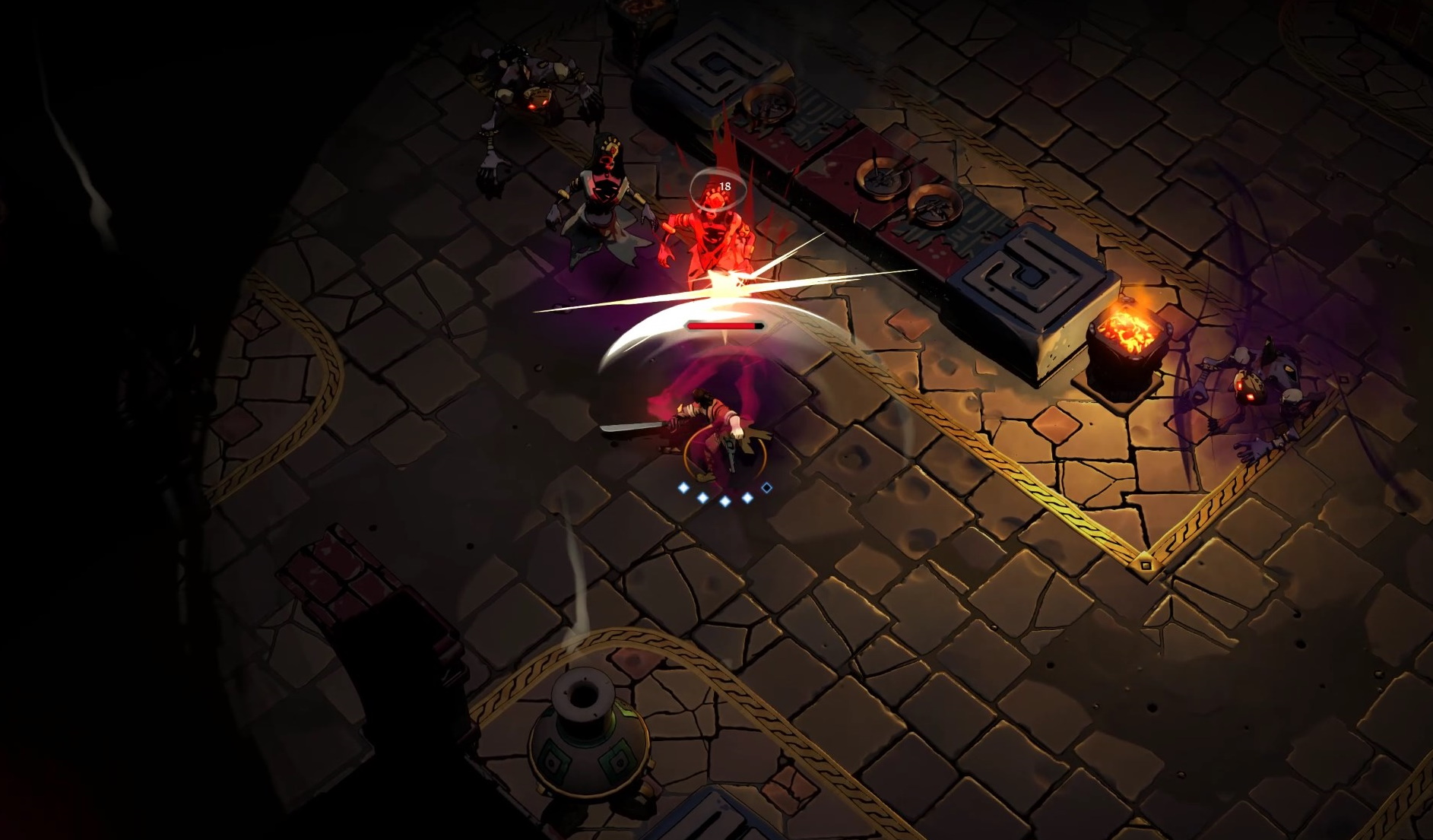 Saying that, health damage is not the only thing you have to worry about in Curse - there’s also Corruption. By default, every room you enter adds 20 Corruption to your meter, which starts out at 0/100. Assuming you don’t take any more Corruption damage from enemies, it’ll take you five rooms to fill up that bar. That’s not a lot of rooms, especially if you’re happy to take a detour for extra gold here or a stats boost there. When the bar gets full, your character gets cursed. Any one of one 14 Curses can apply to you at that point.

This makes the mechanic a bit puzzling. I get that you want to punish players for taking Corruption damage in fights, but why penalise those who are simply making their way through the game world? Though some Curses can create opportunities, I found most to be a burden. Exploding enemy corpses can be used to your advantage, but what am I gonna do with the one that causes gold chests to deal Corruption damage? Great, now I won’t open anymore chests for the rest of the run.

You may also be tempted to offer blood - rather than gold - to obtain certain items as you explore, or heal at a shrine. All of that adds to your Corruption meter, and it can sometimes feel like you’re getting cursed every other room. Getting cursed clears the Corruption meter and starts the cycle anew. Random buffs and debuffs are part of how rogue-lites work, of course, but I am not clear on the role of this mechanic here - it seems to actively discourage exploration, which already has risk and reward baked into it by default. 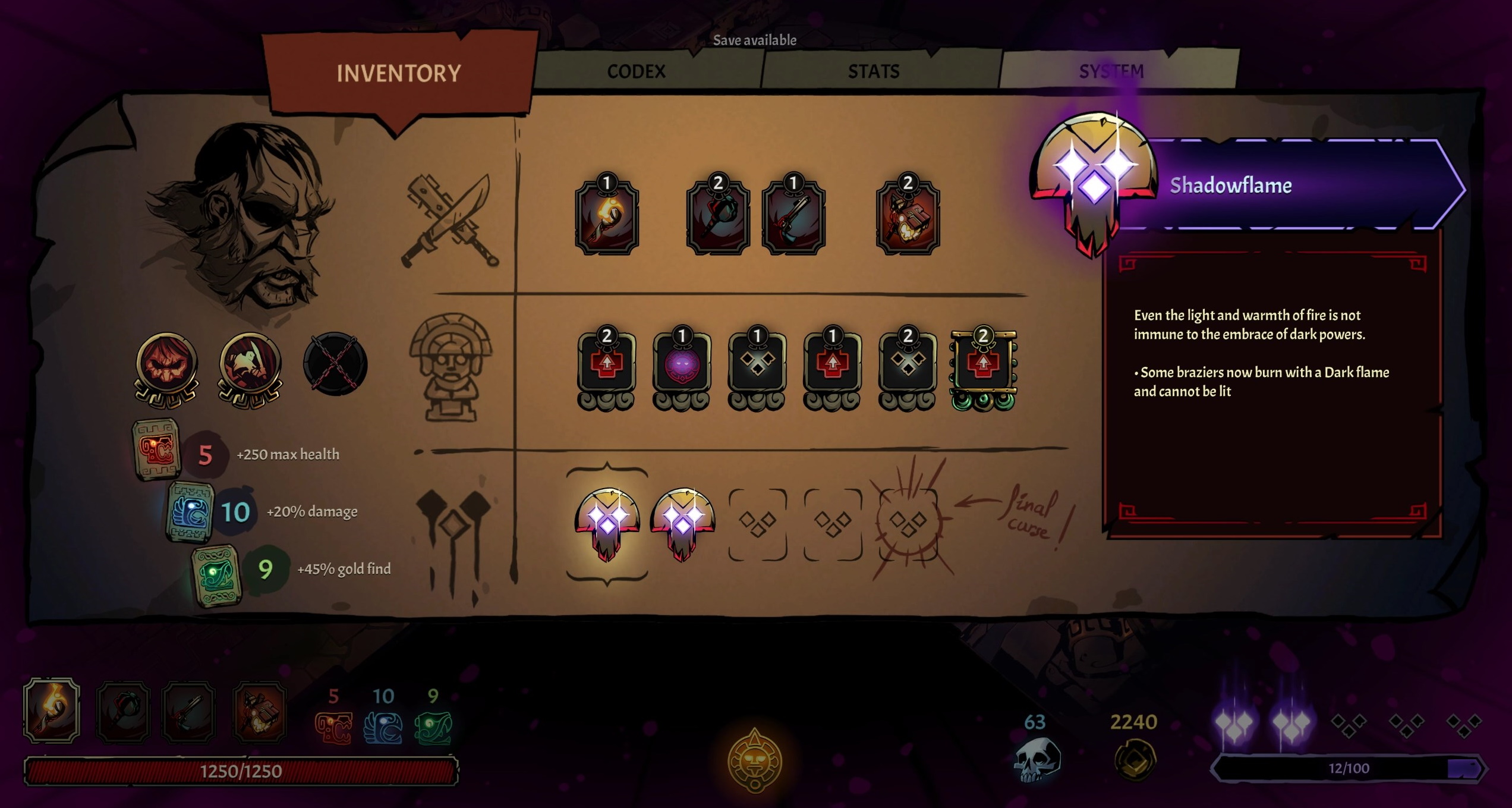 Progression outside runs, as with many parts of Curse, is incomplete in the current build. You collect a currency as you play, which can be spent on passives called Blessings. You can buy as many Blessings as you like, but equipping more than one requires defeating bosses. Out-of-run progression as a result is hampered, because you rarely feel like you’re growing with each botched run.

Curse is more interested in mechanical growth rather than number inflation, which I can appreciate. Despite its demanding combat, the game is more forgiving than other rogue-lites from the off, with a large HP bar, the dodge, and the ability to start fights on your terms. Unfortunately, it’s over all too soon. Though I was constantly surprised by the level of polish in the core mechanics, I quickly ran out of things to do. There’s currently one temple in the game, and I have already seen repeat configurations of hallways and arenas in just a few hours.

The developer promises two more temples over the course of Early Access, so you may want to hold off until then. For now, if you’re not too fussed about the volume of content, you’ll find a compelling action game with one of the most satisfying combat models in any rogue-lite.

Curse of the Dead Gods is out now in Steam Early Access.