Crysis 3 is a shooter, but it has great potential as a stealth game in its own right. Dave Cook goes hands-on and explains why it's comparable to Dishonored in many ways.

Last week I interviewed Crysis 3 producer Mike Read about the game's more human elements, CryEngine 3 and the troubles that lie ahead in the next generation. Read what he said here.

Crysis 3's achievements leaked recently, and we've got the whole list right here. But as always beware of spoilers.

Crytek's '7 Wonders' video series shows off a new element of Crysis 3 each week. Check out the latest episode here.

Too many developers feel that empowerment comes from behind the iron sights of a gun. In a time when shooters run rife throughout the industry, it's not too mad to suggest that we're becoming a little desensitised to the power trip by now. In the rock-paper-scissors game of genres, I'd argue that stealth trumps gunplay every time.

I'm a big stealth fan. I matured alongside the Tenchu series, which taught me that lying in wait patiently among the undergrowth for that perfect, undetected kill can create a greater feeling of euphoria and accomplishment than slotting my 100th bad guy with a rifle.

You have to earn stealth kills through patience, mapping out the lay of the land and thinking on your feet. Crysis 3 - much like Dishonored before it - gives players a simple choice: take the guns-blazing action route, or take your time and progress undetected. I strongly advise the latter.

Last week I sat down to play through a new section of Crysis 3 preview code on PC. I was a latecomer to the series, but I'm now a fan, thanks to the slight opportunity for stealth play in Crysis 2. However, Crytek's latest really ramps up the sneaky approach, and this was evident in the area of Chinatown I battled through.

I could clearly see that Crytek has learned a lot from previous Crysis titles, as well as the original Far Cry, as the game really does feel like a culmination of ideas. Hearing CELL operatives nearby, I triggered Prophet's stealth cloak and slowly crept through the dense vegetation that chokes the ruins of New York City.

Visibility is constantly low thanks to the thick plant-life, and the murky darkness of the swamp-like streets. Spotlights hover overhead creating dynamic shadows and threaten instant detection, while proximity alarms buzz menacingly in the thicket, and will trigger if Prophet gets too close. 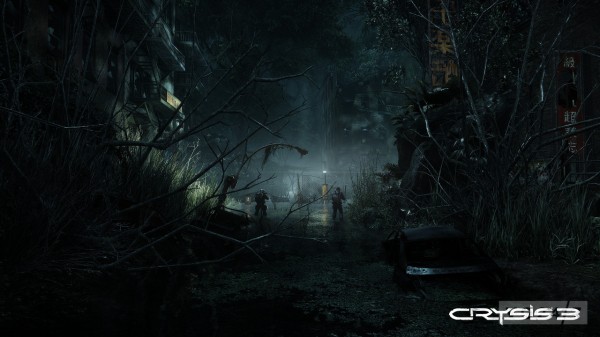 There are so many tricks and mechanics at play here that make Crysis 3 a solid stealth title. Like Dishonored, you are given an objective and told - quite simply - to get there by any means possible.

This means traversing ruined apartment blocks that offer great verticality, skirting around enemy turrets under the cover of darkness, and picking off hapless enemies that stray nearby. You feel like a powerful hunter who can decide which enemies live or die in an instant. This is real empowerment.

Using Prophet's Nanovision to pick out enemy body heat, you can take aim and slaughter foes silently with the game's new bow weapon. Of course, bows are a clear fad in the industry right now, but here they make sense. Stalking foes for ages, mentally mapping out their patrol routes and scoring a long range kill makes you feel brilliant. Best of all, you really earn a tangible sense of satisfaction.

I say 'patrol routes', but unlike Crysis 2, the CELL operatives and Ceph creatures are not dumb or predictable. They never follow strict lines as they walk the map's perimeter, and if you make yourself heard, they can often activate their own stealth cloak, rendering your Nanovision useless.

Watch VG247's Sam Clay play the area
I'm talking about in this article.

Worse still CELL troops will go on the aggression if they know you're nearby, shouting taunts at you to try and break your resolve. As a fan of stealth it all fits like a glove, and although you can go loud and unleash hell with your firearms and armour mode if you want to, I felt that my victories were hollow by comparison.

Like Dishonored, Crysis 3 has a scaled-back power set in the name of creating a solid tool-kit that supports stealth. You can still use the Nanosuit to sneak up on enemies and then - say - power kick a car into their face, or power jump up to a vantage point before taking them out from above. There are many possibilities for those who want to find them.

If Crysis 3 can ratchet up the tension by having a lot of these wide, open 'urban jungle' areas, then it could comfortably sit alongside Dishonored's brand of liberating stealth play. Still, if you're a shooter fan, you will still enjoy the game's stunning visuals, satisfying gunplay and action. What's important is that the choice is certainly welcome.