Command & Conquer is making a comeback as a huge free-to-play experience later this year. Dave Cook goes hands-on to see if it lives up to Westwood's legacy.

Developed by Victory Games, Command & Conquer is free-to-play and will launch with factions and units from the 'Generals' timeline.

The studio told VG247 that it would add the Tiberium and Red Alert timelines to the game after launch, as well as exploring entirely new fictions.

Although it's free, Command & Conquer will feature multiplayer and single player skirmshes against bots at launch, but no solo campaigns. Those come later, we were told.

The impact of Command & Conquer shouldn't be understated. It brought the notion of RTS gameplay to a wider audience and led fans on to other titles such as StarCraft and Company of Heroes.

It has a long and mostly-accomplished history, but I get the impression that opinions have waned in recent years. EA and Victory Games seem to know it too, as they're stripping the series back to its bare bones in this latest release.

Although it was originally announced as the second instalment in the 'Generals' strain of C&C games, it's now simply called 'Command & Conquer'. There's significance to the name.

Victory's plan for its free-to-play game is to launch it as a C&C Generals title, then create off-shoots focused on the Tiberium and Red Alert canon further down the line.

At a recent EA showcase event, I was also told that the studio wants to explore new timelines beyond these three varied settings, based on entirely new fiction.

For now however, Command & Conquer focuses on the mechanics and timeline of Generals, giving players the option of controlling three initial factions. Thanks to the power of microtransactions, the studio has plans to add more groups over time, as well as new generals that will add specific bonuses to your army. I was told that some content will be free, but that remains to be seen. 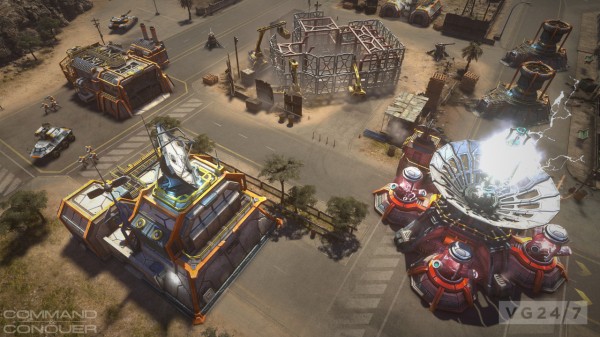 First up is the European Union, which is the game's high-tech faction. Their ace in the hole is the Railgun Tank, a lumbering, ferocious monster that can overwhelm opponents in large numbers. I asked the developer sitting next to me if tank rush was going to be a pain in the tits this time round, but I was assured that it won't be a 'win-all' strategy.

On that note, the Asia-Pacific Alliance faction is absolutely geared towards swarming opponents with a sheer volume of infantry units. Their squads take less time to build, so there is potential for rolling large teams of varied units across the map. Fail to keep the swarm balanced however and they'll be flattened in moments.

Finally, the Global Liberation Army is the game's resident terrorist group, and gives rise to what Victory is calling 'improvised' play. It's a faction that must react to whatever opponents are doing on the fly, using stealth and subversion rather than brute force. It also comes with two unique tech trees called 'Salvage' and 'Toxin'.

My play-test begins in control of the Asia-Pacific Alliance faction on an African map called Blood Diamond. It didn't take long for all of the classic C&C thought processes to return as I created power stations to keep the juice flowing, started training troops in my barracks and sent my resource harvesters out to salvage scrap.

It felt like classic C&C even if a few things had changed. The presence of two power tiers for electricity and oil takes some getting used to. You need a mix of both to create more advanced vehicles, so you need to place oil derricks and power stations around your base to keep them topped up.

While previous C&C games would see your ore or Tiberium trucks intuitively seeking out resources, here you must direct them to salvage caches dotted around the map. Not only do these stockpiles create suitable hubs for base expansion, or new sites altogether, but they can give rise to skirmishes over resources. 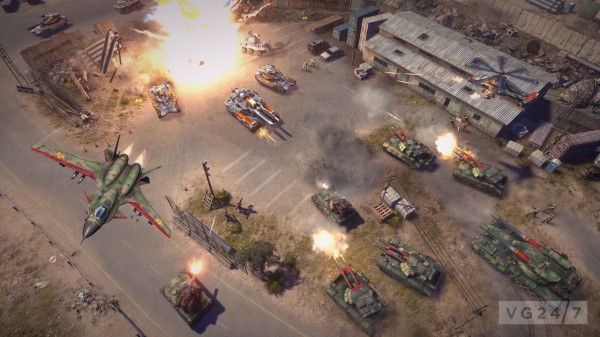 Everything feels natural if you're a fan of the series. Old tactics such as being able to garrison buildings with troops, and create advanced facilities to access higher tech trees will be familiar to veterans, suggesting that Victory Games is keen to recapture the essence of the series.

New tricks such as placing propaganda towers near troops - thereby giving them a health boost - add tactical breadth to each encounter, but of course nothing beats a good old battle between the muscle of infantry and tanks. As a way of testing out the developer's claim that tank rush was no longer an option, I created a huge batch of assorted tanks and rolled them up the map to my opponent's base.

The Frostbite 2 engine kicked in as my tanks crunched over cars, causing them to burst in a shower of nuts, bolts and shrapnel, revealing more of the map's fog of war as I advanced. Everything felt chunky and satisfying, making me believe I was unstoppable, but after reaching my enemy's base my tank brigade was reduced to ash in moments. I felt like a wally.

Instead, what you really need is to tap in into the rock, paper, scissors mentality of battle by creating troop and vehicle types that will counter attacks of any form. Aircraft, ground-to-air defence vehicles and a mix of standard and special infantry - I recommend the flamethrower troops - are all needed to back up your tank squads.

I think this is the most important element of a solid strategy game - that no one tactic can defeat absolutely everything that stands in your path. Victory Games has - so far - given me no reason to believe that such a shortcut exists, so you can consider me very intrigued in what's next in store for Command & Conquer.

It was a fleeting hands-on session, but most importantly, the game feels like part of the series. With no campaign at launch, and plans to monetise the hell out of new generals, maps and modes after along the way, I'm keen to see just how much of the game freeloaders will get gratis. For now though, I'm keen to play more.