Update: In the wake of recent allegations against Chris Avellone, Techland has announced that it is no longer working with him for Dying Light 2.

Techland has posted an update on Twitter since this article was originally published. The screenshotted statement is embedded below. 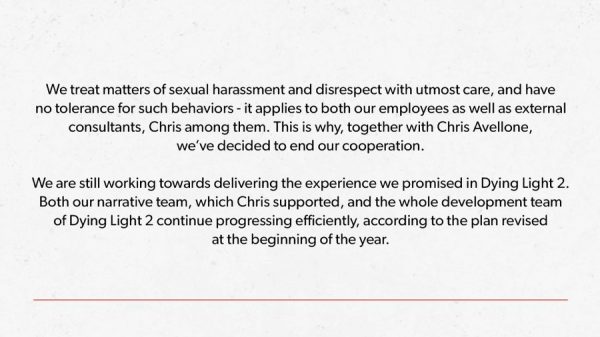 A spokesperson for Vampire The Masquerade: Bloodlines 2 has also reached out to inform us that the last contributions Chris Avellone submitted to Bloodlines 2 were "replaced several months ago," as opposed to recently.

Original story: Paradox Interactive has said that anything written by Chris Avellone for Vampire: The Masquerade - Bloodlines 2 has been removed from the game in the wake of recent sexual harassment allegations made against him.

This comes from a tweet posted by Gamasutra as a follow-up to an article concerning Avellone’s involvement with Dying Light 2.

“Bloodlines 2 publisher Paradox Interactive has been in contact to explain that Avellone was only ‘briefly’ involved in the project, and that ‘none of his contributions remain in the game that Hardsuit Labs is continuing to develop,’” reads the tweet.

The report clarifies that Paradox had nothing to say in relation to the allegations that Avellone had sexually harassed multiple people. It merely stated that anything written by him was no longer present in Bloodlines 2.

"Chris Avellone briefly worked with the Bloodlines 2 writing team early in the development of the game," Paradox told Gamasutra. "Through an iterative creative process, however, none of his contributions remain in the game that Hardsuit Labs is continuing to develop."

According to the article, Dying Light 2 developer Techland has also said that it is “looking very closely” at the claims against Avellone, mentioning that it has “no tolerance for such behaviours.”

"We take matters of sexual harassment and disrespect with utmost care, and have no tolerance for such behaviors - it applies to both our employees as well as external consultants, Chris among them," a Techland spokesperson told Gamasutra.

"That is why we are currently looking very closely into the matter. We will provide you with information on our next steps soon."

Avellone’s involvement with The Waylanders has also ceased, as evidenced by a recent tweet from its lead writer.

“Chris is no longer on the project, and I’ve been the lead writer all along, not him,” reads the tweet. “Waylanders has very little writing by him as it stands, and I’ll be taking a look at his scenes.

“No one on the team knew anything about this. We’re handling it, and I’m open to feedback.”

Since people made allegations against Avellone, as well as a variety of other prominent industry figures, more victims have been sharing their stories. Earlier today Twitch CEO Emmett Shear was accused of having laughed off reports of abuse by Twitch partners at a recorded meeting last year.