It's amazing what you can find when moving home. VG247's Dave Cook takes stock of his forgotten gaming treasures as he heads back to Scotland, and reflects on the state of the industry today.

I'm in the process of moving back to Scotland after staying in England for over three years. Much has happened in the games industry during that time, and right now my flat is a maze of dusty cardboard boxes bound together with shoddily-cut packing tape.

Inside you'll find several relics, such as the Mega Drive I've owned since 1990, my fledgling NES collection and two Streets of Rage 2 cartridges - just in case one of them breaks. Dusting these things off and packing them away really made me take stock of everything that has happened in the last few years.

I took a massive pay-cut to come to England in 2010 and give the old 'games journalism' thing a try after years of trying to break into the paid circuit. I started to see the industry in a new light and I've been lucky enough to have met many game developers I worshipped like gods when I was a kid. It was absolutely worth it.

Looking back I realise I was pretty ungrateful at the start. I took the free press trips for granted - I no longer accept them however - I viewed meeting game developers as just another unexciting part of the job, and I didn't realise the implications of accepting free merchandise. To me it was just the done thing, one of the unspoken rules of the industry.

But over time - and thanks to the old Doritosgate meltdown last year - I can see how far I've come in terms of appreciating the job and how much the industry has changed.

I get now that taking freebies has implications and that it's much better to act as independently as possible in the name of integrity. Truth be told, the job just got me excited to the point of honest, genuine ignorance. In short, I was an aloof idiot.

The industry really has moved on in many ways, and I was reminded of this constantly as I taped up all my eBay spoils. All of my 16-bit cartridges alone took up two pretty hefty boxes, which is a problem you don't get on Nintendo's Virtual Console and other digital channels. Where once I cherished these pieces of plastic like future unborn sons I now viewed them as a cumbersome annoyance. 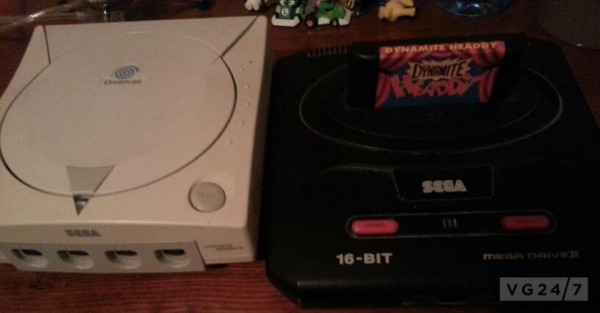 Be it age, or just the fact that I'm getting used to my lovely digital libraries I really didn't feel that emotionally attached to my boxed copy of Vagrant Story any more. I could happily bin the box and keep the disc, or worse still flog it on eBay back whence it came. I didn't go through with it though.

Then I started to imagine how the rest of you felt about this issue. As publishers seem hell-bent on re-releasing the meat of their back catalogues on digital platforms, is there a chance that the physical boxes really are losing relevance? I used to laugh off this notion until I binned all of my current-gen boxes in favour of a single, easily-stored CD wallet.

It didn't hurt to do that as much as it might have done - say - five years ago. Seriously, if you tried to prize the Dreamcast out of my hands in 2008 you would have found the corner of my Power Stone box lodged in your eye. But now, in all honesty I don't care any more. I really don't.

That's not to say the games themselves have lost their value, as I've said many times on this site that I'm one of the least-cynical game critics you could ever meet. Seriously, the slight hint of a teaser trailer for some new project gets me bouncing in my seat like a moron. The hard fact is that I love games.

If that's the case then shouldn't I be more cut up about binning all my game boxes? Probably, but perhaps this is the digital, switched-on world we live in now? Perhaps it's OK to part ways with the past and look towards new, exciting things in the future?

As I thumbed through my CD wallets full of old PSone games that I scrimped and saved for over the years since my teens, I realised that it's not the box I'm attached to, or even the disc itself. But it's the memories attached to the experience that I'll never forget.

Be it on a physical disc or delivered through the wire over Steam, I truly believe that no matter what happens to the games industry in these volatile times, the experience is the one constant that will always make this hobby - and the industry that provides it - such an incredible phenomenon to be a part of.

I feel lucky to be here.