Carbine's released the first image of its about-to-be-announced MMO, showing a space scene.

The game itself, to be published by NCsoft, will be announced at gamescom in Germany next week.

The image was posted as part of a blog post from art director Matt Mocarski, in which he confirms the game is a "future fantasy" affair.

The title's art has been influenced by "American and European comics and American and Japanese animation" and will include "expressive characters with high-personality, and lush beautiful backgrounds."

Animated films such as Atlantis, The Secret of Nimh, and Princess Mononoke "really nailed the overall look of the style," added Mocarski.

"We know that our game was for adults so we studied shows like Naruto and Full Metal Alchemist to see how they balanced a unique visual style with stories that had both humor and drama.

The team also looked at comics such as Hellboy, Battle Chasers, and Tank Girl "to influence our balance of technology and fantasy": the game will include both sci-fi and fantasy elements.

Carbine has hand-painted all the game's textures. "We make sure everything has a strong silhouette with really strong personality," said Mocarski.

The studio has started to increase focus on the game in recent weeks, previous saying it'll have puzzle elements and that internal testing is currently underway.

NCsoft will go large on this next week. Keep it locked on our gamecom coverage for full details. Follow Carbine on Twitter here. 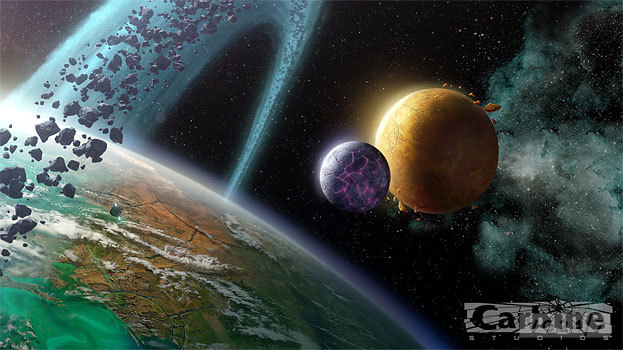