Gameplay footage of a cancelled SEGA game that was supposed to be set in the same universe as Sonic the Hedgehog has surface online - here's a clip of Astropede.

Segabits recently published a report on the game, as well as a complementary video on YouTube, which you can check out below. The first thing I noticed is that the eponymous Astropede looks so much angrier than the blue hedgehog that became so globally ubiquitous in his place. He must have know Sonic was always gonna go faster than him.

"I must continue to proceed quickly," I imagine Astropede saying in place of Sonic's more casual and far more beloved "Gotta go fast."

Astropede wasn't always angry though. In some of the concept art unveiled alongside the new footage, he actually looks happy. That was before that hedgehog prick came along and stole his thunder - stole his destiny. Just look how cheeky his grin is in the picture below. 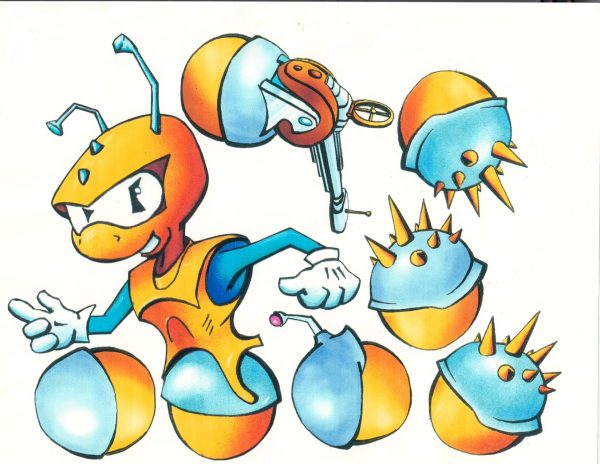 “After the original pitch to the executives at SEGA America, they gave us the go ahead to make a playable version," said former SEGA artist Craig Stitt on the Sega Retro Gamers Facebook page. "Myself and Ken Rose went to work.You might recognize the art as being from Sonic 2’s lost 'Hidden Palace Zone.' I figured since it didn’t get used in Sonic 2 I might as well use it here and save a lot of time."

"I also reworked the basic lattice in the art to create the art for the background in the first Astropede video I posted here. In that case, I reworked the art signiicantly, but if you look you can see the underlying nature of the pattern is the same. I also used the art from Hidden Palace Zone as the foundational art for Sonic Spinball’s Toxic Pools level. (clearly I really liked that little piece of artwork).”

In related news, the Sonic the Hedgehog 2 theatrical release has been scheduled for 2022. Honestly, Sonic is running rings around the silver screen now while poor old Astropede is just frowning his way through an unfinished build of his game-that-never-was on a derelict Mega Drive. Sad.