Call of Duty: WW2 will be revealed in just a few more hours, but hey - waiting is for suckers. 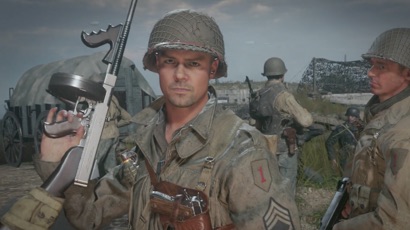 Call of Duty: WW2 will be sold at stores, and some of the people working at those stores are so excited they've broken whatever NDAs they're under to share images of newly-received marketing materials.

The latest Call of Duty: WW2 retail leak, shared on Twitter by BERNiE HiGHROLLER‏ and passed on via Charlie Intel, shows off the Pro Edition, which is exclusive to GameStop in the US.

According to this source, Call of Duty: WW2 Pro Edition comes with a collectible steelbook and the inevitable season pass, and "additional bonus content", which usually means skins or multiplayer goodies.

The images also make mention of a Call of Duty: WW2 PS4 beta, which is no surprise given how much Sony and Activision want to have each other's babies.

Oh, and pre-orders include an exclusive Call of Duty: WW2 hat. Like, a real world hat, not an in-game hat. I don't think they wore snapbacks during WW2.

Developed by Sledgehammer Games, Call of Duty: WW2 will be revealed at 10:00am PT/1:00pm ET/6:00pm UK April 26, so we don't have long to wait before all this information will (probably) be freely available on retailer sites.

An earlier retail leak dropped some details on Call of Duty: WW2's campaign and standalone co-op story mode, and Activision itself accidentally leaked Call of Duty WW2 screenshots through the franchise website.

Call of Duty: WW2 is expected to release on PC, PS4 and Xbox One on November 3. As usual, it will almost certainly be one of the biggest entertainment releases of the year, making every other game and most books, albums and movies look like small beans indeed. It's no wonder Activision can't keep a lid on it, hey.