Call of Duty: Infinite Warfare's multiplayer lets you play as a space soldier who can turn into a sort-of killer robot dog.

Fully embracing the shark-jumping madness that has engulfed the Call of Duty brand since it shifted into a science fiction shooting game, the team at Infinity Ward has added Combat Rigs to the game - six customisable combat suits with loadouts kitted with special weapons, payloads and perks.

One of those Rigs is "Synaptic", a robotic operative that includes the payload "Reaper" as a special perk. Fill your meter through kills and objectives, hit the shoulder buttons and the player gets down on all fours for a speed boost and instant melee attacks. Mate, you just turned into a robot dog.

I've played the thing. It's really intimidating seeing that dude sprinting across the floor at you. He doesn't want his tummy rubbing, know what I mean?

The other Combat Rigs have suitable 80s action figure names too; Phantom, Stryker, Merc, FTL and Warfighter (Warfighter!). You're not limited to a preset loadout though, you can mix and match pieces between Rigs on the fly during a match. My hour hands-on time wasn't nearly enough to cycle through all the new options added to multiplayer, but you can see there's already months' worth of options hitting when the game drops on day one. 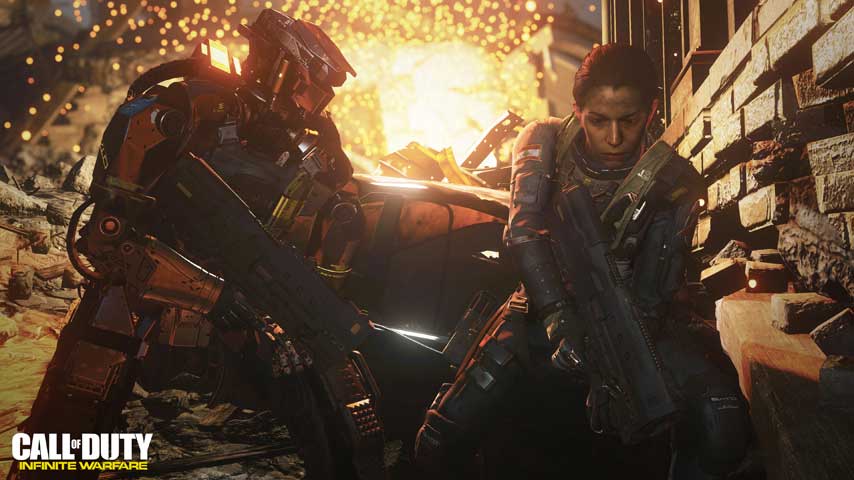 Infinite Warfare also has weapon crafting with parts that can be bought with the new in-game currency, Salvage, allowing players to construct hundreds of weapon variations. It wasn't something we could sample in our short play time, but what was on hand gave us plenty to get our teeth into.

While Infinity Ward wants the weapons to feel like the real thing, the science fiction angle of the new Call of Duty overshadows that thinking. Where else are you going to find a Black Hole Projector sucking players out of cover and flinging them across the room? Or a payload special that vaporises an enemy into dust with one shot? AK 47s don't feel the same after that.

The maps and movement in Infinite Warfare continue to build on the fluid gameplay from Sledgehammer's Advanced Warfare and last years Black Ops 3. Double jumping, wall runs and sliding have players bouncing around the maps. Movement is key, and I felt that even as an average Call of Duty player, so long as I kept on my toes I could get semi-decent kill streaks regardless of a finely tuned loadout. It helps to have a gun that can suddenly shoot in two different directions at once, but you'll still get the job done with a standard SMG if you've got quick reactions, a little bit of luck and the balls to take the fight to the enemy. These are fast-to-combat environments that have you back in the fight within seconds, even after someone called a nuclear strike down on your ass.

As well as earning Salvage during matches there's the new Mission Teams progression system that tasks you with hitting extra objectives. Complete these and you'll unlock exclusive call signs, camo and weapons that can only be unlocked this way. For the dedicated, there's going to be a lot to earn and you'll get the kudos that goes along with it.

Those are the headline changes to Call of Duty: Infinite War's multiplayer, a game that feels as familiar as a yearly update should be. There's enough fresh weapons, upgrades to tinker with, and tight map design for it to feel like a fresh game that I want to jump back into. As much as I balked at COD In Space, Infinite Warfare's multiplayer is as slick and fun as its always been.

You'll be able to see for yourself when the beta goes live in October.