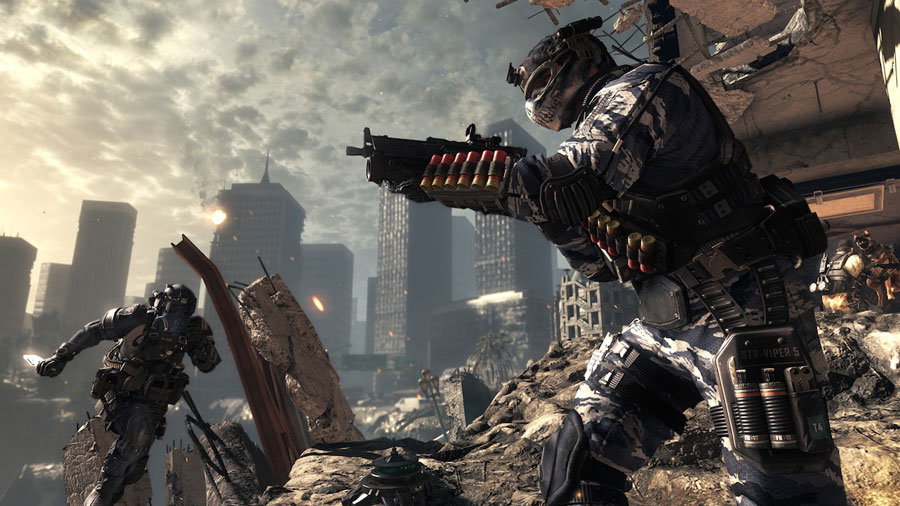 As per usual, the mission starts with a cut scene. Elias explains that Rorke's body was never found and he was declared MIA. Hesh asks why he's hunting Ghosts and Elias explains that the Federation got to him first. If the Federation can turn him, they can turn anyone. What's worse is that a Ghost never stops until his mission is complete, so they must find Rorke before he finds them. The team is headed back to Caracas where it all began.

You're back to present time. Hesh and Logan are now wearing the masks of the Ghosts. Use the Optical Scanner to confirm your target, Ramos before using the zip line to reach the building. You're still on the zip line but you can repel between floors. Listen to Keegan's instructions and move between the various floors and rooms taking out the targets he calls out. When you're all clear, cut through the glass and enter the building.

Follow Keegan to the power system and upload the virus. A patrol comes by but you have time to finish the upload and hide in the cubby hole. You'll be spotted but Keegan has your back. Hook back up to the ropes and kill the power. Use headshots and take out the two guards on the left balcony. Keep repelling down and use your knife to kill the lone guard below. As soon as you do you're attacked, take the lead guard out by throwing your knife, Keegan will pick up the straggler.

Keep tailing Keegan and ambushing the unsuspecting guards as you go. When you come to a large group shoot out the television and activate the strobe on your gun. Move around the room and take out the blinded Federation guards. When you get the all clear turn your strobe off and follow Keegan to meet up with Hesh.

Kill the power to the elevators and start working your way through the opposition. When the last target falls hook up to the ropes get out of there. Look up to see the floor you were on explode and the enemy fall to their deaths. Repel down and work your way towards the High Value Target (HVT). Don't let them pin you down, push forward. If an enemy gets to close, melee them with your knife. When you get the all clear Hesh tells you he's found Ramos.

As Keegan and Hesh interrogate Ramos, Rorke comes on the television and tells you he knew you were coming for him. Hesh screams at him for trying to kill Elias. Rorke comments that the sons of Elias, boys, were sent to do a man's job. Rorke says that a decade ago Elias left him to die in Caracas, and from this night forward he can live knowing he sent his own sons to their death. It was all a setup.

Follow Hesh and Keegan through the building to the window. As the building collapses you'll start to slide, feel free to shoot any helpless enemies as you go. When you break through the window pull your parachute and end the mission.