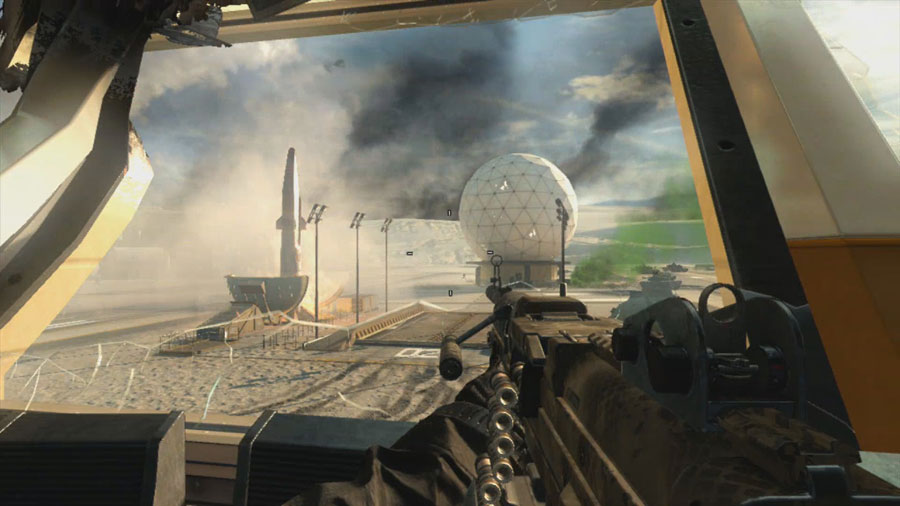 The Federation has their satellites and missile program operational. An assault team is headed to the Federation's space station and take control of their orbital weapons. The Ghosts are tasked with taking out the space station's early warning array on the ground. You can expect the most intense fighting of the war. Rorke could be in the area, but the priority is on destroying the array.

As the mission begins it's not clear who you're playing as, but you're controlling the weapon system for a tank. When you hit the ground you'll follow the rest of the tank squad. As you encounter resistance start taking out the Federation tanks. Switch to guided rounds to take out the attack choppers. This part of the mission is just a matter of destroying the targets indicated on screen. Be as accurate and quick as possible to avoid taking too much damage and dying.

When the last of the targets is down you switch to Logan who is manning a mini gun on a transport helicopter. Start engaging the foot mobiles on the ground and then jump through the window into the building. Finish off any stragglers that you missed with the mini guns and prepare to breach the door. This is a slow motion event, pick your shots and when it's all clear follow Hesh. Walk over to the control panel to trigger the missile launch.

Command confirms the missile has been launched and orders you to evacuate. Hesh and Logan refuse Merrick's order and decide to go after Rorke. You have just about 9 minutes to take him down before impact.

This is one of the final big pushes to the end of the game. Use all the tricks you've learned up to this point. Take advantage of the cover provided, throw your grenades and keep pushing forward. This mission is timed so don't allow yourself to be pinned down. Follow Hesh to the loading bay. Same as before fight your way through to get Rorke before he makes his escape. When the loading bay is clear sprint forward and jump on the train with Hesh.

You'll switch back to weapon system for the tank. You need to take out the anti air turrets. Push across the bridge and follow the tank squad. When you get close your objectives are marked on screen. Work your way around the complex, taking out any opposition and the turrets as you go. As you near the completion of your objective you'll take a hit, when you come to there is word all the turrets are down but there's just over one minute left until impact. Exit the tank and run for the objective. Climb aboard the other tank and take over the turret. As you exit the complex you get a view of the missile strike and destruction.