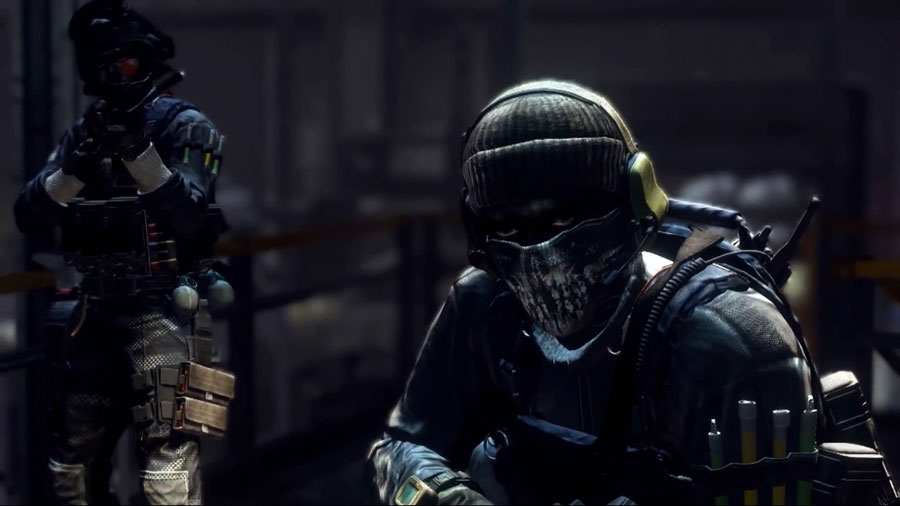 You begin with an extra long cut scene. Keegan is being sent to Colorado Springs where you'll rendezvous with him at 12:00 hours. As you wait for his arrival the squad is attacked. Elias, Merrick, Logan and Hesh are all taken prisoner by Rorke who starts to interrogate them. In an attempt to get Elias to reveal Keegan's location, Rorke shoots Logan. As he turns his attention to Elias, Logan tries to intervene and is knocked to the floor. Rorke then shoots Elias in the chest three times. Elias looks at Logan and tells him he's proud of him. Rorke comes over and kills Elias by shooting him in the head.

As the clock passes 12:00 hours it appears as if the Ghosts will be executed. Just as Hesh is about to be shot, Keegan starts dropping targets through the window with a high powered rifle. Grab the pistol and start dropping targets.

Head through the next door and clear the room. Go into the kitchen and hide in the side room as instructed. Don't engage targets, just wait for the patrol to pass. Follow your squad onto the balcony and wait for Keegan to kick off the engagement. Use the balcony walls for cover and eliminate the threats below. You don't have grenades so be sure to aim down sight and pick your shots. When their numbers start to dwindle head down the stairs and finish off any stragglers. Keep working your way down and through the building. Try to pass over enemy dead bodies for leftover grenades.

When the room is clear crawl under the gate. The team wonders where Riley is. As you breach the next door you're engaged from both the front and behind you. Just run and follow your squad, jumping out the window. You'll fall to the ground and lose consciousness. When you come to there's more Federation soldiers to take down on the outside. Riley starts things off by attacking a lone soldier but is shot and injured soon after. Grab Riley and carry him forward. When you encounter resistance set him down behind cover and take the enemy soldiers down. As things settle down your squad will tell you to grab Riley again. Keep repeating this process and moving forward. Board the helicopter to complete the mission.