HMV is doing something a bit mental as the launch day for Gears of War 3 draws night: it's selling the game for a mere £1.99. There's a catch though, of course, but not a massive one.

The catch, is you have to trade in UK's current number one title Dead Island in order to get the sweet £1.99 deal, and you have to do it before September 25. The retailer is also offering F1 2011 for

£3.99 when it releases on September 23 when you trade-in Gears of War 3, Dead Island or Resistance 3 before September 29.

Not to be outdone, GAME will also sell you Gears of War 3 for £4.99, which let's be honest, HMV's offer outdoes GAME by £3, when you trade-in Dead Island, Driver: San Francisco or Warhammer 40,000: Space Marine.

Also, you'll pay only £150 for the Gears-themed 360 if you trade in a 120GB Elite, and it will net you a digital download code for Crysis 2 on top of it (thanks, OrbitMonkey).

For those that do not wish to trade-in a perfectly good, working Xbox 360 for one with a snazzy paint job (we'll forget about the extra GB for a minute), Calibur11 may have the answer for you.

The firm announced today it's partnership with Epic to release an exclusive Gears of War 3 Vault - a high-end, interactive case for Xbox 360 Slim.

It features a Bleed-Out finish, controller cradle and an LED Crimson Omen that glows red every time a player is downed by an opponent. It offers airflow and stability, so as not to void your factory warranty on your Xbox 360 Slim.

It's rather cool looking, and will run you today £69.99 with an additional £17.99 asked should you wish to have the name plate customized.

Check it out online, and through the virtual poster below.

Gears 3 is out on September 20, and in case you missed it, Pat had a chat with Epic's Cliff Bleszinski and you can read it here. 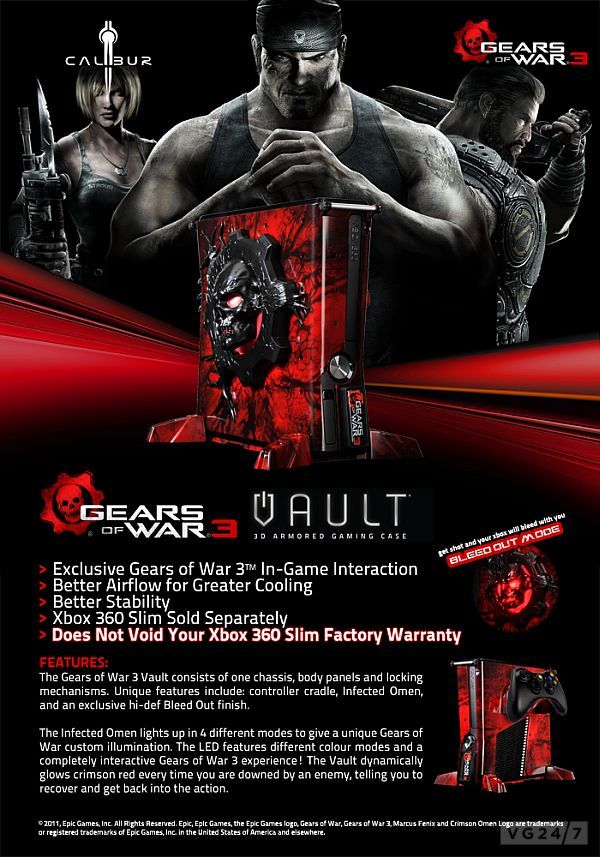