Captain Traunt is one of the toughest bosses to beat in Borderlands 3, so equip your most powerful shock weapon and grab a few pals before jumping in.

It goes without saying that it’s easier to defeat Captain Traunt if you’re playing in co-op with friends, but it’s possible to beat him playing solo.

He has a lot of shields to blast through and he can recharge them, making this fight quite lengthy. He also uses a tonne of elemental attacks that can cause a lot of damage over time, so make sure to pick up health from the adds that spawn around him. 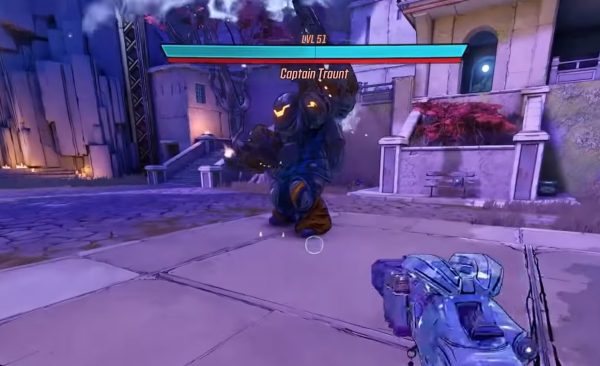 How to beat Captain Traunt

Your best bet is to aim for the large generator on his back or shoot him in the face to stun him. Shock damage weapons would be best to take down his shields, so make sure at least two of you have them equipped if playing in co-op.

Stay in cover and watch out for projectiles, as some will explode when you’re close by. Once his shields are down he actually loses health pretty quickly, so use the likes of sniper rifles, shotguns and assault rifles for maximum damage.

It would also be a good idea to keep some of the adds alive for as long as possible so you can get a second wind if you get a bit stuck.

Or, you could just lob a Porcelain Pipe Bomb at him and take him down in about three seconds, it’s up to you.

If you save at the checkpoint before this encounter, you’ll be able to farm him for better weapons quite easily, including the Storm Front grenade that will take his shields out in a flash.