The Broken Hearts event has kicked off in Borderlands 3, which means its time to assist Maurice.

You will be rewarded for completing Maurice's challenges during this new seasonal event and will shoot the floating hearts hovering around enemies.

As we previously told you, the hearts take several forms and break in different ways.

Maurice will keep track of how many hearts you've broken and mail you the following event rewards as you reach each of these totals:

The event ends on February 20. If you don't want to participate, you can opt-out from the main menu after pressing Play.

Alongside the event, Gearbox has deployed the latest patch and hotfix. 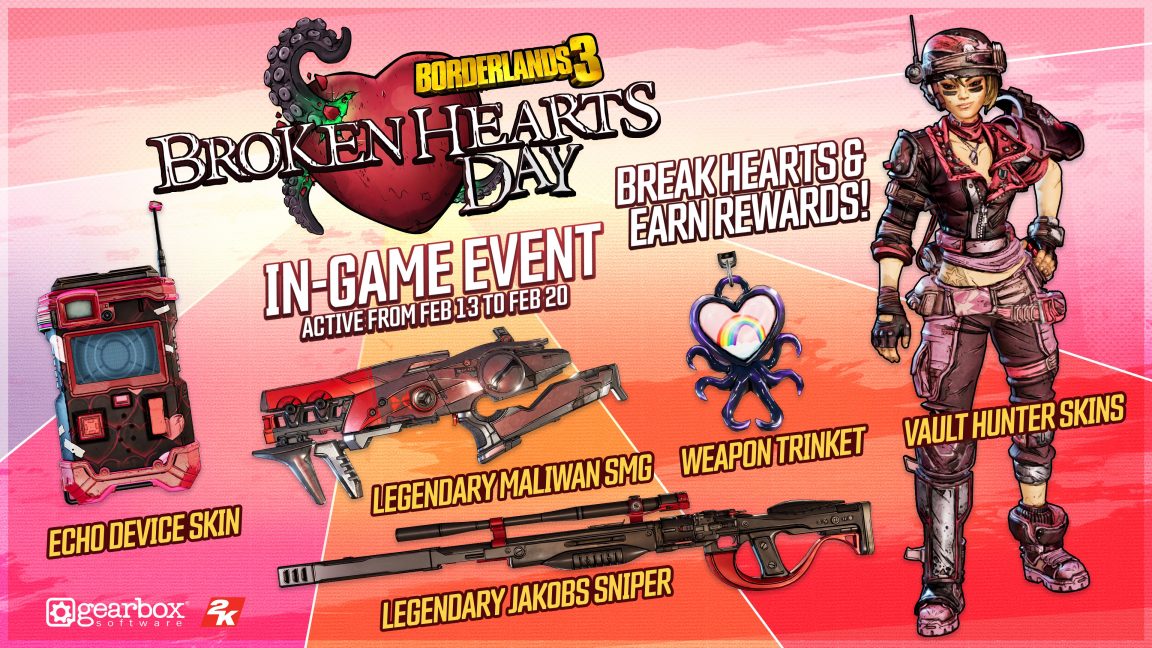 For the Vault Hunter who already has everything, or prefers their gameplay to be more straightforward, you can now disable the Broken Hearts Day Event in the main menu. This highly requested feature will be included for all future seasonal events as well.

With this patch, you can now skip all cutscenes in the game, whether you’ve seen the cutscene before or not, during solo play or by the host of your party during multiplayer! Simply press any key during the scene and you’ll be prompted to confirm the skip.

The level cap has been increased to 53, providing everyone with 3 more skill points to aim for! We are looking forward to seeing what interesting combinations the community finds with their additional skills and will have more to talk about in the future concerning level cap increases and character growth.

We’re introducing True Takedown Mode to the Takedown at the Maliwan Blacksite. As of this patch, there will be a way to re-enable the original version of the Takedown scaled to 4 players. Future Takedowns will also launch with both modes enabled.

The default setting keeps the Takedown scaled depending on how many people are in your party. To turn back on 4-player scaling, toggle the new switch to the right of the Takedown door.

You are now able to turn off individual Guardian Ranks or the whole system! If there are any perks that aren’t playing nice with your builds, you can now disable them! Furthermore, for those who want to enjoy a vanilla leveling experience, you have the ability to disable the entire system. This includes both stat bonuses and all perks. When the patch goes live this will be turned off by default.

With this patch, Stadia is now caught up to the other platforms! Stadia players can now access Moxxi’s Heist of The Handsome Jackpot, fight through Takedown at the Maliwan Blacksite, and take advantage of the QOL improvements that were included in previous patches.

We are continuing to work on additional stability and performance updates for future patches.