Borderlands 3: Bounty of Blood has several Crew Challenges to complete around the new map, and this time you're on the hunter for Creature Feature film reels.

You'll need to keep powering through Bounty of Blood's main storyline to find all of the Crew Challenges, so don't fret if you can't find everything right away. You're on the lookout for lost film reels for Katsuhiro Jones, who's intending to produce a film.

There are six Creature Feature film reels to find, so let's get started. You can check out where to find all the Good Prospects locations here. 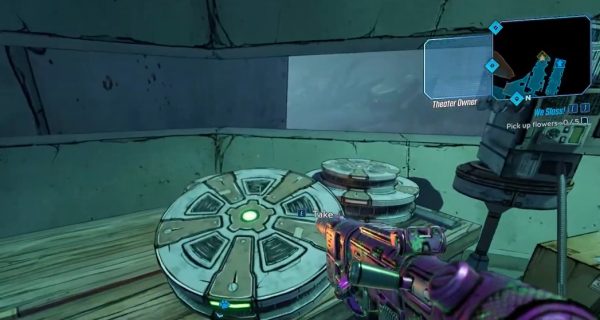 There are six film reels all in to find, with two found in the Blastplains. Your first port of call is the movie theatre in Vestige, where you'll need to speak to Katsuhiro Jones to get the quest started.

There's a film reel in Vestige to find, and it's quite obvious when you see it as it's a big wheel of film. You can find the Vestige film reel here:

There should be a narrow doorway to your left, so go through it and head down the stairs to find the reel.

Next up, head to the Obsidian Forest using the Crone's Contentment fast travel station. You're heading to an area in the North of the forest, and looking for a building with large, circular archways.

Head through the building to the cave at the back to find the film reel resting on some rocks.

For this film real, you'll want to head over to Bloodsun Canyon. The reel can be found in the Presentation Room middle of the map that you can access via a portal, which you can see the location of below. 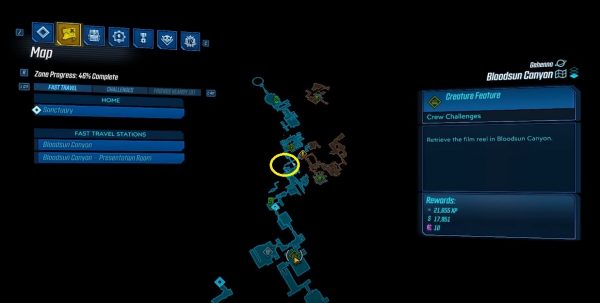 Go through the portal and you'll appear in the boardroom, where you'll be able to find the reel on the desk.

The next reel can be found in Ashfall Peaks, again roughly in the middle of the map. Again, you can head through a portal to find this location, which takes you out to a rooftop with two beds and a viewing screen. Otherwise, you'll want to head into one of the chalets and run upstairs.

You can find the portal in one of the chalets with a large water collection tub outside.

There are two reels to find in The Blastplains, the first of which is the Northwest of the map. Head into the Endless Horizons Mining Operation building stick to the right once inside. Climb up to the rooftops to the bridge above then cross over the walkway to the other side. When you reach the end of the bridge, turn left then head through the door to your right. At the back of the room, you'll find the first reel.

The second reel is much easier to find in an open area with lots of big floodlights around. You'll find it just to the right of the bell tower, resting on a table next to another reel that you can't interact with.

Once you're done, head back to the movie theatre in Vestige. You'll get to see the movie and Katsuhiro Jones will send you the Old Guitar Room Decoration, which you can see in your room on Sanctuary.

If you need more of a visual guide on how to complete this challenge, check out the video from WoW Quests below.

You can check out other new Legendary weapons in Borderlands 3: Bounty of Blood here.