With it launching for MoH owners and Origin pre-orders today before opening up to the public on Thursday, Johnny Cullen takes a look at the multiplayer beta for Battlefield 3. HD video and screens of the PS3 version included. 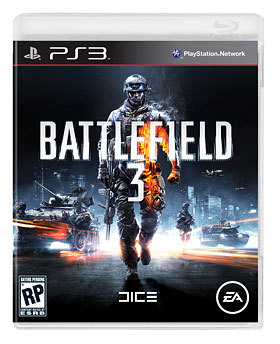 The beta goes open for all on Thursday.

Last week at Eurogamer Expo, for the first time, I got my hands on Battlefield 3. Playing the single-player Operation Guillotine on PS3, I was immediately impressed; it was was my game of the show.

But everyone, including EA and DICE, knows that multiplayer is the meat. Online play is Battlefield's main pillar, a fact which assured the fabled success of Battlefield 2 in 2005. Today we got to see what Battlefield 3's really about with the launch of its multiplayer beta.

Don't expect to see too much: you'll get one gameplay mode in the form of classic Battlefield mode Rush, where the attacking forces need to destroy M-Com stations from behind enemy lines whilst the other team tries to defend them before the opposition runs out of reinforcement tickets.

Basically, it's an all-out fight between the Yanks and Ruskies on Operation Métro, which takes place between a park and a near-destroyed subway station slap-bang in the middle of Paris. Before you begin a match, you get you standard Battlefield class selection windowand choose between Assault (some basics including M16/AK47M, M9/MP443, Medic Kit), Engineer (M4/AK74U, M9/MP443, RPG-7V2, Repair Tool) Support (RPK-74M, MP443, Ammo Box) and Recon (SVD, MP443, Radio Beacon). Once you've picked the class and load-out, you're away.

I've only had a couple of matches at the time of writing this, but what I've seen is definitely action-packed. The map is a staged affair, with you pushing forwards as a team in attack; when your objectives are completed you get given the go-ahead to move up. Before that, you're warned to stay back from the next area until you've destroyed the stations.

The action is intense. Novices will experience plenty of death. There's a lot of sniping going on, especially in the park area of the map, and if you don't keep your head down expect to lose it. The indoor firefights are fantastic: shooting from all sides, hilariously accomplished sound effects and crossed streams of bullets make for exhilarating play.

This is Battlefield, so it's a measured take on the soldier genre. You work as a team or you're dead, basically. The in-ear chatter is faultlessly immersive; you want to pull together to win.

It's a beta, so there are issues: I got kicked by EA's severs from my first match, although I'd assume this is a general issue rather than an isolated one.

I've only played the PS3 version as yet, so I can't give a comparison with other platforms. The beta went live for early birds on PS3, 360 and PC today.

After a sticky attempt at multiplay with last year's Medal of Honor, DICE is back on the Battlefield, where it belongs.