Games on a galactic scale usually take one of two flavours: the massive, procedurally generated planets of Elite Dangerous and No Man’s Sky; or snippets of worlds, the likes of which you see in Mass Effect and Star Wars: Knights of the Old Republic.

Beyond Good and Evil 2 sits somewhere in the middle. The planets you visit here - of which the developer tells me there will be “several” - are all the size of actual planets. You are free to circumnavigate them, fly down to the surface from space, walk around their massive cities, join the airways, fight, trade, complete quests, rob banks, and then zoom back into space before travelling to a new celestial body.

There is a touch of procedural generation, though many of the details on these planets are hand-crafted. Ubisoft wants each place you visit to have a distinct personality. During the hands-off demo, two developers play in co-op and explore the city of Ganesha - a single location on a continent called New India, which itself rests on the surface of a planet named Dios.

Dios has its own culture and lore. The planet is named after the Hindu word for ‘God’, because the locals believe it is blessed by divine protection. In reality, a nearby planet shields one half of Dios from an asteroid assault - the dark side of Dios is under constant barrage, while the cultural hub of New India thrives.

The demo begins in the bowels of Ganesha, in some forgotten temple beneath the city. The two characters are exploring some ruins when they come across a laboratory filled with bins stuffed with discarded clone body parts. Scientists and security guards oversee the experiments.

After scanning the goons with a spyglass, revealing their weaknesses, the names of the manufacturers of their equipment, and even employment status, the pair jump down and start kicking ass.

This is a very early build of the game, so combat isn’t quite there yet, but it essentially revolves around a shield, a melee weapon, and a gun, allowing you to seamlessly switch between the three. You also have a range of augments, which allow you to initiate special attacks as well as other abilities.

Once the enemies have been battered across the room, the developers take us outside to see the city of Ganesha proper. It’s an impressive place, filled with detail: flying vehicles speed through an invisible highway above, neon signs glow, smoke wisps through the air, and the city seems to stretch upwards forever. After letting us soak it all in, one of the characters hops onto a flying motorcycle, the other jumps into a fighter jet, and we’re speeding away from the bustle, mingling with the traffic, before aiming upwards and engaging in a dogfight in the skies above.

When the dust settles on the aerial battle, we’re shown the view from space. Seeing the developers stood on the roof of a ship, some holographic armour protecting his character from radiation, looking down on the city, you can’t help but be impressed by the scale of it all. Those buildings that were so tall a minute ago are now just an abstract shape on a sphere.

The thing is, scale is only good if it’s not all empty space. Each planet needs to be stuffed with things to do. And not just things - meaningful things. On this front, Ubisoft is confident it can deliver. Beyond Good and Evil 2 is not an aimless exploration game, I’m assured - it will have a structure and a story. Still, the demo left me a little worried about whether even Ubisoft - the studio that made a driving game featuring the entirety of the United States - could match its ambition.

Look at Dios for example: this is the planet the developer has chosen to show off to press. There will be “several” others. The thing is, Dios, the only planet that Ubisoft is confident showing off, is only really half a planet. Sure, you can explore the pockmarked, asteroid-battered side of Dios if you want, but it is a procedurally generated wasteland. Dios reminds me of the talented kid in art class who always scribbled in the backgrounds of their drawings. Ubisoft can’t take the same shortcut with the rest of the planets, so what will the solution be? Only the developer knows. 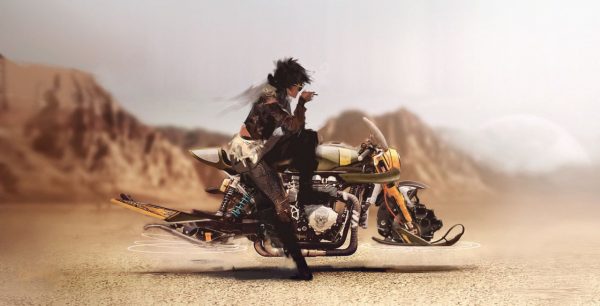 It is much the same for the studio’s partnership with HitRecord. Ubisoft says the reasoning behind this collaboration - which asks for the community to create art and music assets for the game - is because it wants a good cultural mix of influences. The cynic in me thinks it’s because the game will never be finished if the community doesn’t help it along.

Even in the short demo, you can see other little shortcuts that were likely made to keep the game within budget, too. In the story, for example, this star system was colonised by a single ship, but the colonists were struck with radiation poisoning on the journey and became infertile. To ensure the mission was a success, they cloned themselves. This explains why everyone you meet - both other players or NPCs - are a slight variation on the same handful of base character models.

This isn’t a criticism, of course. Developers use these kinds of tricks all the time to efficiently develop a game, but you do have to wonder if Ubisoft is trying to snatch the moon’s reflection from a lake with its ambitions. However it turns out, though, there’s no denying Beyond Good and Evil 2 was one of the highlights of E3. It’s interesting, different to anything I’ve seen before, and ridiculously ambitious. I really hope the developer pulls it off when it launches in approximately three decades.