You are now all able to go hands-on with Battlefield 5, thanks to the current beta test.

The Battlefield 5's anticipated beta is well underway, and you can take part easily enough. The beta differs from previous closed alpha tests in several ways, which we will outline below. We've been playing the Battlefield 5 beta, and although we've come away impressed, we do have a few issues with it.

When does the Battlefield 5 beta start?

The Battlefield 5 beta test is split over two phases, but both are taking place on PC, PS4, and Xbox One. The first phase is available only to players who pre-ordered the game.

This early access stage kicked off Tuesday, September 4 on all platforms. Now, as of Thursday, September 6, the beta has opened up for everyone else.

For start and end times in regions other than Europe and North America, click the link in the respective section.

How to play Battlefield 5 beta

Like we mentioned earlier, the Battlefield 5 open beta is available to all players. If you want to get in two days early, however, you have a couple of options. Assuming you don't get a free early access code (these are sometimes distributed), the most straight forward way of playing early is pre-ordering Battlefield 5.

If you pre-order at retail, your receipt should have a beta key you can enter on PSN, Xbox Live, or Origin. If you didn't get a PSN/XBL code directly, your code will need to be redeemed on Origin.com. You'll need to create an account (if you don't have one) and link your console account of choice to it.

If it was a digital pre-order, you will be able to grab the beta client as soon as it's available without needing to do anything extra.

Can you pre-load the Battlefield 5 beta?

Do keep in mind, however, that sometimes PS4, and Xbox One stores take longer to update and put the beta page live, so don't fret if you don't see it the very second it goes live.

For pre-load start times in regions other than Europe and North America, click the link the respective link. You can also refer to the store pages below for easier access.

How big is the Battlefield 5 beta?

The Battlefield 5 beta client will be around 15GB on consoles and 12.44GB on PC, which is higher than the closed alpha's 10GB. This is probably because the beta has more playable content (more on that below) compared to the alpha.

Xbox One players will need an internet connection and an Xbox Live Gold account to play the Battlefield 5 Open Beta.

For PlayStation 4, all owners connected to the internet can get in on the action. In other words, no PS Plus required. 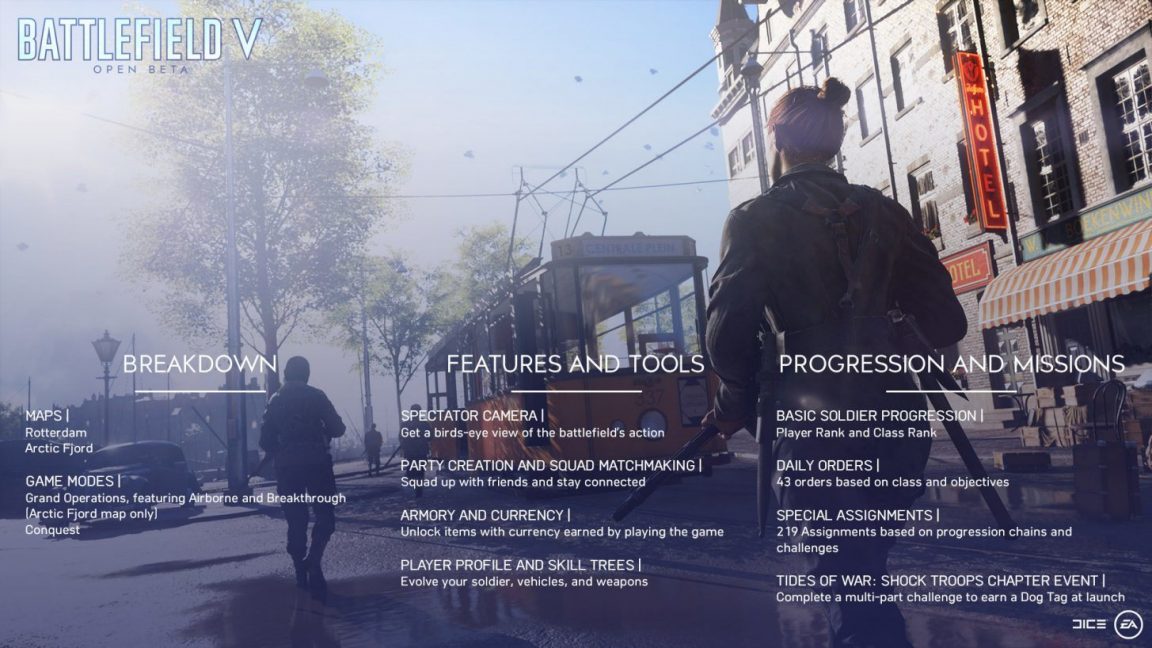 What kind of content will the Battlefield 5 beta have?

The first day will see players airdropping in at night to destroy AA guns. Based on their performance in Airborne, the number of spawn tickets available on the next day will change. The second stage is a Breakthrough fight in daylight.

Conquest is a 64-player fight where two teams fight for control over key flags on the map. Classic rules return, which means holding the majority of flags is the best way to drain the opposing team's tickets.

Tides of War, Battlefield 5's ever-evolving meta narrative and live service component, will also be present in the beta. This short preview will consist of a five-part chapter called Shock Troops.

What are the Battlefield 5 open beta's PC specs?

DICE provided an updated list of PC specs for the Battlefield 5 beta. Those who played the closed alpha will find the specs to be relatively similar.

Does progress in the Battlefield 5 beta carry over to the launch version?

No, all player progression will be wiped at the end of the beta. However, your progress will carry over from the early beta to the open beta, since it's the same version.

Do I get any rewards for taking part in the Battlefield 5 beta?

If you manage to complete all challenges in the Shock Troops Chapter Event before September 9, you'll receive the Tides of War Beta dog tag at launch.