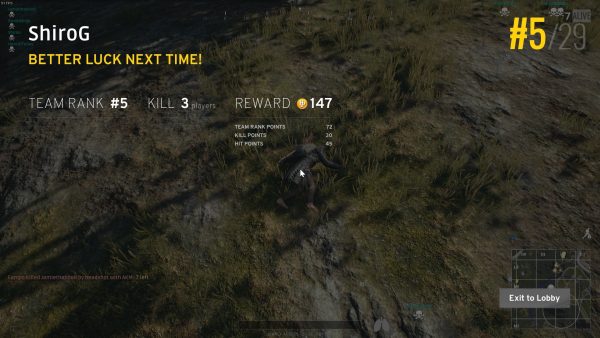 You’ve no doubt heard the words “battle royale” in one context or another over the past six months. I have, but I always associated it with clunky and boring survival games; the kind that flies the Perpetual Early Access banner with pride.

Every player is constantly both the hunter and the hunted. It’s an exhilarating experience that works unbelievably well, in spite of the unfinished nature of the games themselves.

I didn't look at it any closer until I bought PlayerUnknown’s Battlegrounds on a whim recently, and realised that a lot of my preconceptions weren’t entirely accurate. The genre gained prominence in DayZ – a Perpetual Early Access survival game - before later finding its way into H1Z1. The mode got so big in H1Z1 it eclipsed player numbers of the core survival game, and Daybreak eventually made it into its own game, King of the Kill.

So yes, this unflattering association is true, but what I did not expect was that the nascent genre is removed enough from the trite survival tropes it grew from that it’s well worth paying attention to for its own merits.

The circle of life

If you’re unfamiliar, battle royale is a last-man-standing game mode where players are dropped into a massive map and asked to scavenge for weapons and gear to get the upper hand, or simply fend off potential attackers until there’s only one left standing. There are no zombies here, only other players. Everyone is ferociously hunting for weapons, ammo, armour - anything and everything to improve their chances of success, of surviving the hunt.

You can’t ever stay in one spot for long, because the playable area shrinks every two or three minutes, which does exactly what you think it does: forcing players to continue moving closer to the centre. There are other hazards, too, though all have the same aim of preventing things from getting stale.

Rounds typically last from five (if you get killed early on), to around 35 minutes if you make it to the end game. Dying may seem like a penalty, but it really isn’t. Sure, it can be frustrating to lose what you worked for because of one bad move, but you get into another round so quickly it doesn’t really matter.

Most variables in this genre are randomised, you never know where you’re going to land – though you can choose the general area, and you’re never sure if and when you’re going to find the gear you need.

Every player is constantly both the hunter and the hunted, almost always looking for better gear and weapons than what they currently have. It’s an exhilarating experience that works unbelievably well in practice, and in spite of the unfinished nature of the games themselves. So long as you can forgive some poor rounds here and there, you’ll almost always find yourself queuing up for another one immediately.

Though the basic rules are very similar, the execution in both King of the Kill, and Battlegrounds is very different.

King of the Kill’s arcade gunplay and more inviting UI makes it perfect for the types of players that love to run and gun. There’s always plenty of good gear everywhere in that game, so it becomes more a test of reaction times than a desperate hunt for the good stuff.

Battlegrounds falls on the opposite end of the spectrum with unforgiving, Arma-lite mechanics. You die in a few hits, or one headshot from most weapons. A shot you hear whiz by you while you’re running across an open field is guaranteed to get your heart racing as you frantically try to locate the shooter while also looking for cover.

Being on edge is both a blessing and a curse. It’s survival horror where other players are the bogeymen.

No amount of words, GIFs, or videos can capture the feeling of knowing someone is in a building watching out for you as you are for them, as the both of you scan the area hoping to be the first to spot the other so you can get the kill and move on before you’re caught outside the circle.

Nothing will convey how sweaty your palms will get when you realise you’re among the last five or so players left in the final circle where everyone is likely fully decked out and out to get you. The feeling you get when you snatch that win or even get close is not unlike the ecstasy you feel when you barely manage to finish off a tough Dark Souls boss.

I got so tense a few times my aim suffered for it. Being on edge is both a blessing and a curse. It’s survival horror where other players are the bogeymen. That’s how demanding and rewarding it is. I’ve yet to be the last man standing, but I came close, and oh boy is it a good feeling to even be in the top five.

Oblivious to each other's presence

Shooter fans of all kinds need to experience this loose, non-linear experience, where you’re not scanning the usual corners or camping spots for enemies and where every encounter is as exciting as the first. But, because these games are exclusively Early Access for now, they are clunky and generally rough around the edges. That’s true for both King of the Kill and Battlegrounds, which means there’s a lot of room for improvement.

Shooter fans of all kinds need to experience this loose, non-linear experience, where every encounter is as exciting as the first.

What I mean by this is that someone else needs to step in the ring, a publisher with money and capable development teams that can make a better game. It doesn’t even have to be a complete new game, though I have to assume at least one other development team somewhere is looking at those Steam numbers and thinking they want in on that.

The most obvious example that immediately comes to mind is Ubisoft, particularly with Ghost Recon: Wildlands. The game’s map is massive, easily big enough to support a couple of Battlegrounds-style sprawling environments that suit this genre well.

It’s also an already somewhat clunky game (read: tactical) that’s not interested in ultra-responsive controls and offers a decent enough shooting experience that works in both first and third-person – another battle royale staple.

The collection of weapons, attachments, and gadgets already available in Wildlands is well beyond what these games offer, which is itself and advantage. All Ubisoft needs to do is scatter the weapons around the map, and figure out a way to get a 100 or so players in a server. Admittedly, getting that number of players on one server and guaranteeing things to go smoothly is not exactly something Ubisoft is known for.

A bad time to fumble with the controls

Another reason Ubisoft could be the first AAA publisher to make a battle royale game is that it’s sort of already tried this with The Division’s Survival expansion, though obviously at a much smaller scale and with more of a focus on, well, survival, rather than domination through combat.

The French multi-studio company is also among the few with deep pockets who have no problem greenlighting experimental new IPs like Grow Home, or investing in risky innovative titles like For Honor. From a budget perspective, a battle royale game doesn’t include that many unique assets. A polished, AAA product could easily sell for $30 or $40.

Whoever decides to take up the mantle has a golden opportunity to create if not a competing product then perhaps an entirely different take on the genre. More importantly, there’s the massive, untapped console market that will eat up the first battle royale game it gets, regardless of how good it is.

I suspect this will happen eventually; there’s a reason new MOBAs are still being made even though their makers know no one will play them. Until that happens though, Battlegrounds is one game you absolutely need to try.