Batman: Arkham Origins came out last week, but the more VG247's Dave Cook sleeps on it, the more he's made peace with accusations that it simply copies Rocksteady's predecessors. Here's why. 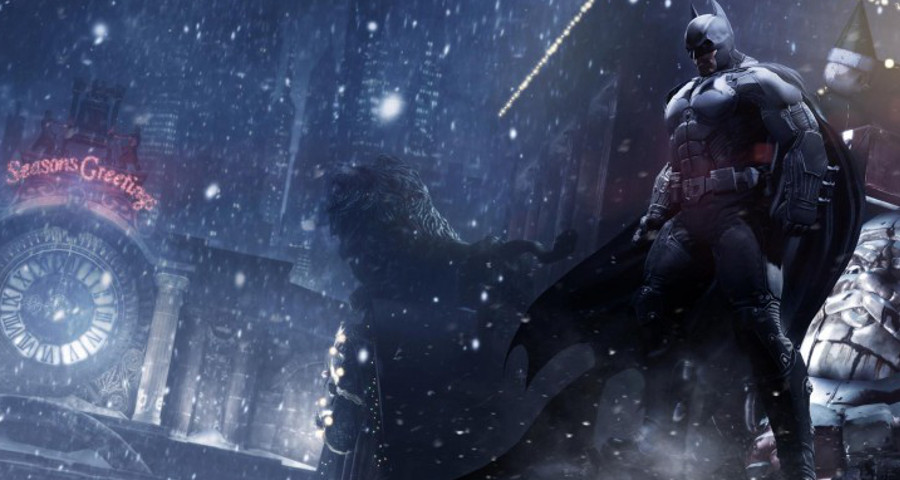 Watch me play the first ten minutes of the game on PS3 here. There's spoilers in there, naturally.

Warner Montreal said it was worried it had bitten off too much with this game, which is relevant to this article.

You can watch the Batman: Arkham Origins launch trailer here.

There's a pretty funny scene in Kevin Smith's comedy flick Jay & Silent Bob strike Back where Jason Lee's comic artist Banky Edwards gets grilled by Chris Rock's aggressive movie producer Chaka Luther King. The set-up sees Rock destroying Lee for simply being a comic inker - or as he calls it - a 'tracer.' He makes out as if going around the lines and simply outline other people's work is something to be mocked, This entire conversation is entirely applicable to Batman: Arkham Origins.

When reviews of the game dropped last Friday, there was a general feeling that Warner Montreal had played things a little too safe. Several critics noted that there wasn't enough deviation from Arkham City's open world format and that there was an overbearing sense of familiarity about how Batman himself handled. I agree, but where I feel my opinion and those of the harsher critics split is in how this is seen as entirely negative.

I never envied Warner's new outfit when Rocksteady handed it the keys to the Arkham-verse trilogy. After all, here was a series of games that had belied the idea that all licensed adaptations were inferior products. In Arkham Asylum, the UK team had proven that with care and talent, juggernaut IP like Batman could exist in the games industry with style and grace. The 'Metroidvania' template gave rise to a claustrophobic setting and progression mechanic that enraptured many reviewers and gamers alike. It was a resounding success.

Batman: Arkham City built on that foundation the only way many pundits thought it could - by going open world. Several VG247 readers have stated that they felt the expansive nature of the sequel was perhaps its weakest hand, and I absolutely understand where they're coming from. At times it felt as if the locked-down city - as immersing and brimming with character as it was - removed the sense of constrictive dread present in the original. Regardless, it was still a cracking adaptation of DC's source material, no matter how you cut it.

But then there's Batman: Arkham Origins. This is a big project for any new team to cut its teeth on, so I absolutely understand why some areas have been crafted in a conservative manner. The premise sees the Dark Knight venturing out of the Bat Cave on Christmas Eve to apprehend notorious gangster Black Mask, much to the dismay of his long-suffering aide Alfred. The hoodlum has placed a $50 million bounty on Batman's head, which has drawn eight ruthless assassins to Gotham. 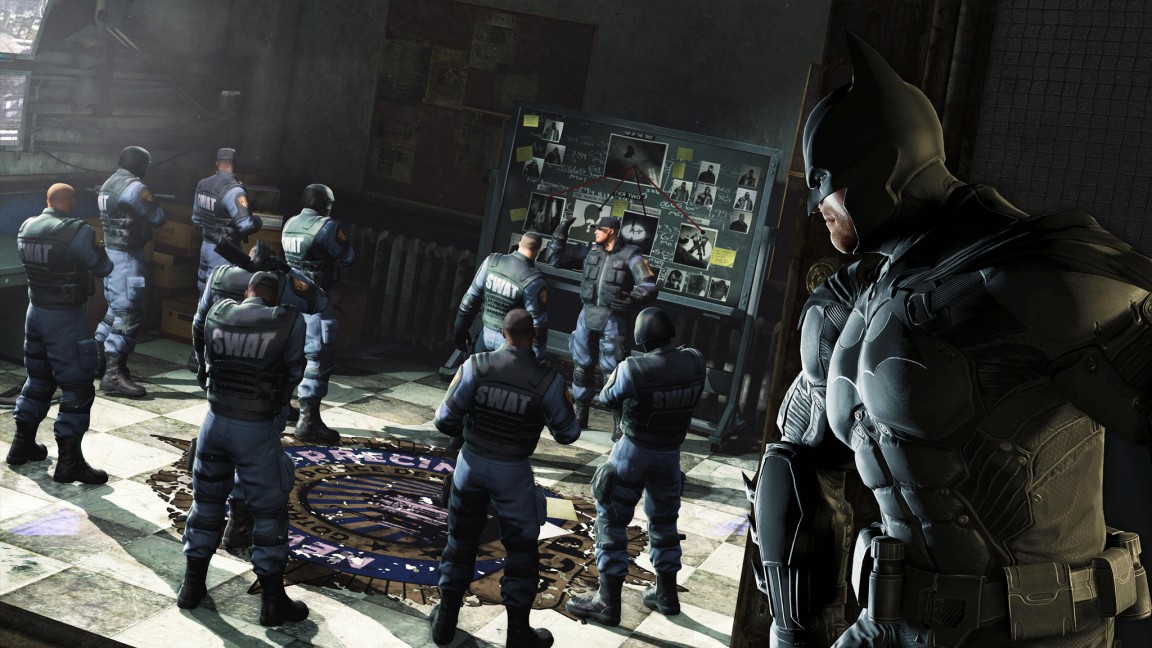 That's the base plot which sees a younger, more aggressive Batman hit the streets in search of faces to punch and cops to evade. He's more of a loose canon, but no less skilled than when we left him at the end of Arkham City. This grittier tone really suits DC's canon, and if anything takes the series full circle to the menacing vibe of the first game. It's a stylistic choice that absolutely benefits the project in the majority, but it does result in the open world environment of Gotham feeling a tad underwhelming.

Gotham's aesthetic aside, traversal by zip-line and gliding is still great fun and there's no ends of goons to engage in a quick brawl for XP. You're never too far from some kind of distraction from the core questline, which itself encourages perseverance, even through some muddied plot points. The combat mechanic still has that balletic beat to it that sees you paneling crooks with deft strikes and gadget takedowns. There's even a few new enemy types in there to add some new layers of challenge.

The foundations are all present and correct, but a lot of content that should have been additive actually detracts from the overall experience. You've got a wealth of Enimga collectibles in there - think the Riddler challenges before he donned his green persona - and they simply feel included by obligation, rather than used as a method of spicing up the campaign. You can also scour the rain-swept streets for Penguin's weapon caches, and bombs set by Anarky. They're distractions verging on the same degree of banality as the flags in Assassin's Creed.

There's also a lot of rough edges and questionable design choices throughout the campaign that reveal Warner Montreal's baby-step approach to tackling the project. Again, I don't blame them for this, and I'll explain why in a moment, but I have to point out that several key boss battles really do fall flat here. One QTE-heavy scrap with oft-touted villain Deathstroke is a major let-down, while grapples with Copperhead and Deadshot boil down to slightly harder versions of melee fights and 'Predator' challenge rooms respectively. There are scarcely any new mechanics or tricks present in these encounters, and that can prove quite deflating at times. 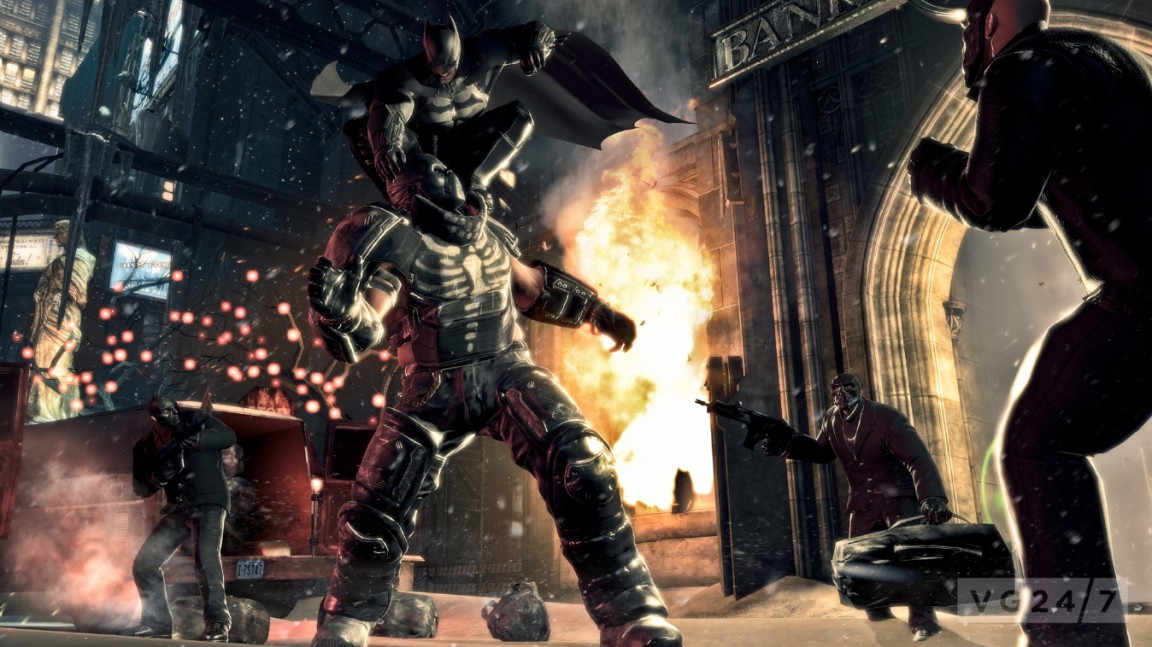 So why is all of this justifiable in my book? Well, just look at the legacy Warner Montreal had to follow. If you're a fan of the first two games then there's every chance that you might be perfectly happy with another entirely acceptable entry to the series that doesn't deviate too far from the mould. That's personally all I actually wanted from Origins, so to see a new team capture the essence of Rocksteady's work and add a new, darker origin tale on top can't keep me feeling negative for long.

I'm happy to play this game knowing that I'll brush shoulders with the same functional mechanics and attractions I enjoyed before. So imagine my surprise when I found that Warner Montreal had actually tried to add more depth to Batman's crime scene investigation moments? This time, there's a greater emphasis on solving the puzzle of crime-scenes and re-creating events to identify the culprit.

Sure, Batman's monologues practically steer you to the solution every step of the way, but it's still nice to see his detective skills given a little more weight. New gadgets like Deathstroke's Remote Claw, the goon-disorientating Concussion Detonator and the Electrocutioner's electrified gauntlets are hardly earth-shattering, but they work. In fact, everything works, and that's surely got to be worth some kind of relief given everything that was riding on this title?

If I were someone working at Warner Montreal right now I'd be damn proud of Batman: Arkham Origins. It may not improve on Rocksteady's previous work, but it can quite happily co-exist alongside two of the greatest licensed adaptations the games industry has known. With that in mind I think that simply calling the studio's talent 'tracers' - in different words - is to do them a grave disservice.

After all, the game could have been much, much worse and as a first start it still surpasses many games out there from established teams. I'll be looking on with keen interest to see what the studio announces next.

Disclosure: to assist in writing this article, Warner Bros. sent Dave a copy of Batman: Arkham Origins on PS3.