Athkatla’s entrance gates, with their Byzantium Tourelles and crumbling sandy brickwork, are likely one of the last parts of the city you’ll see. You don’t enter Athkatla - the capital city of Amn and the setting for much of the first third of Baldur’s Gate 2 - through a gate, but in a cataclysm of magical energy that collapses a large section of the city’s shopping promenade.

By the time you see the gates, you’ve already had your half-sister Imoen imprisoned by a council of mages. You may or may not have already chosen a side in a war between assassins and vampires, made your first steps towards acquiring armour made of human flesh, and started collecting body parts for a talking skull.

Twenty years on, Athkatla is still one of the densest cities you’ll find in a CRPG. There’s something like 35 quests in total, which is about the same as the Witcher 3’s Novigrad, but spread over the city’s eight districts in such a way you’re never more than an NPC or two - most of whom have some sort of unique dialogue - from finding another.

One of Athkatla’s most effective Djinni tricks for maintaining its two decade old illusion of a living city is how its politics and laws directly encroach on the player’s own freedoms. You may be tempted, after watching the Cowled Wizards imprison Imoen and Irenicus for illegal magic use, to try out some magic of your own. Try it once, and a wizard will teleport in and tell you to knock it the fuck off. Keep trying it, and a few of them will appear and start trying to incinerate you with high-level spells. 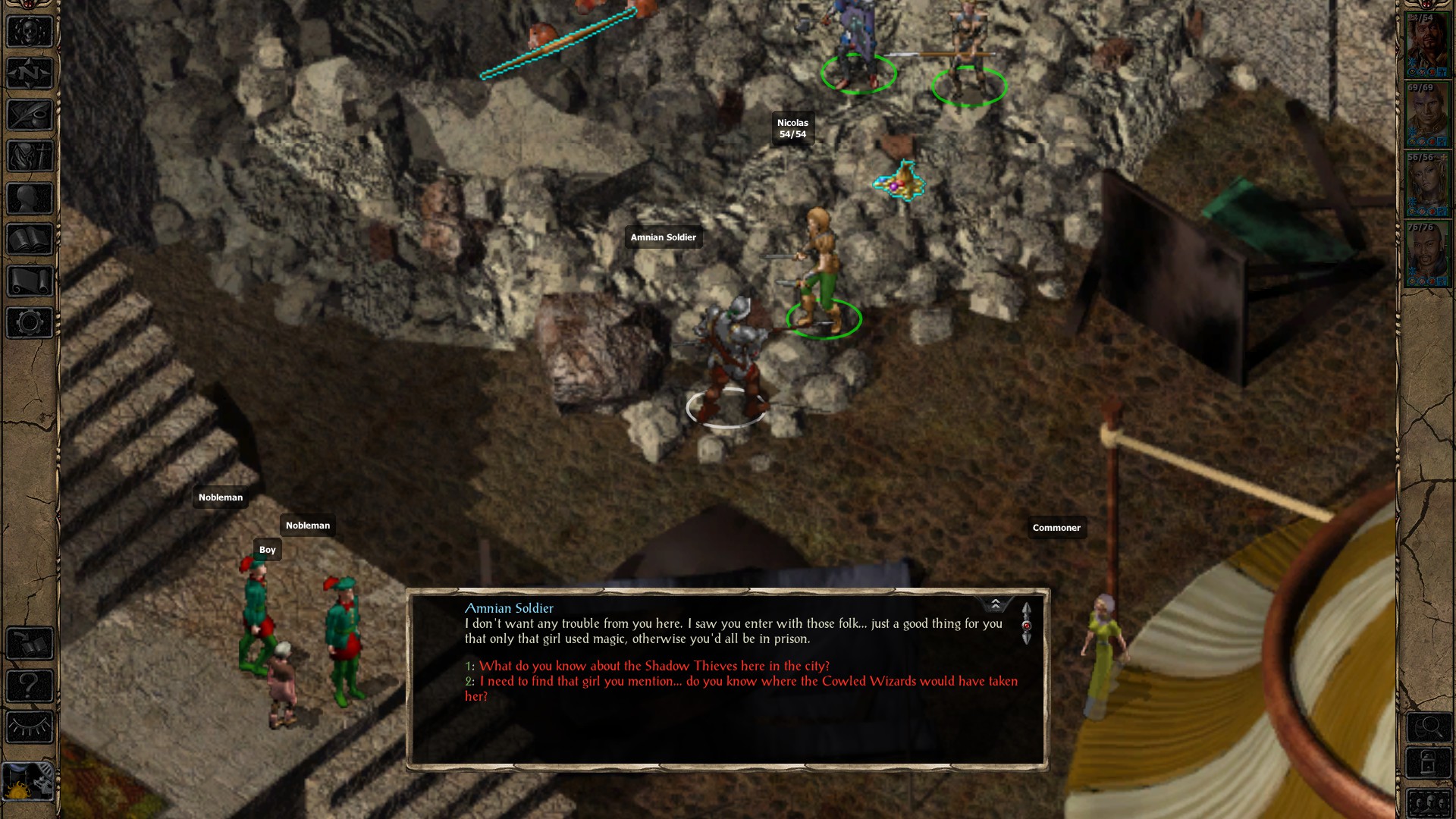 You can spend 5000 gold on a magic license, and the 5k isn’t too hard to come by, but just the act of forcing the player to buy their way out of the city’s byzantine governance goes a long way in effectively conveying the weight of Athkatla bureaucracy. If you’re used to a consequence-free open world, it’s an effective way to set a mood. Throw in the guards that wake you up and call you a vagrant if you try to sleep in the streets instead of an inn, the spontaneous fights that break out in the street between Shadow Thieves and Vampires, and every idiot in the city trying to mug your party of powerful wizards with minus one short swords of misplaced confidence, and the place starts to feel a lot less static than it otherwise could.

It’s become a bit of a cliche to point out the dissonance in open world games that set up an apocalyptic scenario before letting you go piss around with a fishing rod for forty hours while the local villages burn, but this is partly because it happens a lot. BioWare’s solution here was to have a representative of Athkatla’s thieves guild, Gaelan Bayle, ask you to gather up 20,000 gold pieces before he’d help you free Imoen from Spellhold. The whole second chapter of the game is based around collecting this money, and it’s a great narrative trick to get around the loss of urgency. Each side quest, no matter how small, is working towards the main plot goal.

Athkatla is also called the City of Coin, as a consequence of its thriving commercial economy relative to the rest of Faerûn. Our companion Jaheira tells us this just as we arrive, and it’s the first - though by no means last - hint of a fourth wall break. A sort of meta nod at BG2’s awareness of itself as an RPG. It’s hard to walk a few feet in Athkatla without bumping into someone with a problem that needs solving, and the coin to pay for it. Or, if you’re so inclined, a distracted noble with a bulging purse. When Bayle sets us on our task for the gold, the city willingly reshapes itself as rows on rows of arabesque sofas to dive behind for change, or pockets to pick for jewels. When Jaheira tells you the city’s moniker, she may as well be telling you that Athkatla is the city of quests, such is the place designed as a freeform playground centred around a structured quest goal. 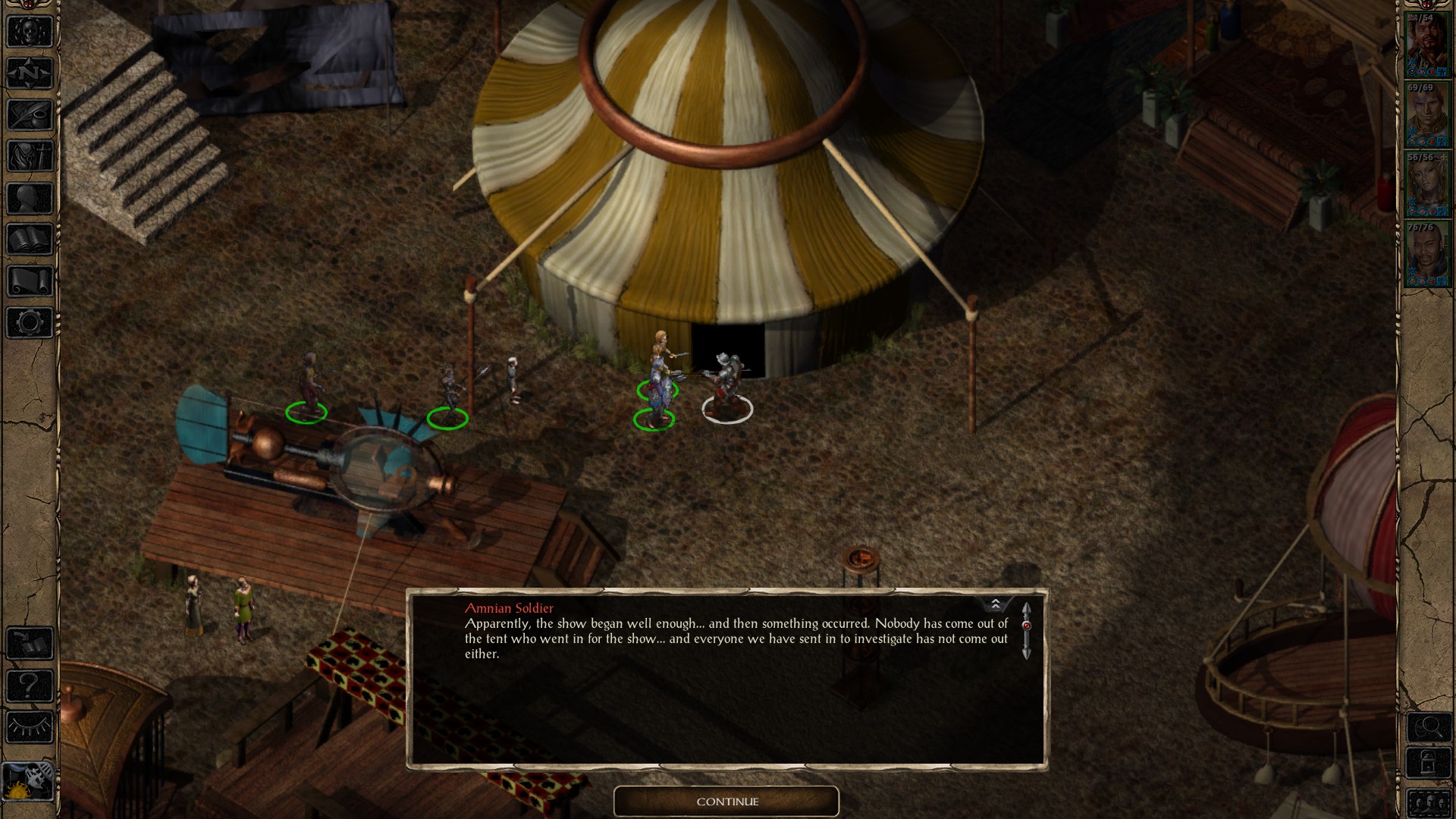 Faithful to the point of impenetrability as the game is to 2nd Edition D&D rules, its most accurate homage to tabletop is how ad-libbed so much of the questing that takes place in Athkatla feels. A major goal of CRPGs has always been to offer a convincing, satisfying simulation of a DM within the constraints of the technology and budget. You can’t offer the player the infinite choices they’d have sat around a table, but you can write responses to roughly correspond with alignments, and maybe throw in a couple of wild cards. This is all there, and some quests can play out considerably differently. But the real harmony with its tabletop counterpart is how, on a first playthrough, the game can often feel like it’s spinning yarns, threads, and entire tapestries in response to a player’s curiosity.

So the DM casually mentions a circus tent in a shopping promenade, only ever intended as a minor detail to bring colour to the scene, but the players won’t let it go. An hour or so later, the party has emerged from the tent, having rescued a winged elf from an illusory palace created by a bitter circus employee. Similarly labyrinthine is the Copper Coronet tavern, which hides fighting pits and slaving operations behind a side door, suspicious only for a single guard. If, like me, you judge RPGs on how many evil dwarfs they feature, then the Copper Coronet has two. One of which you can recruit to your party - yes, Baldur’s Gate lets you have Chaotic Evil companions - the other you can kill to retrieve a teddy bear for the ghost of a murdered child you meet floating around the city graveyard. 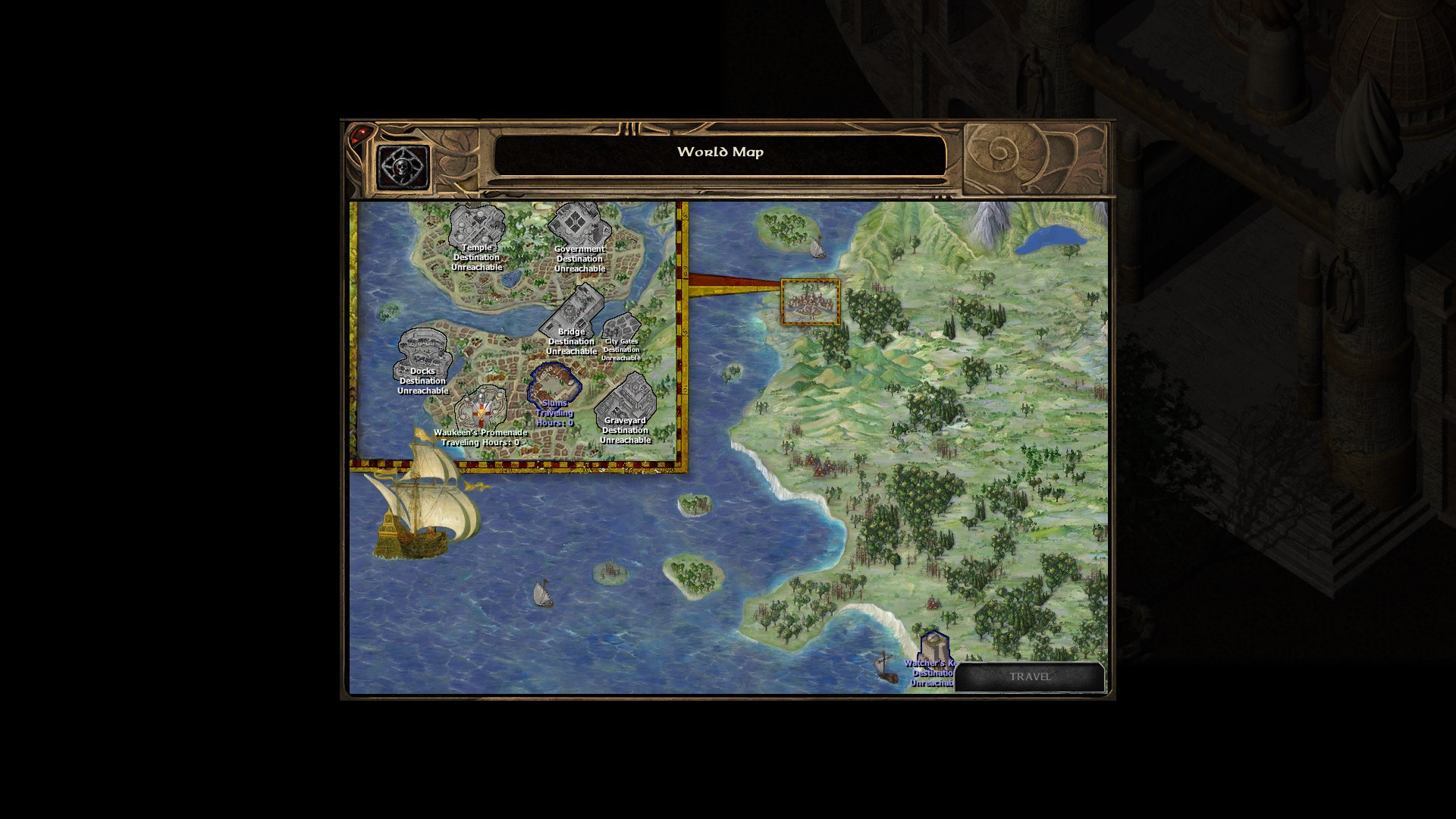 Planescape: Torment’s Sigil was also known as the City of Doors for the way it connected the Planes together, but it’s as fitting a name for Athkatla, I think. From the Planar Sphere that appears in the slums above an elderly woman’s house, to the talking sword you find in the sewers underneath the Copper Coronet, Athkatla can feel as much like a blur of spectral anomalies as a Matryoshka Doll of spontaneous sidequests.

For all its comedy, there’s a seediness to the city that makes it, on reflection, one of BioWare’s darker settings. The first tavern you find, on the upper levels of the promenade, is filled with nobility. A miner in the corner, recently struck lucky with a gold seam, explains how the city’s upper classes treat anyone lesser like dirt. The first noble you speak to tries to buy your companion Jaheira for sex. Later, another tavern patron tries to buy your companion Minsc’s hamster, Boo, for eating. The slave operation in the back of the Copper Coronet leads to another quest chain. Search hard enough, and everything in The City of Coin is for sale.

If Athkatla set the standard for dense, open environments in CRPGs, it’s also where a lot of tricks that would become BioWare staples found their first iteration. Spontaneous conversations between party members, and romances that responded not just to how you treated your companions, but how you acted towards the world. The fifteen companions in Baldur’s Gate 2 meant that all but a few could have lower tolerances for the player’s bullshit, leaving the party for good if you made too many alignment choices they weren’t happy with. Athkatla, with its training wheels structure and taverns full of recruitable party members, was a great way for the player to test drive their own chosen moral compass for that playthrough. 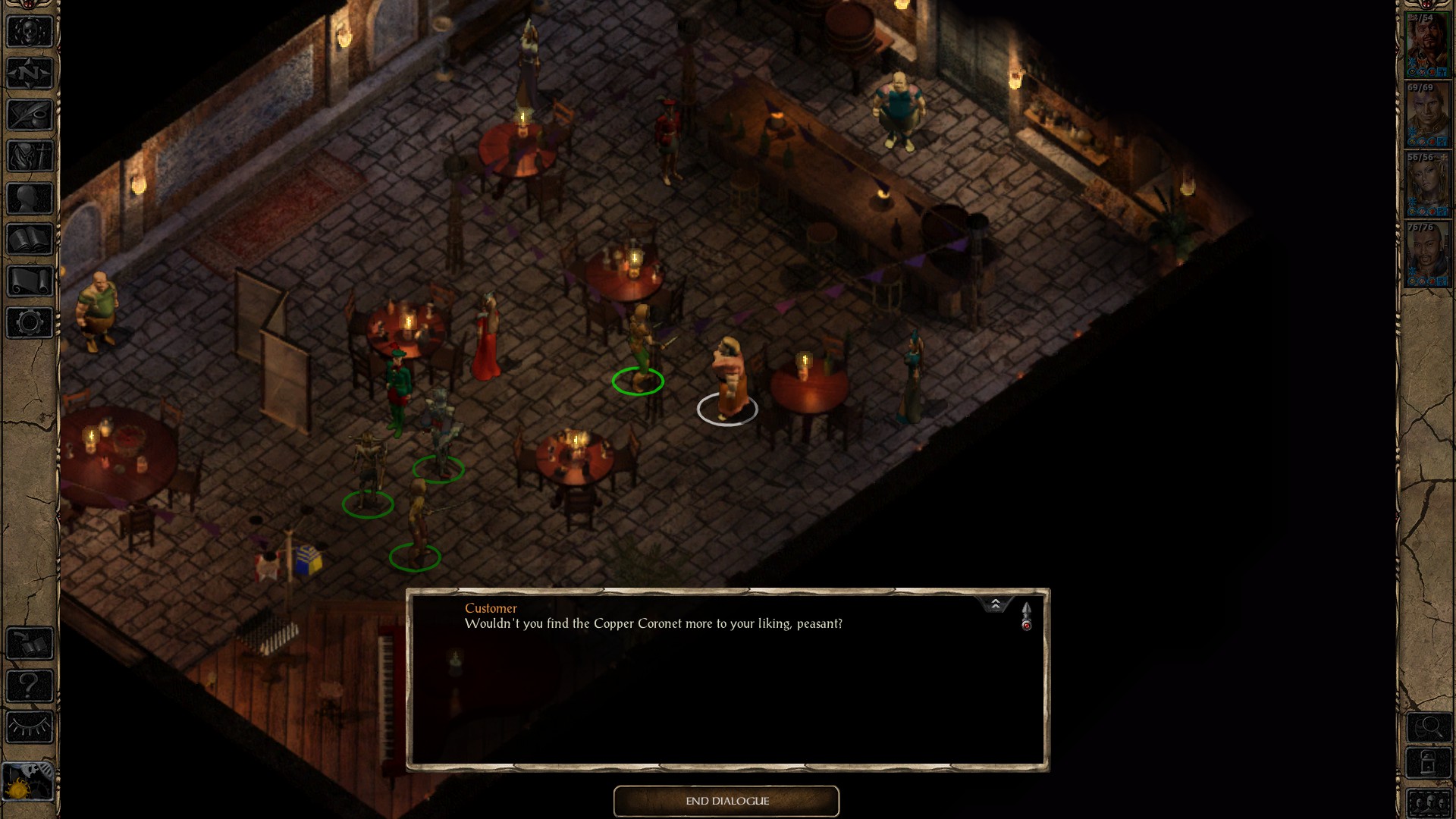 Perhaps best of all, Athkatla pulled off one of my favourite tricks in sprawling RPGs: letting you return to areas you’d already been to later in the game, with a much more powerful party, just to give you a powerful sense of how much you’d grown. Follow the sewers beneath the Copper Coronet far enough, and you’ll find an underground lair full of mindflayers. These Illithids are terrifying, even at higher levels, and Larian’s choice to feature them so heavily in the marketing and set-up for Baldur’s Gate 3 leads back, I think, to what a high point these encounters were in the prequel. Along with Kangaxx the Lich, a bastard hard fight that BioWare paid homage to in the original Dragon Age with the cleverly named demon Gaxkang, these mindflayers were effectively one of BG2’s superbosses.

For all the discussion of combat styles and setting around the upcoming sequel, all a Baldur’s Gate game ever needs to do to be worthy of its named legacy is to transport the player to somewhere else. Athkatla’s sprawling nature never felt like content for content’s sake, more the masterwork of a team dead set on creating the illusion of a living city, by having so much to do that it felt like a constant journey of discovery. Having a new team take the reins of the franchise for Baldur’s Gate 3 may seem like a gamble, but given Larian’s track record, I couldn’t be more excited to roll the dice again.