It doesn't happen that often, but some times an assignment crops up that's a true out of left-field thing. Atlas Reactor is one such instance of this: I signed up to cover it without really knowing what it was. There's something refreshing about that; it's pure. I haven't seen it at eight different trade shows and I can just sit down and play it.

Here's the main thing you need to know about Atlas Reactor; It's a turn-based strategy game with a competitive multiplayer twist. Think the rebooted XCOM, which I love, but as a multiplayer-focused game.

There's the XCOM influence with checkerboard-based movement and strategy tactics, but that's then combined with a League of Legends, DOTA or Overwatch-style focus on a cast of very distinct heroes, all of which slot into very familiar categories of DPS, Tanks and Support.

"Atlas Reactor is almost entirely about planning, decision making and predicting what your opponent does. A comparison to chess would be fairly appropriate."

All the trappings you'd expect of a game like this come with character selection - there's skins, taunts and the like, but also a variety of abilities and mods that can be stacked up into a specific load-out. This smacks of a MOBA, but all takes place before you even hit a match rather than taking place mid-match.

When a match kicks off, each player picks a freelancer (this game's term for their heroes) of their own and players then enter into a team-based match of up to six players per side. Once you're in the match, things play out in an XCOM-style fashion, with players moving across the grid-based map in order to gain superior positions and take the enemy out. 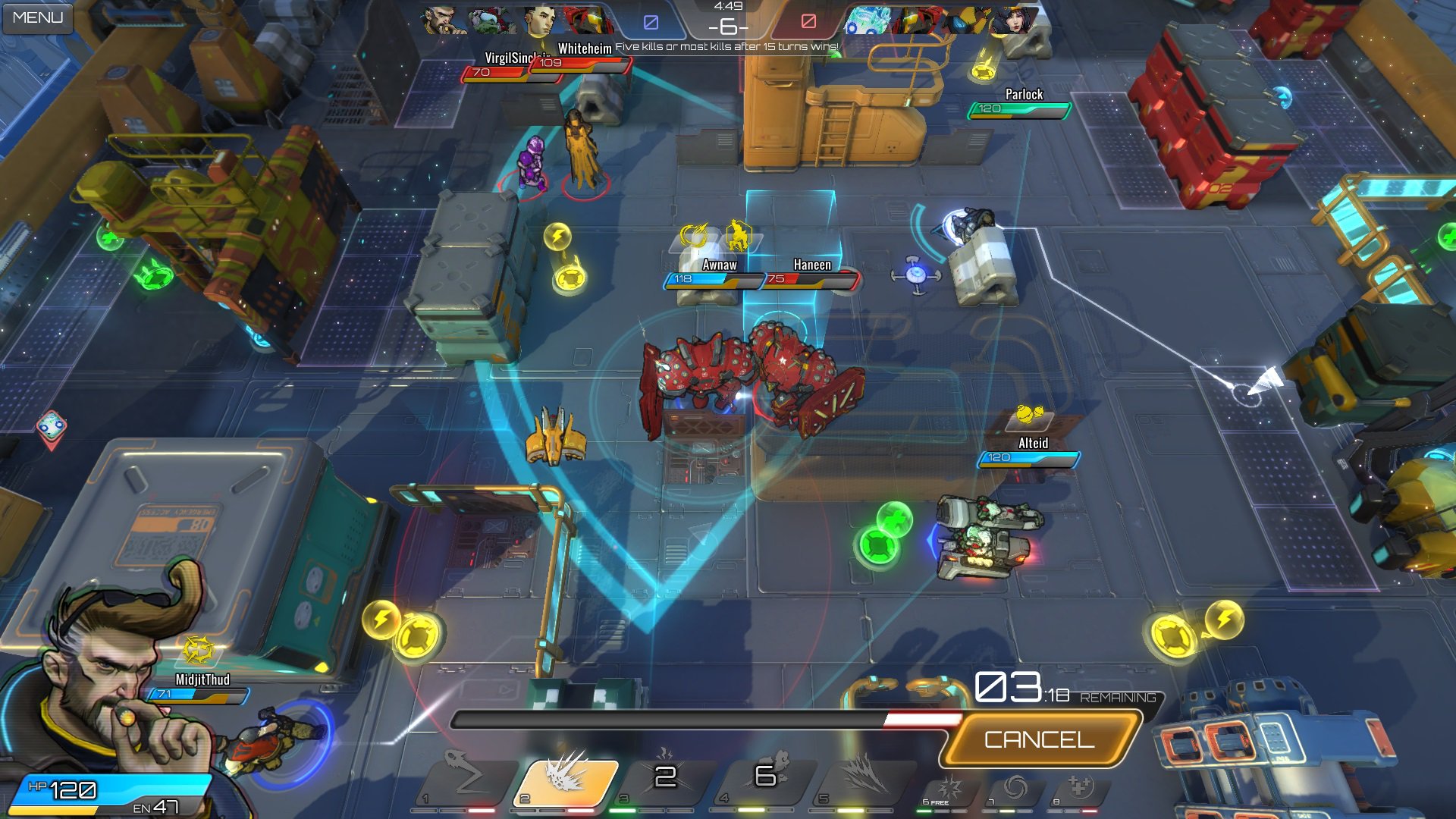 There are a couple of twists along the way. The first is obvious; you only control one character, which allows you to focus. The second is how turns play out, with every turn split into multiple phases and characters moving simultaneously and firing on each other in the same instance. One of the slogans of the game is 'it's always your turn', something which makes the combat move at quite a clip. My first few times I found everything to be confusing as hell, but after a few matches it clicked.

The thing that makes it confusing is the speed at which everything happens, but that's also vital: this is how they make a turn-based game as exhilarating in the moment-to-moment PVP combat as a full-on action-driven MOBA. It works, too - when things start to really pop off in Atlas Reactor, it's very cool-looking and satisfying.

It's almost like placing a bet - you choose your actions and then once others have done the same the game crunches the numbers and places the outcome. Rather than being based on your ability to have a certain number of actions per minute or having impressive micro skills, Atlas Reactor is almost entirely about planning, decision making and predicting what your opponent does. A comparison to chess would be fairly appropriate.

Abilities are split into different categories based on their speed. Things like buffs take place in the green phase, while dashes and other movement-based abilities come in the yellow phase. The final phase, red, involves attacks. The obvious example of how this system pans out is in how meaningful you can make moves such as dashing out of the way if you think an opponent is readying a particularly devastating attack. Given the ability for there to be up to twelve characters in a match and on average usually eight, there's quite a lot of scope for depth here.

Despite the XCOM comparisons (and it really does look like it, especially in the movement UI) one thing that I should make clear isn't in the game is the dice-rolls and RNG that determine hits and misses. Being competitive, Atlas Reactor is about positioning and planning rather than luck.

What's perhaps most satisfying is that the game just feels snappy to play. It was initially confusing, but in a pretty short period of time I began to feel the opposite - slowly, I was convinced of my own tactical genius. In this the game nails that feeling that Overwatch has been so good at imparting to players - that no matter your skill level you're making a contribution and having a positive impact on a match.

More interesting still is that once I got my head around the phase-based nature of its turns I quickly realized Atlas Reactor could be something that'd be rather interesting to watch. I'm not sure how hard Trion intend to chase an eSports angle with this game, but that could work out.

"The game nails that feeling that Overwatch has been so good at imparting to players - that no matter your skill level you're making a contribution and having a positive impact on a match."

I'm a big fan of XCOM, so to see this particular brand of turn-based combat get successfully twisted into a format that'll work with other players is an exciting thing indeed, and it's become a game I plan to keep my eye on and observe how it grows.

On the topic of growth, release format is an area of Atlas Reactor worth discussing. After a lengthy beta the game is out now in a free-to-play format. This'll work in a similar manner to League of Legends or Killer Instinct, where certain characters will be made free-to-play and will rotate on a regular basis. If you want a specific character forever, you can cough up and buy them. Unlike those other games, however, you can't buy them individually - it's all or nothing.

Despite calling it free to play, or free to start, or whatever, let's be clear; Atlas Reactor's free option is more a demo than anything else. Ranked and custom matches are also locked behind the $30/£23 version, making the free offering really just a way to get to grips with the game and little else. There's also a much more expensive version that also includes a bunch of skins and other bonuses.

Even so, that free version makes a compelling argument with its interesting combat, a unique take on how turn-based battles can still work in an online competitive format.

If you're yet to give Atlas Reactor a try, it might be worth dropping that free version into your Steam download queue - its combat might grab you as it did me.