Assassin's Creed 4: Black Flag's new modern day hero will have their faith and loyalty tested in a world falling apart. VG247's Dave Cook quizzes Ubisoft Singapore to learn more about who they are.

(Note: the below article contains Assassin's Creed 3 spoilers. You have been warned.)

Between slicing up guards on the sun-baked streets of Florence and stalking game in the dense snow fields of the American frontier, it's easy to forget that the Assassin's Creed series is about a band of fugitives working to avert the apocalypse in 2012. So thick is Ubisoft Montreal's plot now, that it's difficult to know where all the interwoven pieces fit.

At the end of Assassin's Creed 3, polarising hero Desmond sacrificed himself to protect Earth from a cataclysmic solar flare, and gave humanity a window in which to rally against villainous god Juno. Perhaps the wave of criticism levied against Desmond's character forced Ubisoft Montreal's hand in killing him off, but in Black Flag, the studio has an empty modern stage without a star.

We know that this person is an Abstergo Entertainment employee, but that's the thrust of it so far. I suspect the finer details are being held in reserve for some pre-launch press event - as these kind of reveals often are - so I decided to push Ubisoft Singapore's associate producer Karl Von Der Lutte on the matter when I spoke with him recently.

"With Assassin's Creed 3 we had Abstergo Entertainment 'make' the multiplayer, and that was on a separate disc," he told me. "When you loaded it up you'd see Abstergo. Now in Assassin's Creed 4: Black Flag, everything is Abstergo. Desmond is no more and you, in the present day, play as an Abstergo employee. Your job is to research people that Abstergo find interesting and in this case it's Edward Kenway."

What's interesting here is that our new Abstergo lackey and master pirate assassin Edward Kenway - while living centuries apart - are quite similar. Black Flag's plot opens with the budding pirate as a young adult, already well-trained and capable of holding his own across the perilous Caribbean waters. He's a rogue through-and-through, and lives to pillage, destroy and exploit everything and everyone in his path. He's far removed from the noble warrior that was Connor Kenway. 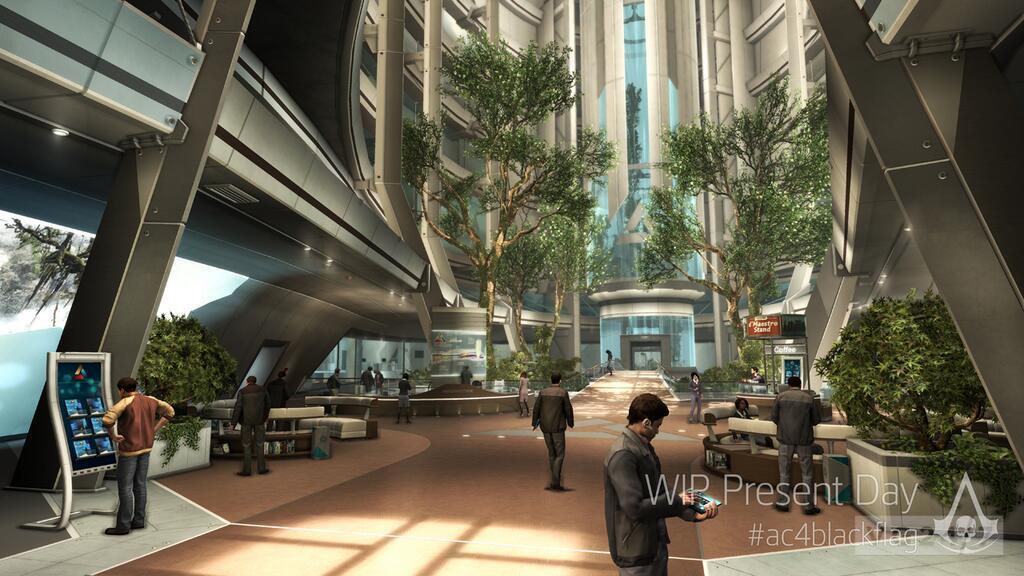 But when Kenway happens across the Assassin Brotherhood and becomes sworn into their ranks, he is reborn as a man conflicted. Torn between his aspirations of greed and notoriety, the promise of spoils and chaos, and the new threat of a hidden Templar agenda, he doesn't know which way to turn. Von Der Lutte continued, "This is what's interesting about him. He's the most conflicted character we've ever had.

"He starts off as a selfish pirate, he doesn't know anything about the Assassin order or anything like that, and all he has is his pirate crew, which is very much after loot, after becoming rich. Then he becomes part of the Assassin Brotherhood and they want something different, so he's very conflicted between his pirate heritage, his selfish ways, and the creed in doing the right thing."

Similarly, our new present-day protagonist in 2013 is an Abstergo employee who dutifully follows orders to research Kenway's life. They are simply following orders until they are contacted by members of the Assassin Brotherhood. Suddenly, the historical war between Templars and Assassins is made clear, and the character's loyalty becomes tested. On top of this, there's still a world-threatening problem to be solved - most likely Juno's reign of terror - but I couldn't get more information on the grander plot.

Regardless, Von Der Lutte continued, "Desmond might be dead but his legacy lives on. You'll come across some familiar characters, at first you'll have no idea about the Assassin's versus the Templars. You're just working for Abstergo but you'll start getting contacted by modern day assassin's who are trying to get you to do certain things for their agency.

"We still have present day missions but you're not a high-flying assassin with lots of free-running abilities and such. It's much more, you're an employee confused about your environment like, 'What is behind this? What are the Templars? What are the Assassins? Why are they trying to contact me?' So it's less about gameplay, more about narrative." 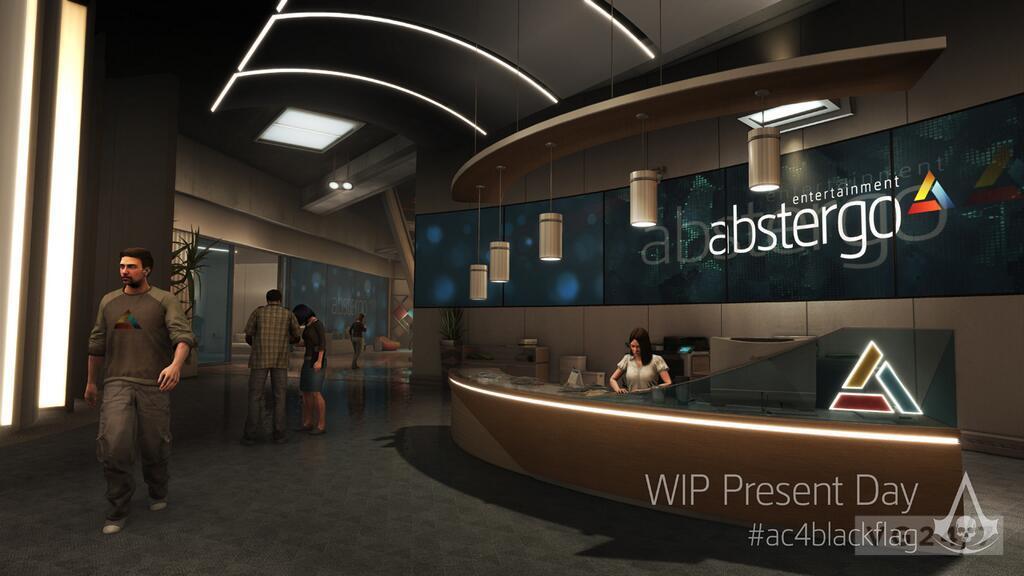 Since it became clear that Desmond was absorbing his ancestor's abilities through the Animus, gamers have wondered what a modern-day Assassin's Creed game would look like. Visions of Desmond free-running along skyscrapers and scaling vast tower blocks got us excited, but the missions we got in Assassin's Creed 3 in particular left a lot to be desired. Unfortunately, while there are playable modern missions in Black Flag, your hero is not an assassin in the making.

The fact that you're an Abstergo agent also spills over from the narrative and also impacts the game's design. You're no longer working alongside a group of tech-wizards tooling around in the Scooby Doo van using an Animus cobbled together from ramshackle parts. You're definitely on the front-foot as a member of the pay-roll. "It's just a nice way of packaging Assassin's Creed and it's really interesting," Von Der Lutte said while pointing to a journalist playing around with the game's Animus loading screen.

"As we see, the Animus is so much cleaner than it ever has been before, because before you've always been hacking into it but now you're actually working for the people who make the Animus, so you can see our UI menus are super-clean, everything is much more crisp. It's no longer about 'sync issues' or anything like that, so it's quite a different take on it. It's an exciting way to take the franchise forward."

Quite who this person is and where their dilemma takes them remains to be seen, but it's clear that many gamers out there are hailing the demise of Desmond as a plus-point, while the promise of a new story arc will give Ubisoft Montreal a solid foundation on which to build a new, hopefully less-entangled tale.