Assassin's Creed 4: Black Flag appears to be this year's follow up to Assassin's Creed 3. It's a pirate-themed game that follows Connor's grandfather Edward Kenway as he explores an 18th century Caribbean.

Ubisoft is holding an Assassin's Creed event tonight, but it seems that some sources couldn't keep their beaks shut until the embargo was up.

First, Kotaku posted an image of an Assassin's Creed 4: Black Flag poster which, when flipped over, revealed the game's world map.

You'll note the location is indeed the Carribean, with locations like Havana, the Cayo Islands and Florida all present. There's also a new Assassin Brotherhood logo that resembles a skull n' crossbones.

The poster shows Edward Kenway steering a ship while fending off pirates with a pistol, which stacks up with the testimony of a source, who claims he saw a Ubisoft document that ran down the game's key points.

The source claims that Assassin's Creed 4: Black Flag is due out 'Holiday 2013', while a second source stated that the game will focus heavily on naval combat and will come with the tag-line, "Survival is the Only Thing Worth Dying For."

The game's trailer is said to feature the music of Johnny Cash and will see Edward Kenway being pursued by officers of the British Royal Navy. We'll have to wait and see about this one.

An alleged Xbox 360 screenshot has also leaked via Examiner. 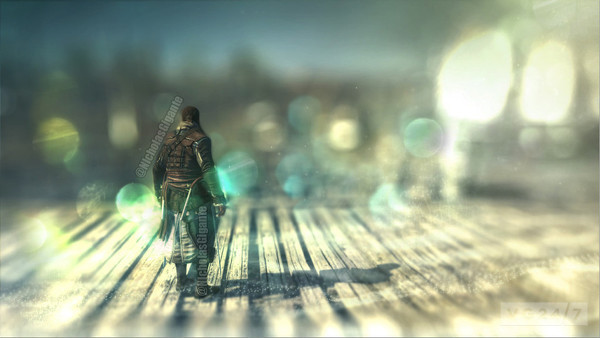 What do you make of the above? Is it too soon for another Assassin's Creed game? Should Ubisoft give it a rest or do you want more?