The recent uproar in the Ark: Survival Evolved community has prompted Studio Wildcard to issue a statement. 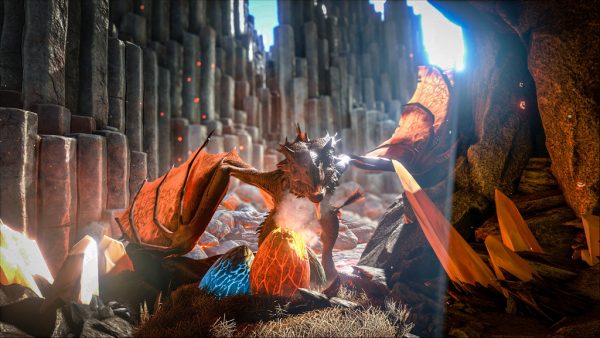 Ark: Survival Evolved developer Wildcard announced and released a new expansion called Scorched Earth earlier this week, out of nowhere. Needless to say, many of the Early Access game's fans weren't very happy an unfinished game has an expansion for sale.

In a new blog post, community manager Jat attempted to explain the studio's point of view, and reiterate that work on the main game has not stopped.

"Put simply: we are absolutely committed to driving aggressive development towards a solid, feature-robust game launch for ARK: Survival Evolved. Everyone at Wildcard wakes up every day thinking about how we can make ARK into a better game today than it was the day before.

"It’s not always easy, but our intent is ever-forward progress towards a retail release that will be far more ambitious in scope and features than our original vision when we launched ARK into Steam Early Access in June 2015. Your feedback enables us to continually expand the game to become better than ever!

"Scorched Earth: Our original vision for ARK always included the creation of Expansion ARKs, along with the infrastructure and technical systems to transfer data dynamically between live ARKs. We determined that it is more sound to iterate on these systems during Early Access than after retail launch, given the significant risks involved if we didn't "get it right".

"While that meant unveiling the first Expansion early, it also means an easier time integrating further post-launch Expansions into the ARK network. We understand that this isn't everyone's cup of tea, and we appreciate the enjoyment people seem to be getting out of this initial view of how Expansion ARKs can work. Now that we have the systems in place to support them, we can ensure minimal integration issues with subsequent releases after ARK: Survival Evolved itself has launched."

The blog post also revealed details of an upcoming creature, the introduction of the backstory, the procedurally generated Ark system and more.