You might have noticed certain weapons and items come with Inscriptions in Anthem, but what do they actually do?

Inscriptions appear at the bottom of weapons and gear and give you bonuses while you're out on Expeditions These bonuses can affect damage, health, armour, elemental damage - you name it, there’s probably an Inscription for it.

When looking at a component or a weapon, you’ll see two icons below the item's description. The Gear icon means that this specific bonus only applies to that particular item. The Javelin icon, as the name suggests, means that the bonus applies to your character.

It’s a good idea to have a solid mix of Javelin Inscriptions that apply to your build across the board mixed in with a few item-specific Inscriptions, like a Strike component.

Arekkz has made a video you can check out which explains the different kinds of Inscriptions available - which we’ve listed down below - if you’re looking for more clarity.

Inscriptions are a random roll and a hotfix has been released to combat some of the useless Inscription rolls players were getting. You're more likely to get an inscription that will either be useful to that weapon or Javelin wide. 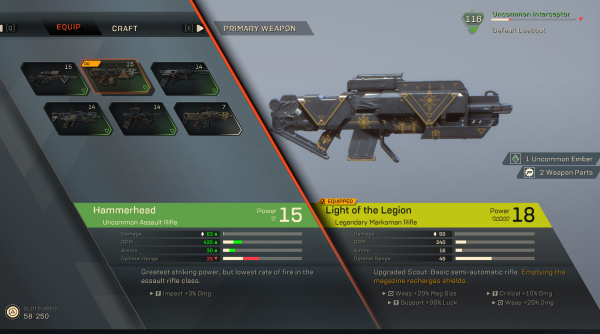 This kind of Inscription increases the rate at which you’ll find ammo, Health and Items.

You can find out how to get Masterwork items, where to find Challenges and how to set up Combos in our ultimate Anthem guide.