Unfortunately, the new Animal Crossing update has made it far easier for scammers to come to your island and steal all your shit.

The new Animal Crossing update adds swimming to the game, which sounds lovely in theory, but actually enables nefarious subterfuge and larceny. One player took to ResetEra in order to share their grievances after having been plundered by scammers in Speedos. 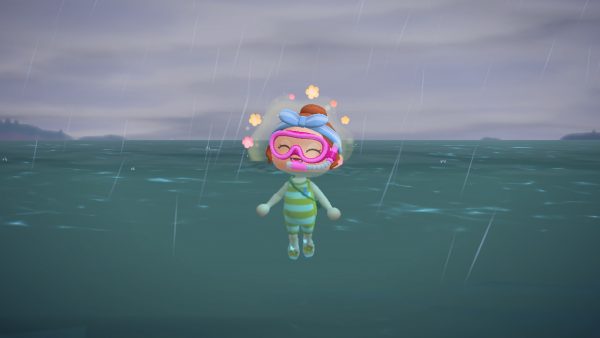 The poster is primarily concerned about how the new update allows scammers to circumvent security systems and steal your shit. While you used to be able to cordon off sections of your island using fencing, protecting your money trees, rocks, and more, now people can just throw a pair of togs on and swim around the back. It may have taken you months to set up your fences in a way that kept all of your valuables safe, but now they're almost completely redundant as protective structures.

"Since the update, some people have found a loop hole: they can just change to the swimwear, jump off the pier, and swim up the shore to get around the fences," writes the poster. "After stealing or causing whatever mischief, the stranger can press the '-' button to 'leave quietly' from the island."

The poster also says to keep an eye out for players who rock up to your island in full swim gear. They're planning a maritime heist, most likely, and once they've robbed you blind they'll be on the next Dodo jet into the unknown, all of your ores and flowers nestled safely in their swimming cap.

Other players reckon it's all a bit much. It's supposed to be a relaxing game, and those missing two pieces of iron ore can just be mined tomorrow instead. Still, there's definitely a divide here - maybe the people saying "give it a rest" are actually the thieves, merely attempting to cover their own waterlogged tracks.

If you're playing the new Animal Crossing update and don't want to be a robber, we've got you covered - here's when and where to find every Sea Creature in the new update, as well as a list of Sea Creature prices.