Age of Wulin delivers the martial arts, colour and romance of Medieval China, cramming them all into a huge MMO experience. Dave Cook goes hands-on.

Developed by Chinese developer Snail Games, Age of Wulin a a free-to-play MMO set in the Medieval China world of Wuxia. It is known as 'Age of Wushu' in North America.

The MMO will launch in Europe at some point this year. Closed beta sign-ups are being accepted now over at the official Age of Wulin site.

Combat is martial arts driven, with 350 skills available across each of the game's eight schools of belief. It's like 'Bayonetta meets Wow' in many ways.

Snail Games has given players the tools to carve out their own emergent stories, guilds and plot, similar to EvE Online. Betrayal, coups and dirty deeds are all possible here.

The prisoner walks solemnly between two imperial soldiers, head bowed in atonement for his crimes against the Royal Guard. His bruised hands bound by rough wooden stocks, he reaches the dank execution chamber and realises that his brothers have left him to die. There will be no rescue today.

Kneeling before his captors, the ruffian takes one last look around the room before the axe blade falls, sending his severed head rolling across the cold, cobbled floor. Justice has been served this day, and the world slides closer towards perfect balance.

So yeah, your Age of Wulin avatar can absolutely get executed if you break too many laws or are generally a dick to the populace. In fact, developer Snail Games has taken the EvE Online approach to world-building, creating a Medieval China rife with laws, penalties, rewards and a working economy.

To be fair, getting beheaded takes a lot of doing and the only real punishment is that your character respawns with a slight de-buff, but still it's a neat system. If your guild members want to free you badly enough they can stage a prison break. I'm only five minutes into my hands-on test with the game and I can see that it has great story potential.

I'm not talking about developer-led narrative either, I'm talking real, emergent stories - the kind of tales that the community makes for itself, such as EvE's Battle of Asakai or the legendary Guiding Hand Social Club heist. These stories help MMOs rise above the glut of bog-standard F2P games out there. 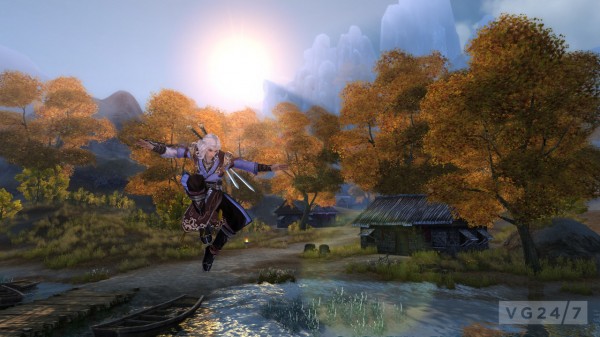 The game takes place in Medieval China - the world of Wuxia to be precise - and is based on real locations you can still visit today. Snail has been careful to keep the game somewhat rooted in reality, so don't expect to fight dragons or beasts here. Instead, martial arts masters and savage wildlife are your primary threat.

That said, there is a wonderful, dreamy romance slant at play, similar to Ang Lee's Crouching Tiger, Hidden Dragon. Your character can learn how to fly briefly, triple jump, wall run and skirt across water silently, as cherry blossoms cascade and twirl in the wind behind them. It looks vibrant and colourful, even if it isn't technically mind-blowing. The tone is dead on.

Brotherhood is a key theme, as players must choose between one of eight schools of belief. You have the tank-like Shaolin monks, the Emei who are fans of healing and buffs, the Wudang who favour area of effect attacks, the swordsmen and woman of the Royal Guard and the Beggars with their drunken master combat style - to name a few.

As you rise up the ranks of your school's teachings - either through training mini-games, completing quests or meditating in areas with high 'chi' energy - you will gain entry to the upper tiers of your faction.

You can even be sworn in as leader by the community, similar to EvE's corporation structure. School leaders can also issue challenges to other factions, sparking huge, 650-player wars.

Depending on your choice of school, characters will have a key enemy faction that will act as your main threat in story quests. Plot aside, you are pretty much free to forge treaties with whoever you like, as guild warfare will play a significant role in the game's PvP element for one. 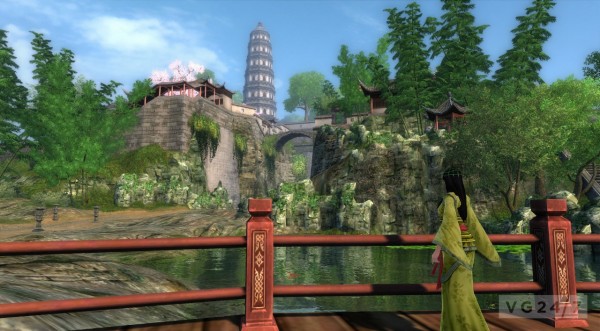 So let's say you're the leader of your own guild within the proud and imperial Royal Guard school. Your natural enemy will be the drunken Beggar faction due to their low class and ill-manners. Your guild can choose to buy one of the 32 castle sites that exist on each server and start to build an impenetrable fortress to keep them, and everyone else out.

Alternatively you can create a guild that serves no one school and make it an open-invite group of up to 400 members. Keeping everyone in the same faction does offer unique bonuses however, but the choice is yours.

You can even pay in-game currency to create tower defence for your castle and embark in 1,300-player guild battles to see who claims it. Needless to say, once you have a castle you will need to defend it from attackers, but the format gives rise to the kind of betrayal and subversion EvE players have known for so long.

It's a tough world out there, but you can choose to play into the emergent story elements as little or as much as you like. Even mechanics such as hunger and the police system I mentioned earlier only come with brief penalties should you starve or get yourself arrested.

There's also a job system that can see your character starting out as a lowly dishwasher, and then get promoted to waiter, and eventually master chef. Progression comes through mini-games and eventually you can start selling your food at stalls found in each city. The scale of the economy is mind-blowing, but it's not as scarily realistic as EvE's.

I keep on going back to EvE Online here, as you can tell. That's because it's rare to see an MMO that gives players this much freedom to carve out their own legend in-game and have it known to the player-mass. It's epic in scope, but underneath it all, combat is king. This is a martial arts game after all. 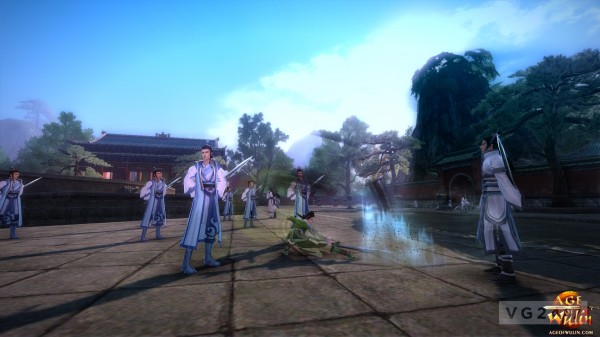 The best way I can describe Age of Wulin's combat mechanic is 'Bayonetta meets WoW' because while battles play out through hotkey commands - as you'd expect - you can create custom combos using small flourishes earned through levelling, and switch combo set on the fly.

So say you have one bar of moves all dedicated to sweeping polearm strikes, and another based on one-inch punches and pressure point jabs - you can flick between them mid-combo to create smart, punishing attack trees. You can also parry and block attacks mid-attack too, just like any good hack n' slash game.

I have to stress at his point that Age of Wulin is not a hack n' slash as attacks are still doled out by mouse clicks and hotkeys, but still, there's a real effort here to put combat at the forefront of the experience. The fluid animation and depth of attacks impressed me as I battered a gang of hunters on the shore of a bamboo forest, for one.

Age of Wulin is coming out in Europe later this year, and it has already seen success in the East and I was told that it's enjoying strong registration numbers in America - where it is known as Age of Wushu.

Fans of martial arts, F2P MMOs and shows like Naruto will get a real kick out of the game, but I'm more interested in the emergent story angle. If Snail Games can really underline the potential for mass wars, coups and territorial struggles throughout its lavish world, it could be a big hit among players.

We'll have more on Age of Wulin as it happens. Let us know what you think below. Should more MMOs give rise to emergent, community-driven stories and shifts in power? Let us know below.