Binary Domain does more than cyberpunk shooting. At Tokyo Game Show 2011, we spoke with producer Toshihiro Nagoshi about chatting and consequence. 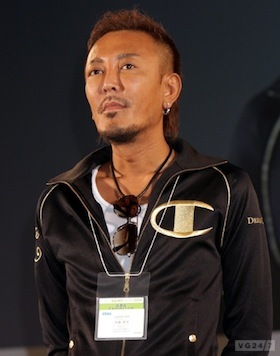 One of Sega's most versatile and respected veterans, Nagoshi has served as designer, director, and producer among many other roles - including voice actor.

Chief creative behind Binary Domain, acting as producer and director alongside Daisuke Sato and Jun Yoshino.

A typhoon is set to break over Japan, and Tokyo is swelteringly hot. Most of us - journalists, developers, and PR alike - have been working (and in some cases, partying) largely around the clock. We're rumpled and smelly, sweaty and exhausted, and we look it.

Nagoshi seems tired, too, rubbing at his eyes and clearly more than a little bored by the endless interview cycle, and yet somehow, he shines like an advertisement for a better kind of human being. Approaching the desk, I shrink in a little on myself, dazzled by the shine on his many heavy rings and bracelets, momentarily blinded by the gleaming reflection of his platinum watch band. He's wearing a near-skin tight black track top with gold detailing, and his hair is an alarmingly pretty orange.

This would be intimidating enough even if I didn't know I was talking to one of Sega's most respected and daring creatives.

Feeling like a reject member of the human race, I predictably want to know about Binary Domain's unusually human character interaction system, whereby players gain the loyalty of their team-mates by talking to them, using voice commands. A-are the virtual people even going to like me? Wh-what if I say the wrong thing?

"The first thing you should know is that the trust system is real time. You don't get a trust level up on each mission. It's a permanent, ongoing thing," the game's director tells me, or rather his interpreter does. Nagoshi doesn't really look at me. At this point, I don't blame him.

"There're so many different variables that determine the trust level - just like in real life. You can play nicely. You can take good care of them. You can treat them nicely to maintain a good trust level.

"But if you do badly in the mission, then after the mission you might get the trust level going down quite a lot all of a sudden.

"The best strategy really is to play yourself - be yourself - and just say what you want to say."

"On the other hand, even if you fight a lot with your teammates, argue a lot during the battle about decisions you have to make, but at the end if you bring the results, after the mission you might gain trust, because you've done your job."

This sounds markedly different even from games which claim to emphasise your relationships with party members, like Mass Effect or Dragon Age. In both these examples, gameplay is so divorced from conversation that you can let a teammate die over and over again and still command fanatical devotion - as long as you only ever tell them what they want to hear. Binary Domain lets you be yourself - it's a true role playing game.

"There's no crystal-clear rule about what you should do to achieve a successful campaign," the director continues.

"The best strategy really is to play yourself - be yourself - and just say what you want to say.

"We were careful not to make an easy way out, so you could do minimum effort to make [all the party members] happy, because it's almost impossible to keep everyone happy.

"Everyone has a different personality. If you always say nice things, it might work for some people - but some of the members might get suspicious, and think you're up to something."

Nobody's going to say that Dragon Age 2's loyalty system was excessive easy to wheedle - but with knowledge of upcoming events and careful juggling of party members, you could manageably achieve either love or hate with each party member in a single play through. Binary Domain? Sorry, completionists - not so much. Nagoshi says the intent is that players won't ever manage a "perfect" run, but have varying levels of trust across the board on each playthrough.

"It's different each time you play. It differs from player to player, as everyone has a different style, and a different personality.

"By using the voice commands, as a tool of communication, it opens up such a variety of possibilities of things you can say. It's really fun to just try and explore, find different things you can say, and see how the AI responds to you.

"The variety of vocabulary you can use and the members [you select for a mission] - it brings you countless possibilities of combinations."

There are at least five team members - Nagoshi counted on his fingers, and seemed a bit vague - and depending on the situation, players may bring along two or three of them. Those who want to hear and see everything are therefore in for a number of play-throughs, and each of these could be between four and 50 hours - and as Nagoshi alarmingly warned, perhaps double that if players really want to explore. Hundreds and hundreds of hours of content, in other words.

That's assuming, of course, that you even manage to discover all the voiced conversation options.

"In terms of the practical phrases, things that you'll need in battle situations like cover, shoot, whatever, we've covered pretty much everything. But apart from those essentials there're quite a lot of things which the AI picks up on and responds to.

The Machine Age Has Begun

"We wanted to bring in some fun elements, so it might be an idea to explore. Users won't get a list of commands with the game. We expect bloggers and the games media will make their own lists. We don't have a plan to release the official list. Maybe if after a few weeks or months people haven't picked up our favourite phrases."

There are even a few Easter eggs in there for those who shoot their mouth off enough. Seeking out all the vocal possibilities presents players with a new kind of challenge not found in vanilla shooters - but also, presents a new way to access the heart of Nagoshi's particular brand of game design.

"Every time I create a game, I really focus on the drama element of the story and storytelling, and what we tried to do in this game was to create a compelling drama. It's really the story of a group of people bonding together, and the best method to show that was by using voice commands as a tool of communication."